With one week until the election, we have a raft of changes in our Senate ratings. Without further ado, here they are:

Earlier this month, we moved Alaska’ Senate race to Leans Republican after a set of polls released by national media outlets pegged his opponent, Dan Sullivan, with a series of 3-6 point leads. But a pair of polls from Alaska-based pollsters Marc Hellenthal and Ivan Moore has given surprising leads (ten and six points, respectively) for Mr. Begich. With Mr. Begich’s vaunted ground game in the equation as well, we’re no longer confident that Mr. Sullivan has an advantage. The Last Frontier is fickle, and this race is back to a Toss-Up.

There is no single reason why we’re shifting Mark Pryor’s reelection bid to Likely Republican, but rather a lack of evidence that he has managed to make Republican Tom Cotton sufficiently unpalatable to Arkansans who have become increasingly hostile to federal Democrats. All five public polls released in the past several weeks have given Mr. Cotton an edge—between two and eight points—and we, alongside the models at FiveThirtyEight and The Upshot, are increasingly pessimistic about his chances, which we now see as little better than Alison Lundergan Grimes’s in Kentucky.

Some on the right are crowing that Colorado will mark the Waterloo of the “war on women” playbook. Incumbent senator Mark Udall made “women’s issues” (ie. reproductive rights, equal pay, and access to contraception) the defining theme of his campaign, so much so that he was nicknamed “Mark Uterus” on the campaign trail. But Mr. Udall failed to tar his opponent, Rep. Cory Gardner, with the brush that defeated Todd Akin and Richard Mourdock in 2012, and the strategy seems to have backfired: Mr. Gardner now holds a small but persistent lead. Democrats hope that Mr. Udall can emulate Colorado’s other senator, Michael Bennet, who won in 2010 despite trailing polls until Election Day, or that the state’s new vote-by-mail system will give them a bump, which we have discussed in great detail here. But we don’t think Mr. Gardner’s edge can be denied at this point, and give this race a Leans Republican rating.

With a relentless barrage of attacks against Republican candidate David Perdue’s history of outsourcing jobs, aided by past and present statements by Mr. Perdue, Democrat Michelle Nunn has pulled into a dead heat in the race to replace retiring Sen. Saxby Chambliss. We may very well be looking at overtime here, since if neither candidate breaks fifty percent—there is a libertarian, Amanda Swafford, on the ballot who should draw 3 or 4% of the vote—there will be a run-off election in January.

Outside groups have poured into Kansas with a single message: independent businessman Greg Orman, despite all appearances, is actually President Obama. And it has had the effect of cutting into the high-single-digit leads that Mr. Orman held over Republican Sen. Pat Roberts immediately after Democrat Chad Taylor dropped out of the race. While Mr. Orman holds a very narrow lead—after all, Mr. Roberts remains quite unpopular—it seems that the state’s strong Republican bent is throwing Mr. Roberts a lifeline. This race will go down to the wire.

The slow death of the campaign of Republican Terri Lynn Land, once the improbable leader in the race to succeed Sen. Carl Levin (D-MI), is now complete: she trails Democrat Gary Peters by double digits and there will be no suspense in Michigan on Election Night. Similarly, despite the narrowness of Al Franken’s election in Minnesota in 2008, a serious race never materialized here and it seems that he too will cruise by double digits next week.

While we are not changing our rating in South Dakota, we want to acknowledge that Republican ex-Gov. Mike Rounds looks much stronger than he did a few weeks ago. Independent (and former Republican Senator) Larry Pressler’s shoestring campaign has melted under the spotlight, and Democrat Rick Weiland has not benefitted as much as Democrats might have hoped. Mr. Rounds has a lead similar to those of Mr. Peters and Mr. Franken, but we’re leaving it at Likely Republican due only to the sheer weirdness of this race: we would be very surprised if Mr. Rounds lost, but this race has had its fair share of surprises. 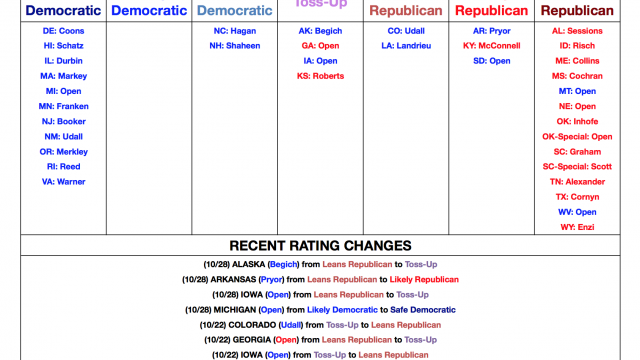