Trevor Potter is a leading campaign lawyer, nationally recognized for his experience in compliance programs, campaign finance investigations, and questions concerning lobbying registration and disclosure of federal and state ethics rules. He is the former Commissioner (1991-1995) and Chairman (1994) of the Federal Election Commission. Potter is the founding President and General Counsel of the Campaign Legal Center, a nonprofit organization that monitors campaign finance activities across the country. In 2008, Potter was recognized as a “Super Lawyer” by Washington DC Super Lawyers magazine. He served as General Counsel to the John McCain campaigns in 2000 and 2008. Potter leads Caplin & Drysdale’s Political Activity Law Practice.

The Politic: Today you lead the political law practice for Caplin & Drysdale. How did you become Stephen Colbert’s lawyer?

Pure good luck! His staff called me on the recommendation of a former law partner of mine when they were seeking a lawyer who knew about PACs (political action committees). We spoke, then they asked if I would be willing to speak with Stephen Colbert directly. When I did, he asked if I would be willing to discuss PACs on the Report. Only after I was interviewed by him on air the first time did he decide he wanted to explore this issue by creating his own PAC and asked me to help him as legal counsel. 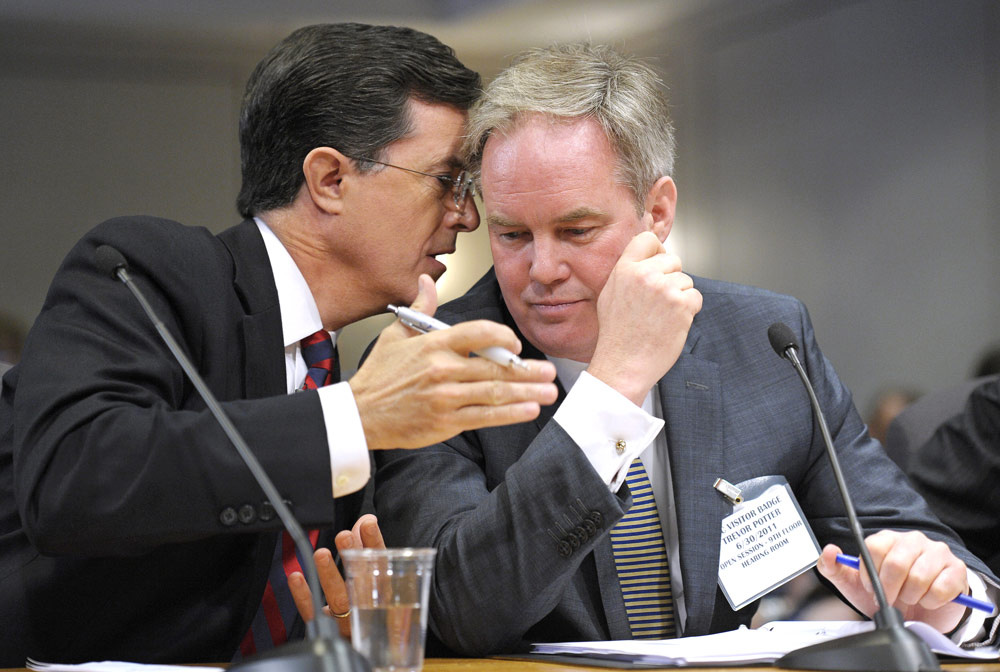 The Politic: What was your initial reaction when Mr. Colbert asked you to start a Super PAC?

I thought it would be a wild ride — which it was. The fact that I was working with a genius — both in terms of Stephen Colbert’s ability to understand complex legal issues (right up there with top Supreme Court lawyers) and his ability to synthesize those issues into an ongoing series of four minute discussions in humorous form — made it a rare and very rewarding professional experience of educating the public while accomplishing my client’s objectives.

The Politic: How did Citizens United change the election cycle, and where do you see the future of Super PACs?

The Supreme Court’s Citizens United decision was predicated on at least two assumptions that proved to be false: that the new corporate independent spending would be fully disclosed, so shareholders could hold their corporations accountable and voters would know who was funding political communications, and that the wave of new outside spending would be “completely” independent of candidates and parties. Instead, much of the money spent on election advertising in 2012 was from secret (not disclosed to the public) sources, and Super PACs and other “outside” spending was by groups created by persons closely connected to candidates and political parties, with candidates and their aides closely aligned with major funders of these groups.

The Politic: Is there hope for legislation to regulate Super PACs? What kind of political challenges will Congress face in revising this legislation?

The first reform we need is the “full disclosure” that the Supreme Court said in Citizens United that we would have — and which it declared in the only 8-1 portion of that decision was not only constitutional but necessary for our system of campaign finance to work. This could come from court action (overturning FEC regulations, which currently allow non-disclosure contrary to the provisions of [the] McCain-Feingold [Act]), FEC reconsideration of those regulations, other regulatory actions, or Congressional passage of disclosure legislation such as the revised DISCLOSE Act introduced by Senator Sheldon Whitehouse.

Beyond that, we have to look at the way that current fundraising practices are consuming enormous amounts of legislator time — to the exclusion of the work members of Congress are sent to Washington, on taxpayer salaries, to accomplish. This is even true of the President in a re-election year — President Obama is reported to have attended at least 222 political fundraisers in his re-election year, a number incredibly disruptive to his full-time job of being President of the United States.

The Politic: You are the founder, President and General Counsel of the Campaign Legal Center, which emphasizes campaign finance laws. Why did you create this foundation and what work have you done?

The CLC defends existing disclosure laws and other regulations of money in politics in the courts when they are challenged, and works to educate the public and lawmakers on problems with our current campaign finance system and ways to improve it.

The Politic: What are the most common misconceptions that Americans have about campaign finance?

The most common misconception is that we have a “system” of campaign finance regulation — meaning that anyone actually intentionally created the way the current laws work. In reality, what we have are “systems” created by Congress, with major portions struck down or altered by the Courts (or undermined by regulatory action or inaction), with no one author of the resulting hodgepodge of requirements.

The Politic: How have you seen campaign finance changed since you served as Deputy General Counsel to George H.W. Bush’s 1988 campaign?

Back in 1988, corporations and unions were strictly limited in what they could do in federal elections, the FEC was an active watchdog agency with a credible enforcement role, Presidential candidates of both parties participated in the Presidential public funding system, spending by outside groups was fully disclosed, and members of Congress spent far less time raising campaign funds (and had no personal leadership PAC accounts to double-dip for). It was a different, and vastly simpler, world.

The Politic: As former commissioner and chairman of the FEC, what do you think it will take for the FEC to act more efficiently?

The deadlocks in Commission votes, and resulting gridlock, could be altered by a majority of Commissioners taking their jobs of enforcing the law seriously. Absent that, some sort of tie-breaking mechanism to allow the FEC to work its way through deadlocks is necessary.

The Politic: What advice do you have for students interested in the legal profession?

Law can be a very fulfilling profession if you are doing work that interests and challenges you. Find an area of law (by trial and error if that is how it goes) that makes you want to get up in the morning.

Dana Schneider is a contributer to The Politic from Pittsburg, Pennsylvania. Contact her at dana.schneider@yale.edu View more posts