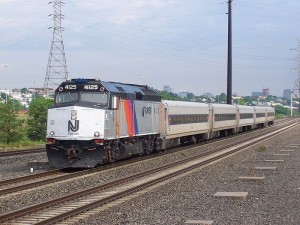 t is hard to imagine a place to which public transit is more vital than my beloved home: New Jersey. While I disdain the characterizations of Jersey as some industrial wasteland, I cannot help but appreciate this John McPhee quote describing the Garden State: “Of the great unbroken city that will one day reach at least from Boston to Richmond, this section is already built.”

If Americans are a people in motion, and northeasterners are a people in a hurry, then New Jerseyans are a people on hyper-drive. Easy access to the urban centers of the northeast as well as the beach means that denizens of New Jersy are often trying to get somewhere: to a baseball game in Philly, to a play in New York, to a weekend at the shore, to a concert in Camden, to a conference in Princeton, to a flight out of Newark (hey, there are also lots of fun things to do in Newark!). This leads to a lot of highways and, with a lot of highways, comes a lot of traffic—and a reputation for Jersey drivers as less-than-polite.

New Jersey also loves Amtrak. More than half of New Jersey’s college-bound high school grads leave the state for their higher education, and many flock to schools up and down the northeast, especially in places like Boston, New York, Philadelphia, Baltimore and Washington. It is no surprise that two of the main train hubs New Jerseyans use—New York’s Penn Station and Philadelphia’s 30th Street Station—are two of the top three busiest Amtrak stations in the country. And the Newark, NJ station is the 14th busiest in the nation, despite Newark’s standing as the 67th most populous city. Indeed, seven of the top 11 busiest stations are frequent destinations for NJ travelers: New York, D.C., Philadelphia, Boston, Baltimore, New Haven and Wilmington.

Okay, so what is the significance of all this?

As mass transit surges in popularity and usage, it is crucial that places like New Jersey innovate and experiment to make it even better. These ideas can then be exported throughout the region and the country. How about start small?

Think about E-Z Pass. It works at bridges and tolls throughout the northeast. Why don’t we demand the same of our Metro Cards? New Jersey, New York and Pennsylvania already collaborate on transit—it is past time to start collaborating on a ticketing system, too. One simple card that works for all major systems in the region—NJTransit, PATH, PATCO, SEPTA and MTA—would simplify the lives of millions of commuters, and likely bring in more revenue for the transit networks, as well.

New Jersey should also look into the prospect of a PATCO-esque system for the South Jersey beaches. This could be transformative as the region recovers from Hurricane Sandy. With the way license-less youth flock to the shore in the summer, the ability to hop from beach to beach without getting on the road would be huge. Further bolstering the shore’s lagging economy would be a direct Atlantic City-New York City line, instead of the failed attempt that ran through Philadelphia.

New Jersey needs public transit. But public transit also needs New Jersey as a ground for innovation and improvement. New Jersey’s transportation infrastructure is vital for the economy of the northeastern United States. Hopefully, in the years to come, it takes advantage of this importance.

Speaking of transportation infrastructure, isn’t it about time we got high-speed rail?

More on that next week.