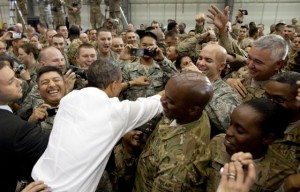 “Just because we have the best hammer does not mean that every problem is a nail,” President Obama quipped in his commencement address to the West Point Class of 2014.

The last time Obama delivered an address at West Point at the 2009 commencement, he unveiled the plans for the troop surge in Afghanistan. Yesterday, Obama stayed on point with regard to the end of the War in Afghanistan, reaffirming his commitment to withdrawing American combat troops by the end of the year and emphasizing the importance of transferring responsibility for the security of Afghanistan to local forces. The irony of his reversal wasn’t lost on the crowd or the President; Obama took a moment in the address to reflect on the four dead and countless wounded cadets who had sat in the same audience five years ago for his announcement.

For the bulk of his remarks, Obama built upon his nod to Mark Twain in order to outline his concept of post war American national security. He downplayed the role of traditional “hard” military power, emphasizing instead the importance of a diverse national security policy focused on strengthening international institutions, combating climate change to safeguard American resources, providing medicine and foreign aid to American partners, and supporting fledgling democracies with diplomatic and economic assistance. It is important to note that Obama explicitly reserved the right to respond unilaterally or in a coalition with lethal force, spanning the gamut from drone strikes to invasions, if the threat is significant enough to warrant such a response.

He emphasized, however, that the primary role of United States military force in the next years will be to train and advise military forces from allied nations in order to conduct campaigns without American combat support, pledging five billion dollars to such programs. He made several comments about Eisenhower in regards to these policies; Obama is trying to craft a foreign policy focused on military advisors, one reminiscent of Truman’s or Eisenhower’s as opposed to the military adventurism of Bush or Johnson.

Despite his efforts to connect his policies with previous presidents’, Obama was quick to point out that the Cold War was over. He cited the sanction campaign and backlash from groups such as the G7, as well as the successful Ukrainian elections, as evidence that Russia had been contained. Obama also commented on the other “nails” America faces today and the importance of pursuing nonmilitary solutions for all of them. For example, he noted the success of Iranian nuclear talks, the promise of a U.S. backed Burmese-North Korean split, ongoing efforts to resolve border disputes in the South China Sea through established international courts, the importance of American aid in the ongoing conflict in Syria, and the need to close Guantanamo Bay in order to boost American legitimacy abroad in the global fight against terrorism.

Aside from Gitmo, The President’s only mention of domestic politics was a comment lamenting the lack of coherent policy on climate change due to internecine partisan infighting. He made no mention of the ongoing scandal involving the Department of Veteran’s Affairs.