No, Chris Christie has not locked up the Republican presidential nomination.

Neither has Marco Rubio.  Or Paul Ryan.

Despite the intense speculation already surrounding the 2016 race for the White House, it is impossible to say with any modicum of certainty who will be the GOP nominee for President.  Indeed, in the history of the modern Republican Party, there has never been an election remotely close to this one.

Every presidential race since the days of transistor radios has featured a Republican nominee that was “next in line.”  A safe white guy who had patiently waited his turn.  2008’s John McCain and 2012’s Mitt Romney were still sporting battle scars from their previous White House bids, if you’ll recall.  This time, however, there does not appear to be any man (or woman) standing in the queue.  This time, while plenty of bull may be slung around, there are no old bulls.

In 2008, the leading Republican candidates included a 72-year-old who had served in Congress since 1983 (McCain); a 73-year-old who was first elected to the House in 1979 (Ron Paul); and four former elected officials who, between them, had nearly a century of experience in GOP politics (Romney, Mike Huckabee, Fred Thompson and Rudy Giuliani).

In 2012, the field had, if possible, even more political longevity.  Romney and Paul — four years grayer — ran again.  Rick Perry was the longest-serving governor in the history of the state of Texas.  Newt Gingrich and Rick Santorum, congressional leaders from another century, and Jon Huntsman, who began his career in the Reagan administration, ran as well.  Even Michelle Bachmann and Herman Cain, the freshest faces of the group, had each been active in politics for decades.

This time around, the GOP is instead dominated by political tenderfoots (tenderfeet?) like Rubio, Paul Ryan, Rand Paul and Ted Cruz.  Also-rans Rick Perry and Rick Santorum may indeed take another swing at the ball.  But neither inspires much fire-in-the-belly anymore in the Republican Party.  Today, the young bucks run the show.  And that is what makes the 2012 race so inherently unpredictable. 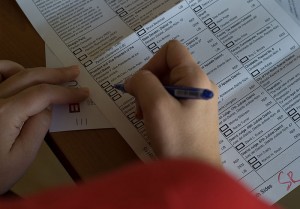 Unlike, say, John McCain, who arrived on Capitol Hill before one current House member was born, the potential 2016 frontrunners have relatively short paper trails.  Most of McCain’s skeletons were out of the closet by his 2000 run — and certainly by the 2008 bid.  The 2016 contenders, however, have not been similarly vetted, making each little more than a Twitter caricature.  Ryan is the attractive budget wonk.  Paul is the feisty libertarian.  Rubio is the suave swing-state Hispanic.  Christie is the brash Jersey Shore-ite.  Yet once they step onto stage as presidential candidates, we’re likely to learn a lot more about their political burps and hiccups.

Christie, for instance, is a moderate on two of the GOP’s big G’s: guns and gays.  He’s also a thin-skinned, overweight time bomb of a blue-state politician.  Oh, and there’s that great footage of his bromance with President Obama, every Republican activist’s favorite guy.  Paul, on the other hand, holds a host of extreme views completely unpalatable to foreign policy hawks and social conservatives (who make up roughly 150% of GOP Iowa caucus-goers).  Ryan is the group’s most prominent loser and seems unenthused about sticking his neck back out, while Rubio — who is rumored to have a number of skeletons in his closet from his time in Florida politics — greatly angered the base by embracing comprehensive immigration reform.  Ditto for Jeb Bush, the most senior GOPer to be pursuing — rather unconvincingly, given his straight-talking pragmatic bent — a run as well.  And Cruz, well… he didn’t even know he had dual Canadian citizenship until this week.

The race’s dynamics will not be clear until the field crystallizes.  Right now, Christie is the most moderate likely candidate.  But a centrist Martinez bid would completely alter that narrative.  Similarly, a candidacy from the hard-liner Cruz would somewhat diminish the Paul’s libertarian street cred.  And if Hillary Clinton decides to take the plunge, Martinez, Fallin and Ayotte will begin to look particularly enticing in that Sarah-Palin-circa-2008 kind of way.

For now, we are far too far out, with far too amorphous a field, that’s far too poorly known, for anyone to speak with any authority about who will win the GOP nomination — let alone the White House — next time around.  At one point, if you recall, Virginia Gov. Bob McDonnell looked to be among the top tier of promising 2016ers.  And now look at him!

All of which is to say that the guy at the water cooler who swears by President-elect Christie is not full of wisdom.  He’s just full of it.