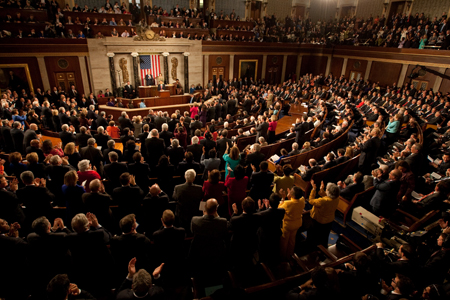 Representative Bill Foster (D-IL) and Representative Rush Holt (D-NJ) share an atypical background: they are both particle physicists. Serving respectively since 2008 and 1999, they are currently the only two physicists in Congress, a body made up mostly of lawyers and career politicians, where members with technical backgrounds – such as engineers, economists, and scientists – are rare.

The Politic had a chance to hear from both Foster and Holt, who shared some of their thoughts, based on their congressional experience, about the connection of science and technical training with policymaking, an overlap which includes much more than science policy.

Foster and Holt were each interviewed individually, and were asked separately, without an opportunity to listen or respond to one other, to open-endedly comment on science and politics, particularly in the US Congress.

First, I would say that it’s not so much the technical training that we need, it’s the ability to think like a scientist. Those are two different things – you don’t have to be a scientist to think like a scientist. By thinking like a scientist, I mean asking questions in ways that they can be answered based on evidence, and then subjecting your answers to scrutiny by others so you don’t become trapped in a self-delusion. That’s what science is, and that’s what is so rare in politics. In politics, people often are looking for confirmatory evidence, to convince themselves or their supporters that they’re right, rather than looking for evidence to provide the best answer.

The other thing I would say is that there is no inherent incompatibility with science and politics. It’s true that most politicians don’t think like scientists – either they refuse to, or, more likely, aren’t even aware that they can have evidenced-based thinking. I think it’s entirely too common that scientists avoid politics and politicians avoid science.

Technical training certainly can be valuable, in any kind of work. I always like to see people majoring in sciences. It’s the only way of thinking, but it is a very useful way of thinking, whether one goes into business, law, or public affairs – any number of things. Even more than that, I just want to see more citizens, more people, thinking critically: thinking like a scientist. Too often, people fall victim to fallacies of thinking and distractions that take them away from the real issues at hand. Continually asking and refining questions so that they can be answered empirically – with evidence – is a much better prescription for getting towards future-oriented solutions that will hold up over time.

Politics is almost always practiced with an eye towards the here-and-now. It’s the temporary balancing of interests, whereas science always has an eye towards the future. Scientists, whether in the physical sciences, life sciences, or even social sciences, are always looking for an application of what they know in realms where they don’t.

Darwin’s thoughts on evolution weren’t just relevant to the beaks of finches on the Galapagos Islands; it turned out that kind of thinking is essential in understanding antibiotic resistance of bacteria. Scientists can take a well-developed pattern of analysis for beaks of finches, and extend that to modern-day medicine. Similarly, physical scientists will say that the same laws that lead an apple to fall from a tree may be what guides planets in their orbits or galaxies in their spirals.

The idea of extending your thinking to new realms and situations is one of the things that makes science so valuable, and is not very common in politics. It is rare to find a politician who wants to extend a developed way of thinking into new one.

As a result, politicians are not very good at confronting the future – climate change is a very good case in point. It is not really the uncertainty in climate change that has prevented us from dealing with it. It is an excuse that people use for not passing carbon taxes, for not really building infrastructure that will be ready to withstand the next superstorm. People use the natural uncertainty ingredient in scientific study and analysis as an excuse for inaction, when really they are just unwilling to think about the future, even though they’re quite capable of doing so. They choose not to, and use the excuse that “there’s too much of an element of uncertainty for us to make the kind of commitment we need to make.”

I think climate change is a particularly good example where people who have practice thinking like a scientist – so that would be mostly, scientists – approach climate change very differently from politicians. They approach it as something that is likely enough, even certain enough, that it demands action, and that the effect on people in the future will be costly and deadly enough that it demands great action. Politicians find it too easy to put it off, and so we drift toward catastrophe, with more and more superstorms, rising sea level, acidification of the oceans, barges running aground in the Mississippi, farmers driven out of business by droughts, and so forth.

It’s remarkable to look at the composition of the legislatures of different countries, and it says a lot about both countries and the behaviors of those legislatures. For instance, if you looked at the Politburo – when I had done this a few years back – of China, 24 of the 25 members were engineers or scientists, and they had one lawyer. If you looked at the European Commission, it was roughly an equal mix of what I would call “technical people,” lawyers, and everything else, which you can think of as career politicians or something similar.

In the United States Congress, it’s a roughly fifty/fifty mix of lawyers and career politicians, and about 4 percent people with – a very generous definition of – a technical background, including large animal veterinarians and economists. Then you have about 4 percent that could be called scientists or technical people. So you see [the differences] very strongly in the behavior.

For instance, you can talk about a max-min problem [a problem that involves finding the minima and maxima of functions using calculus] with the Politburo in a way that you couldn’t with the average member of the US Congress. When you talk about, “what is the average fraction of the GDP to nationalize in order to maximize economic growth,” it’s clearly not zero – zero is Ethiopia, or Yemen, or somewhere like that. It’s also clearly not 100% – because that’s North Korea – but there’s clearly some maximum in between. These are concepts familiar with someone who knows calculus, and this the kind of discussion that can permeate the thought patterns of scientists and engineers, and that is often lacking in political debate.

The other biggest difference in scientists’ – and particularly engineers’ – outlook is the instinct to try to put even an approximate number to an argument. If you’re a scientist or engineer and you see a problem, the first thing you do is to try to get a size of the numbers associated with all of the design criteria for the solution you’re coming up with.

Often, you can get the correct policy decision even with a rough number, good to a factor of two or sometimes a factor of ten. By just writing down a list of arguments on one side and arguments on the other, you can find that one argument on one side is two orders of magnitude larger than everything else. Then that settles the discussion.

But, in politics, the reaction is to consider all the arguments on both sides of an issue, and then figure out which one is most convincing to the voting public. So, the logic and often the result are very different.

I think there’s a real merit to having some significant fraction of your legislative assemblies with a strong technical background. I personally represent exactly 50% of the strategic reserve of physicists in Congress. Almost every issue that comes up has a scientific or technological edge to it, whether it is internet freedom, or just economic growth. Almost anything you can name has a technical facet to it, and particularly in those areas, there really isn’t a substitute for having someone in the discussion with a technical background to discuss it.

Since a lot of what you end up arguing about is economics, I’m equally frustrated with the lack of economic sophistication in Congress today. My mother worked for Senator Paul Douglas in the ‘50s. My parents actually met on Capitol Hill – my dad worked for a different senator – and Paul Douglas is the Douglas in the Cobb-Douglas production function, which is in textbooks today and is actually at the heart of macroeconomic models that are used for policy debates. He’s a guy who invented one of the fundamental concepts in economics, about 70-80 years ago, and then went on to become a US Senator, and was very involved in the national debate.

I was on Financial Services during the collapse, [and reviewed] the regulatory response, the Dodd-Frank Bill, the Wall Street reform bill, that was the response to the crisis. We had, giving testimony, one of the experts who actually operates and designs one of these big macroeconomic models. A lot of debates that we’re having are actually debates about the magnitude of various coefficients in macroeconomic models, and there is no substitute for having people who understand the weaknesses of mathematical models and complex processes. I think that’s another area where more scientific and statistical understanding would be powerful and useful.

Congressmen Foster and Representative Holt were additionally asked for a brief comment on how to improve the situation in the future and advice they had for current college students.

There are two ways to fix this, one of which is to have people to go on to technical fields and careers enter politics. That’s the way I entered; I started out in business. I started a company that makes most of the theater lighting equipment in the US, and after running that for about 10 years went back to Physics graduate school at Harvard and spent most of my career in particle physics. So, I have had a rather diverse career, and then entered politics with that background.

The other way is for people with political careers – particularly during their undergraduate and graduate educations – to stay very connected to quantitative science. Even if you stay in political science, you want to take a lot of computer code, and statistics and calculus.

The answer is always – everything that ails us is – education. The first answer is both the easiest and most difficult answer, I suppose, and I think that it is to help everyone, especially non-scientists, understand that you can think like a scientist, that you can and should ask questions so they can be answered empirically and verifiably.