“I don’t remember much of that day when I got my test back, but what I do remember is being in a tiny white room with a complete stranger, 18 years old and frightened,” recounted Kecia Larkin.

On September 11th, 1989, Larkin, a Canadian woman from the Kwa’kwa’wakw and Peigan First Nations in British Columbia, was diagnosed with HIV. She acquired the virus through unprotected sex and sharing intravenous needles with her boyfriend of 8 months who discovered his HIV+ status too late. Now in her 40s, Larkin is a leading advocate for HIV awareness in Canadian aboriginal communities. She believes the Canadian federal government has been complicit in the deaths of indigenous people living with HIV and that major changes are needed to take place to fix a system that has been broken since the AIDS epidemic began.

Larkin is not alone in her dismay towards the Canadian government and its treatment of indigenous people. In October 2015, indigenous communities across Canada flocked to the polls to participate in national elections for a new Parliament and Prime Minister. Voter turnout on Canadian indigenous reserves broke election records. Some communities in the riding (electoral district) of Kinora, which includes more than 40 First Nations, claimed a 270 percent increase in voter turnout. The reason given by countless indigenous people who turned out to vote was quite simple: they were fed up with Stephen Harper, the recently ousted Canadian Prime Minister, and his conservative government’s continued neglect of indigenous issues. Of the many grievances indigenous leaders harbored against the Harper administration, one of the most pressing was its failure to provide basic health services to indigenous communities and acknowledge the growing HIV/AIDS epidemic. Now with the election of Justin Trudeau as Prime Minister and his Liberal Party to Parliament, indigenous leaders are optimistic that their often ignored pleas for redress will be answered and that the issue of HIV in their communities will be tackled.

As expected of a developed country with a highly effective healthcare system, Canada has one of the lowest HIV/AIDS rates in the world, with less than 0.5 percent of Canadians living with the virus. However, a completely different reality exists within certain Canadian indigenous communities where up to one in every twenty­five people has HIV, a rate higher than some sub- Saharan African countries. These rates are increasing: one in eight new Canadian cases are attributed to indigenous people who only compose 3.8 percent of Canada’s total population.

Art Zoccole, former President of the Canadian Aboriginal AIDS Network and current Executive Director of the Two Spirited People of the First Nations explained to The Politic that these numbers are disturbing. But, he added, data on ethnicity is limited due to overlap from multi­racial backgrounds. This means that the actual rate of HIV/AIDS in indigenous communities is almost certainly higher.In addition to skyrocketing rates of HIV/AIDS transmission, Canadian indigenous reserves face numerous other health inequities. The rates of chlamydia among indigenous populations is seven times higher than the Canadian average, and the same is true of most other STIs.

Zoccole attributes the increased rates of these diseases to the higher incidence of unemployment, homelessness, and poor educational opportunities on reserves. The Center for Disease Control (CDC) provided similar information to The Politic with regards to American Indians and Alaskan Natives, saying that the higher risk of HIV infection in these communities is a direct result of the immense poverty afflicting many indigenous people. The health crisis on Canadian indigenous reserves is not solely a result of the Canadian government’s neglect but also of historical abuse. Michaela Grey, Deputy Director of the Native  American AIDS Prevention Center,explained, “A lot of our people still face historical trauma from  being relocated off the reservation lands to other areas, and this is generations of historical trauma impacting them.”

Just as in the United States, the Canadian government established Christian residential schools in the 19th and 20th centuries to “civilize the savages,” which included beating and flogging those who spoke their indigenous language or practiced any religion besides Christianity. Although there were many allegations of “cultural genocide,” these schools remained open and mandated attendance until as recently as the 1950s. Numerous reports by health organizations and personal testimonies by indigenous people have linked the egregious state of indigenous health to intergenerational trauma accrued from genocide, residential schools, and other factors like physical, sexual, and psychological abuse. 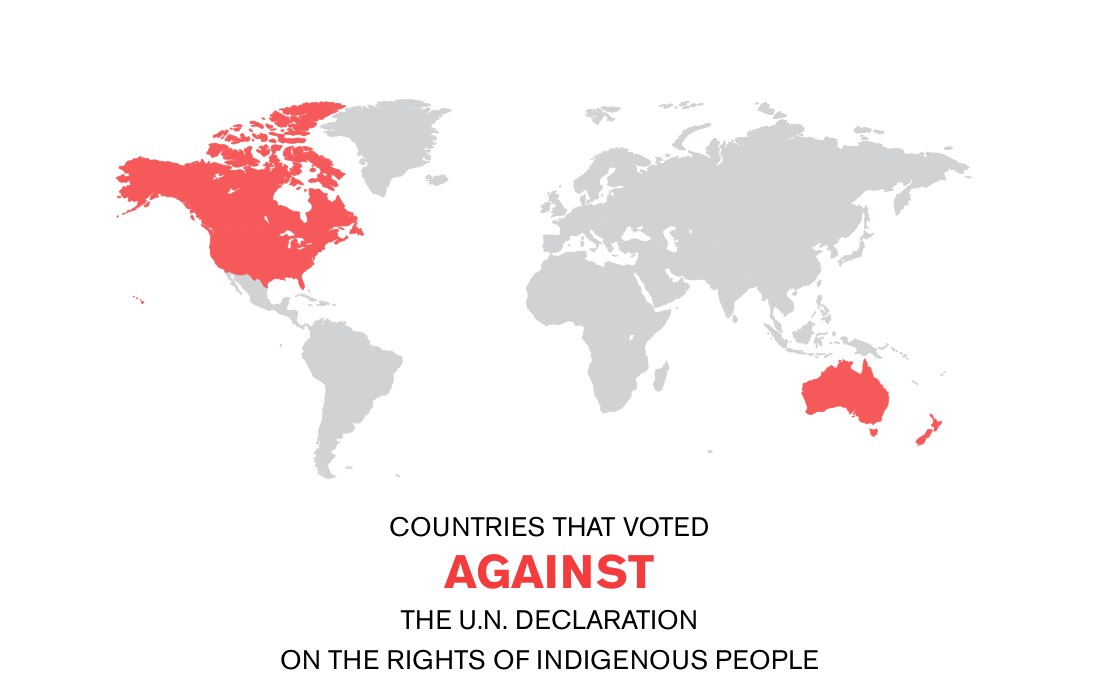 With such clear evidence that Canadian indigenous communities continue to be neglected and abused, tribal leaders question why the conservative Harper administration still ignores them. Grand Chief Steward Phillip, President of the Union of British Columbia Indian Chiefs, recently criticized the Harper government on the Canadian Broadcasting Channel for its sidestepping the discussion about indigenous issues unless it explicitly served a particular interest – which was usually a land request from the oil industry. On the international stage, Harper declined to sign the United Nations Declaration on the Rights of Indigenous People (UNDRIP), calling it “aspirational,” although 144 countries are signatories and only three other countries (Australia, New Zealand, and the United States) also refuse to sign it.

In the realm of HIV/AIDS policy, Harper drew international criticism when he refused to implement the UNAIDS 90­90­90 target that seeks to ensure that by the year 2020 that 90% of people living with HIV will know their status, 90% of those diagnosed will receive antiretroviral therapy (ART), and 90% of those on ART will have viral suppression. Julio Montaner, Director of the British Columbia Centre for Excellence in HIV/AIDS and former President of the International AIDS Society, lamented the decision and declared that Canada has the capacity and resources to implement the 90­90­90 target. Larkin articulated her grievances more bluntly: “Harper killed a lot of people in British Columbia.”

In his election campaigns, Harper said he would slash welfare costs in half, and the results were devastating. Hordes of people lost their much­needed government benefits and disability status because of funding slashes, and Larkin personally witnessed the fatal consequences when one of her friends found no alternative to the loss but suicide. She also emphasized that the experiences on the ground in these communities are different from the national picture. Although the Canadian government is spending millions on HIV/AIDS, the vast majority is going to research organizations such as the one led by Montaner, leaving little to tangibly assist communities in need.

But Canada is not alone in its neglect of indigenous communities; its neighbor to the South has also been accused of maltreating its native communities. Grey believes that the U.S. government is not doing enough to address health inequities affecting Native Americans, saying, “We need funding applied to native­specific organizations that actually do work in these communities.”He also referenced the lack of cultural competency among government health workers. The CDC acknowledged these limitations, admitting that “because of confidentiality and quality- of ­care concerns and a general distrust of the US government, some American Indians and Alaskan Natives may avoid Indian Health Service,” the arm of the Department of Health and Human Services responsible for providing care to indigenous communities.

In Canada, Larkin believes that these confidentiality concerns are warranted. In small communities on reserves, tests are not always conducted in confidentiality, and she explains that the “auntie” of someone who works at the medical clinic could very well spread word of someone’s status to the rest of the community. Fear of the repercussions prevents people from getting tested, since immense HIV stigmatization often leads to violence against and even expulsion of HIV+ individuals from their communities.

The dire situation facing Canadian indigenous communities then explains the record turnout at the polls in October’s elections. In fact, turnout increased by so much that supplies of ballots on reserves across the country were running out. And these massive voter mobilization efforts were not made in vain; the new Parliament predominated by the Liberal Party is one of the most diverse, including ten indigenous representatives. Trudeau has also committed to diversity, making his cabinet the first to include an equal number of women and men. His cabinet is also culturally diverse, including Minister of Justice Jody Wilson­ Rayboud, a former Crown prosecutor and member of the First Nations.

Wilson ­Rayboud’s appointment is a part of Trudeau’s broader campaign platform, which committed to building “a renewed relationship with indigenous peoples on a nation ­to nation basis.” Trudeau also promised a government investigation into the countless cases of missing and murdered indigenous women and girls. According to Amnesty International, aboriginal women are three times more likely to be victims of a violent crime and four times more likely to be murdered than non­-aboriginal women. A report by the Royal Canadian Mounted Police shows that 1,200 of these cases remain unsolved, although most agree the number is much higher. This statistic has drawn condemnation from the U.N. Human Rights Committee, which called it a “failure to provide adequate and effective responses to this issue.”

Although Trudeau has yet to formally present a plan to address the HIV/AIDS epidemic in the First Nations, a spokeswoman for the Public Health Agency of Canada has assured The Politic that the government recognizes the problem and considers it a priority. Still, Trudeau’s high­profile promises and the steps he has already taken to promote diversity and indigenous representation in politics have made health and indigenous leaders alike optimistic about the future after nearly a decade of the Conservative Party’s rule.

Lamenting the previous administration’s neglect, Zoccole said he was “very uncomfortable with the Conservatives.” But his mood shifted to optimism when he explained that Trudeau’s election is good “not only for HIV, but for the indigenous communities of Canada in total.” Still, those who mourn the countless indigenous lives already lost to HIV/AIDS continue to demand immediate change, saying that the government’s response is not nearly enough and that its reaction is already decades too late.