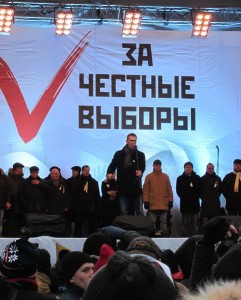 On September 9th, for the first time in a decade, Moscow held mayoral elections. Yet even two days before the polls opened, civilians had already taken to the streets of the Russian capital in protest. They contested the legitimacy of the election’s results before the first ballot had even been cast.

In spite of expectations of corruption and fraud during the elections, Moscow’s residents found themselves confronting a surprising result: Oppositionist candidate Alexei Navalny had received 27.2 percent of the vote. Although Sergei Sobyanin, the candidate supported by President Vladimir Putin, had won the election with 51.3 percent of the vote, Navalny — a lawyer, a blogger, and now a Yale World Fellow — had edged closer to winning a seat at the table, a prospect once unimaginable.

In an interview with the The Politic, Robert Shlegel, a deputy in the State Duma and a member of Putin’s dominant United Russia party, dismisses the gains of the oppositionist movement. “Vladimir Putin enjoys a significantly higher level of support than the government. In my opinion, our society has learned a lot over the past twenty years and appreciates the political stability… [our society] does not want to fall into the arms of the first [new]comer.”

To galvanize support, achieve electoral success, and shape Russia’s destiny, oppositionist forces will have to face down Vladimir Putin’s personality cult and overcome perceptions of radicalism. An even more difficult challenge, however, may be addressing the movement’s internal disunity and disorganization.

Navalny is considered a leader of the opposition, but the movement is an umbrella organization that lacks an official leader or unified goals. In order to coordinate protests and to support political campaigns against the United Russia party, oppositionist groups formed the Russian Opposition Coordination Council. In October 2012, what has been called the “first fair election in Russia” produced 45 members of the council elected by over 80,000 Russians, within and outside of Russian borders. The candidates who received the most votes were Navalny, chess grandmaster Garry Kasparov, writer Dymitry Bykov, and Ksenia Sobchak, a socialite activist also called the “Moscow Paris Hilton.”

Anton Tsimbler, a protester and a former intern for Russian oppositional media outlet TVRain and now a student at Columbia University, explains the oppositionist alliance as a coalition rather than a political party. “We have some leaders who are politically placed differently, but who have the common goal of fighting corruption and trying [to] make this government honest. So in that respect we are unified. When the question will come, because I believe it will, of who will run against Putin for the next election… the fact that the opposition is not unified is going to be quite a problem.”

Commentators have deemed the Coordination Council an opportunity for celebrities to get media attention, and parliamentary parties refused to field any candidates. Divisions within the council give the United Russia party opportunity to belittle the council; Shlegel did his best to downplay the council’s relevance to The Politic. “This structure gave many minutes of laughter. The inability to negotiate, problems with legitimacy, lack of content, banality, sheer stupidity, selfishness, motiveless ambitions and many other qualities were demonstrated by these wonderful people. In general, it is a failure and not a serious story.”

Perceptions of the Coordination Council are driven by the personalities of its most prominent members, who tend to be polarizing figures. Many are undecided about the stance of Sobchak, for instance, who entered political life after achieving celebrity status from television shows and appearances in the Russian Playboy magazine. Sobchak is also well-connected with leaders of the United Russia party; Her father, Anatoly Sobchak, was a mentor to Putin.

Navalny himself is perhaps the most divisive member of the oppositionist camp. During protests in Moscow on December 24, 2011, Navalny stood on the Sakharov Prospect in Central Moscow and was greeted by a crowd of 80,000 supporters. “I can see that there are enough people here to seize Kremlin and the White House right now. We are a peaceful force and will not do it now. But if these crooks and thieves try to go on cheating on us, if they continue telling lies and stealing from us, we will take what belongs to us with our own hands.”

Tsimbler recounted his experience at the protest to the The Politc: “The atmosphere coming from the stage on Sakharov was very violent, Navalny was still in his phase when he was using a very right-wing rhetoric, he yelled that we could [take the] Kremlin. Any violent words, any violent rhetoric that comes to us from the stage really puts us off. We try to ignore it and try to make the opposition know that we do not like it.”

Navalny has been described as the most dangerous man in Russia, in part due to his divisive nationalist rhetoric. Some believe that he is the perfect person to lead the opposition to a new government but would not want to see him as leader of the country. Over the last few months, however, Navalny has worked to reposition himself as a more moderate candidate. “I think that he has done a great job of attenuating his nationalism in the past couple of months. Before, in 2011, I would have never thought about voting for Navalny but now I fully support him in the mayoral elections, because he has played down the nationalist rhetoric, he has demonstrated that his first goal is to overthrow the system and to bring honesty,” said Tsimbler.

Although some Russians see Navalny as a leader, Shlegel positions him as an inexperienced radical who lacks broad appeal. “His program was not something amazing and new. He managed to expand its network of activists, which gives some perspective on the Moscow city Duma elections next year. …Of course, he’s a bright character, but too radical and not very informative. He does not have any experience in the field of state power…Citizens do not vote for the opposition candidate or party if they know that their coming to power would mean radical changes. The majority of the public doesn’t want them and are afraid of abrupt movements.”

Many Russians credit Vladimir Putin with strengthening Russia over the last decade and reestablishing stability within the country. Putin enjoys support from a wide coalition of Russians, including “Generation Putin” — “Nashi”, or “ours” in Russian — an organization of 150,000 youths that held street protests in favor of Putin.

In 2013, oppositionists have organized only three major protests. “We were very excited about everything that was going on but now we have started feeling that the protests are quite useless…we just don’t bother going,” laments Tsimbler. “We try to resort to other means, we try to write, we try to release the information, we try to raise awareness…[Until the next election] all the opposition can do is debunk the lies of the government, draw attention to the corruption, [and] draw attention to unjustly punished oppositionists. Apart from that we can’t really do anything.”

According to Shlegel, “If the opposition wants to come to power, it is not enough to desire loud shouts and support in the Western media. The opposition needs to grow, gain experience of real work in the government at any level, and achieve success in this work to strengthen the trust of a wide circle of voters, and not [just] small groups in big cities.” But if the opposition finds itself shut out of power in an unfair system, one wonders how it will gain that experience.

Yes, the Russian opposition is growing, but it has hardly budged the political status quo in Russia. Navalny is an annoying rash to Putin rather than a mortal wound. The Russian President can still call on the public as his balm: Before talking about a revolution, or a transformation, let us remember that most Russians still believe in Mr. Putin’s strong rule.