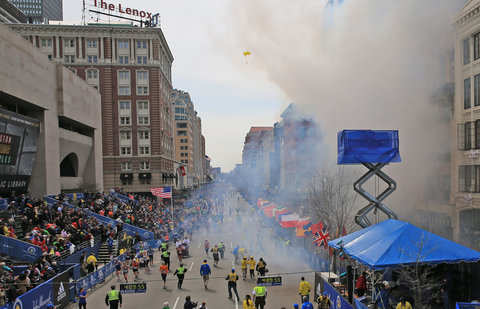 As the details of the tragic Boston bombing continue to unfold, Washington – like the rest of the country – is still reeling from the news. This week had been earmarked as one critical for both gun control and immigration reform, yet both issues have been sidelined for now.

Senators Chuck Schumer (D-New York) and John McCain (R-Arizona) had expected to introduce an immigration reform bill at a press conference today, before being postponed “out of respect” for the people of Boston. The White House had also slated this week to be a battle for gun control, with the White House’s Weekly Address being delivered not by the President but rather by Francine Wheeler, a mother of one of the victims of the Sandy Hook massacre. Ms. Wheeler, accompanied by her husband Dave, had exhorted the country to push for gun control reform so that “real change [can] begin.”

Yet as Dave Axelrod, a former advisor to President Obama, said to the National Journal today: “Major national calamities like this tend to freeze everything else.” While other issues supported by the White House will likely be shelved for a few days, lest the White House been seen as insensitive or playing politics with a national tragedy, other politicians may find it hard to resist.

Rep. Steve King (R-Iowa) linked the possible identity of the Boston bombing’s perpetrator with the immigration reform bill Senators McCain and Schumer will roll out soon. “If we can’t background-check people that are coming from Saudi Arabia, how do we think we are going to background-check the 11 to 20 million people that are here from who knows where?” he said to the conservative National Review.

Former Congressman Barney Frank (D-Massachusetts) will also likely be feeling backlash after he argued that the authorities’ swift response to the episode demonstrates the utility and efficacy of local, state, and federal government. Frank continued to argue for a strong government by belittling the conservative call for tax cuts. “No tax cut would have helped us deal with this or will help us recover,” he said “This is very expensive.”

As of the time this piece was sent to publish, the Boston marathon bombing had claimed three lives and injured more than 175 people.