Listen closely to the Ukrainian national anthem, and you will understand the spiritof Ukraine. For the Ukrainian people, indeed, the song is a reminder and a comfort for all those times when we feel at a loss, for all those moments when we question whether tomorrow will be better than today. All throughout history, Ukraine has been beaten, Ukraine has been broken. But Ukraine has not been defeated. Ukraine is not dead. Its people have risen up, ready to fight for their homeland. It is the spirit that lights up the Maidan, the capital Kyiv’s central square; it is the spirit that calls on the Ukrainian people to come together and unite under the gold and brilliant blue of their nation’s banner to call for a better future.

This past winter, Ukraine stood on the verge of European integration. Its citizens desired to welcome a union with a West that acknowledged the law — that believed in democracy and the will of the people. On November 21, 2013, however, it became clear that President Viktor Yanukovych would not sign the Association Agreement with the European Union. Instead, three years’ worth of negotiations and hope for a better future suddenly proved useless for the Ukrainian people. Instead of turning to the West, Yanukovych’s regime sought to strengthen economic ties with Russia.

So began the massive “Euro Maidan” demonstrations in Kyiv. Angered by broken promises, some 50,000 youths took to the streets in peaceful protest, calling on the government to sign the Agreement. When Berkut special police fiercely attacked student protesters on November 30, 2013, the nature of the Euro Maidan protest fundamentally changed. The marches and meetings no longer concerned just European integration; they became a stand against a brutal and corrupt government willing to attack its own citizens.

The next morning, more than a million protesters gathered in the streets of Kyiv.

Who stands on these streets? Who are these individuals willing to stay out in the cold for months, to put their lives on the line, for a better Ukrainian future? They are grandmothers with bright kerchiefs on their heads and memories of Soviet repression in their hearts. They are men like my friend Maryana’s uncle, who leave their family homes in order to stand up for their homeland, their Батьківщина. They are industrial workers, farmers, businessmen and women, educators, artists, and doctors, from Kyiv and across Ukraine.  They are Christians, Muslims, and Jews, praying together with guidance from the Maidan stage. Their protests are peaceful, religious, hopeful, and empowering. As Timothy Snyder, a leading Ukraine scholar, so aptly puts it, the Euro Maidan represents the “unification of the unconnectable.” The quest for an effective and democratic state has fostered collaboration among groups with seemingly opposite ideological and social foundations.

But for all of the groups involved, the revolution of the Euro Maidan would be impossible if not for the students and young professionals who have risen up. Even though the media touts a geographic, East-West divide, it is actually a generational divide that has taken root in Ukraine. Having grown up in a free and independent Ukraine, the youth are not willing to give up their nation’s independence from powerful outsiders. They have learned about a history of Russian oppression, they have read Ukrainian poetry, and they know the songs of Ukrainian freedom.  They demand a government that truly serves the people of Ukraine.

I, too, find myself among these youths, although living far from the main stage of the Euro Maidan.

Sometimes, I find it hard to explain just exactly how I am Ukrainian. I was born in America; my parents emigrated from Poland. My grandparents were displaced to Poland’s Recovered Territories as a result of Operation Vistula in the 1940s, when the Soviet-dominated Polish authorities forcibly resettled Poland’s Ukrainian minority in formerly German territories.

From before I can remember, this deep Ukrainian spirit was instilled within me. Ukrainian was my first language. Until the first day of preschool, I was only “Ania,” not knowing that I had another name — an American name — Anna. While other children slept in and watched Saturday morning cartoons, I went to Ridna Shkola — Ukrainian School — and learned all about Ukrainian history, culture, and language. I joined the Ukrainian American Youth Association, and kept the mantra of “God and Ukraine” close to my heart. As I read the poems of Taras Shevchenko, I found great strength and conviction in his words, in his willingness to fight for the future of his homeland — for a freedom greater than could be achieved in his lifetime.

But it is not just the nationalistic poetry and songs that drive the Ukrainian youth. It is an indignation with the injustices of the past and a deep desire for a future free of Moscow’s tight grasp. Speaking with Dr. Walter Zaryckyj, the executive director for the Center of U.S.-Ukrainian Relations (CUSUR), I realize how profoundly the collective memory of the Holodomor, Stalin’s 1932-1933 genocide by famine of the Ukrainian people, reverberates as the threat of Russian occupation looms. The Holodomor was Stalin’s attack on Ukrainian intelligentsia, religion, and peasantry. Zaryckyj argues: “There’s a conscious element of nation breaking. It isn’t just famine. The Ukrainians have a lingering memory of a previous union with the Russians that nearly broke the back of their nation. In fact, some say, it did break them.” With as many as 7.5 million Ukrainians killed, mainly through starvation, Raphael Lemkin, who coined the term “genocide” and drafted the Convention on the Prevention and Punishment of the Crime of Genocide, called the Holodomor the “longest and broadest experiment in Russification — the destruction of the Ukrainian nation.”

Soviet propaganda continues to undermine the Ukrainian battle for independence, for freedom, for a unified national identity. In order to weaken Ukrainian identity and incite separatist attitudes, Russian President Vladimir Putin plays on historical and cultural differences to instill a sense of fear in Ukraine’s Russian speaking population. As a means of promoting Russian intervention in the region, Putin warns that the protests and new Ukrainian government are made up militant neo-Nazis who represent an immediate danger to the population of Eastern Ukraine. As argued by the historian Norman Davies, this neo-Nazi propaganda find its origin in Ukraine’s “vexatious ideological trap” of World War II, in which the struggle for national liberty “demanded of them not to fight only against Hitler but also against Stalin.” Ukraine’s fight against the USSR was twisted into a battle in support of the Nazis, conveniently allowing for the perversion and dismissal of future nationalistic movements.

Although militant members of groups such as Right Sector have been implicated in violence over the course of the Euro Maidan protests, these actions should not weaken the legitimacy of the interim Ukrainian government or diminish the otherwise peaceful efforts to rid the country of Yanukovych’s corrupt, undemocratic regime. While Yanukovych supporters tout the interim government as a coup, the dissolution of his government was a legal process carried out on January 28 by the Verkhovna Rada, Ukraine’s parliament. Over the course of Yanukovych’s term in office, the government embezzled $8 billion to $10 billion a year from the Ukrainian state, as noted by economist Anders Aslund, engulfing Ukraine in an immense fiscal crisis.

On January 16, Yanukovych’s Party of the Regions passed a series of controversial anti-protest laws, which have since become known as “dictatorship laws.” Essentially banning public demonstrations, these laws called for up to 15 days in prison for participating in rallies or for wearing a hat that makes identification difficult. They call for up to six years for blocking access to a public building. Following the institution of these laws, Yanukovych ordered a crackdown on the Euro Maidan protests; under an executive order from Interior Minister Vitaly Zakharchenko, Berkut forces and riot police were dispatched in a violent offensive against demonstrators in Kyiv. The city was alight in flames, Molotov cocktails flying through the air, barricades overturned, heavy-handed Berkut forces, shields in hand — the scenes more reminiscent of a violent video game than reality.

The bloody riots littered the ground with 100 dead and over 570 injured, eventually resulting in Yanukovych’s flight from Kyiv. With the brutality of the attacks, Ukraine’s Euro Maidan suddenly became a focus for the media — Ukraine’s protests and the determination of the Ukrainian people finally gained center stage. As I received relentless BBC updates, I realized that amidst the violence, the world had a chance to witness a true Ukrainian revolution —  the Ukrainian people have stood up for what they believe in, they have raised their voice, and they have brought about real change in their nation.

The Ukrainian people, however, were not given much time to celebrate their victory. When the torch of the Sochi Olympics was finally extinguished on February 23, Russia did not wait long to begin its intervention in Ukraine. Starting on February 27, “unidentified” armed men seized government buildings on the Crimean peninsula and hoisted Russia’s flag. Russian soldiers took over Crimea’s airports and hundreds of Russian troops headed toward Simferopol, seizing control of the strategic Black Sea peninsula.

International law meant nothing to Putin in his attempts at expanding Russian power and “protecting” Russian-speaking individuals in Crimea. Although Ukrainians often have no expectations for Russia’s promises, it was the U.S. and U.K. response, or lack thereof, that left Ukrainians most frustrated and vulnerable. In 1994, the Russian Federation, the United States of America, United Kingdom, and Ukraine signed the Budapest Memorandum, which included security assurances against threats or use of force against the territorial integrity or political independence of Ukraine in exchange for Ukraine giving up its nuclear weapons.

Yet this promise seems to have fallen on deaf ears. On March 16, Russia went forth with the Crimean referendum and annexation. 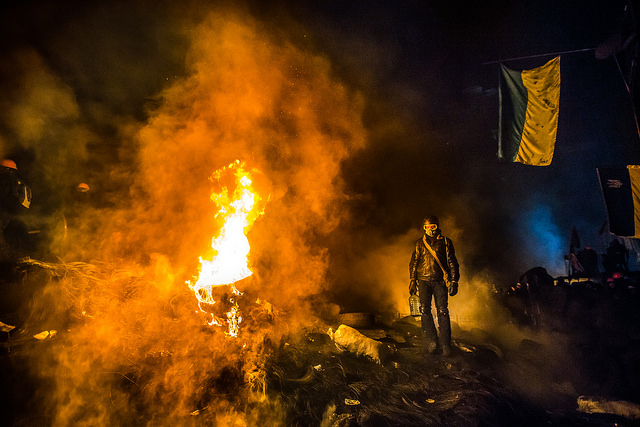 An intense sense of uncertainty looms. Crimea has been taken, gas prices have been raised, provocateurs have been sent into the eastern regions of Ukraine, and Russian troops have been assembled alongside Ukraine’s borders. Everything seems to change too quickly; globe-changing politicking occurs in an instant; and the world wonders — can only guess, in fact — how Putin will go in asserting his power. For all the articles analyzing Putin’s body language or exploring the inner workings of his psychology, there is so little certainty in what the future holds.

We may allow ourselves to be overwhelmed by this uncertainty, by our anxieties, but I want you to remember the Ukrainian people. Remember them as people —  as mothers, brothers, friends. Support their fight for independence, for freedom from corruption — their fight for their homeland, their Батьківщина.

While Russian threats continue to escalate and fear grabs at their hearts, Ukrainians have not stopped making progress, they have not stopped moving forward. The European Association agreement that started the Euro Maidan protests has been signed, a new class of politicians is coming forward. The coming May 25 elections will bring the Ukrainian people toward a more democratic nation. Don’t forget them in the face of Russian aggression. Just remember: Ще не вмерла Українa. Ukraine is not dead! Ukraine will rise up again!