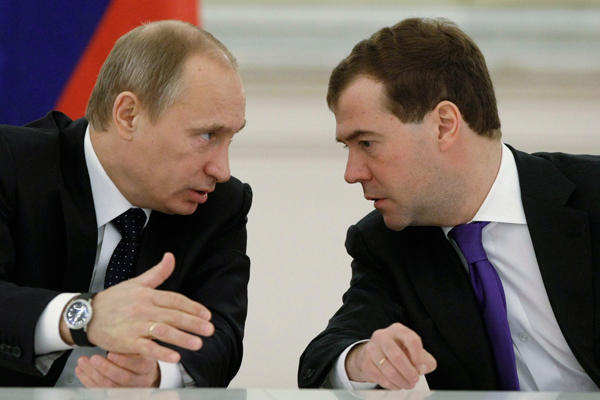 Since his first presidential election in 2000, Vladimir Putin has found — and created — ways to maintain his solid grasp on power. When Putin assumed office, Russia’s constitution only allowed for presidents to serve two consecutive terms. So in 2008, after his second term, Putin placed his close political ally Dmitry Medvedev in the seat while he assumed the role of Prime Minister. The Medvedev government extended the term limit for presidents from four years to six beginning in 2012, exactly when Putin would once again be eligible for the presidency. He won the 2012 elections, but only after the most credible opponent, Grigory Yavlinsky, was tossed from the ballot due to a technicality. Election monitors reported widespread voting irregularities.

While Russia has a clear majority party, Putin’s United Russia, the opposition is much more fragmented. The three opposition parties — the Communist Party, Liberal Democratic Party, and A Just Russia — each occupy seats in Russia’s lower house, but even the most popular minority candidate amassed only 17 percent of the popular vote in the last presidential election.

Experts point to Russia’s history to explain the lack of unified opposition. Living in a nation whose past is fraught with conquest, revolution, and civil war, Russians have come to prefer security in their leadership and fear radical changes. After transitioning away from Soviet rule in the 1990s, Russia struggled with market liberalization, and sank into a economic depression in 1998.

Boris Kapustin, a professor in Yale University’s Ethics, Politics, and Economics program who originally hails from Russia, sat down with The Politic to offer his take on his mother country’s political situation. “Putin’s electorate predominantly consist[s] of average Joes and plain Janes who are basically politically indifferent — apolitical persons, one might say — and whose fundamental motivation is fear,” he explained. “They support Putin lest ‘it becomes worse,’ lest the country sink again in the inferno of the ‘market-oriented reforms’ of the nineties and unmanageability.”

For the opposition to even make a dent in the next election, it must convince voters that it is not something to fear. Yet, to accomplish this goal, opposition parties would have to first improve their organization. According to Kapustin, “The Russian opposition as it exists today is fragmented, fraught with internal rivalries and inarticulate about nearly everything except for the electoral fraud perpetrated by the government and its control over the courts of justice. These themes are undoubtedly important but they cannot reach out to the depoliticized ‘Putin’s majority’ and ignite their imagination.”

However, Putin does not derive all of his power from his people’s fear of radicalism. In the past, anti-dissident laws have thrown legal roadblocks in the way of opposition members trying to form parties or protest. New laws introduced under Medvedev make it easier to register political parties and allow for a much larger portion of seats to be elected to individual candidates, rather than by party-line voting. While this may sound like a move toward political liberalization, in practice it has only strengthened United Russia’s power.

The number of political parties has jumped from seven to over seventy, weakening all of them in the process. Only the three main opposition parties have any real presence.  Meanwhile, independents in the Duma, Russia’s assembly, often vote with United Russia in order to move up the political ladder and gain the executive’s favor.

“The real problem partly lies in getting access to the media, which over the past fifteen years has been almost exclusively state-owned,” said Kathryn Stoner, Deputy Director of the Center on Democracy, Development, and the Rule of Law at Stanford University, in an interview with The Politic. “The opposition is given almost no access to television during the campaigns, or if they are, it is in the mornings when no one is watching. The Internet is not that big in Russia yet, so right now it only gives the opposition access to the demographic they’re already reaching [the upper-class, educated citizens].”

Even though the opposition has won elections, such as the mayoral contests in the cities of Yekaterinburg and Petrozavodsk, they have struggled to enact substantive reform. In order for politicians to help their constituencies, Stoner said, they must be pragmatic, and it is impossible for them to do so without cooperating with the bureaucracy dominated by Putin’s loyalists. In this sense, some of the opposition’s problems are structural.

Yet, this is not to say that the opposition’s goal of consolidating political power is impossible. If Russia’s economy continues to stagnate, many experts predict voters will increasingly turn to Putin’s rivals.

“The IMF projects that Russia will have a 1.4 percent growth rate, which isn’t nothing, but when you’re used to 8 to 10 percent and you attribute that to Putin’s policies, then that’s pretty disappointing,” Stoner said. “And all indications are that that’s going to happen.” Indeed, global energy prices, like those for the oil that Russia produces, will likely continue to drop, and fracking in the United States is poised to reduce the West’s need for foreign energy.

Russia’s changing demographics also present an opening where new ideologies could form. As the country develops, Russia’s middle class is projected to grow from roughly one-fourth of the population today to one-third of the population by the end of the decade. The administration has typically derived its power from the political elites who made their riches while they once held offices. The apathetic lower classes, meanwhile, are often uneducated. The Russians of the middle class, who are educated enough to care about politics yet not rich enough to control the Kremlin through their pocketbooks, may instead try to influence the country with their ballots.

Will Putin continue to rule past the end of his term in 2018? Without major changes in either the issues surrounding Russia or the opposition’s organization, the answer is no. It will almost certainly take a galvanizing event, like a crisis or prolonged economic downturn, for Russians to unify politically and form a legitimate opposition. Today’s opposition parties are all lacking not only a popular figure like Putin, but also a common cause around which to unite their people.

Until Russians from across the political and socioeconomic spectrum create achievable goals to rally behind, there is no reason to believe their voting habits will change.