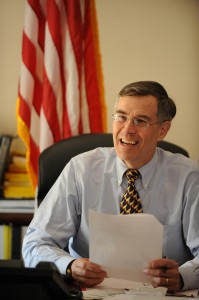 Rush Dew Holt, Jr. has served as the U.S. Representative for New Jersey’s 12th congressional district since 1999. Holt, a Democrat, is a former professor of public policy and physics at Swarthmore College and Princeton University, and is currently one of two physicists in Congress. In 2013, Holt sought the Democratic nomination for U.S. Senate in New Jersey’s special primary election, losing to Newark Mayor Cory Booker. He is the only Quaker in Congress, as well as the son of U.S. Senator Rush D. Holt, Sr. (D-WV). He is also one of two current members of Congress to have appeared as a contestant on Jeopardy! (The other is U.S. Senator John McCain.) Holt graduated with a B.A. in physics from Carleton College in 1970, and later received a Ph.D. in physics from New York University in 1981.

The Politic: First off, thank you for taking the time to talk to The Politic. It sounds like things are absolutely crazy over there at the moment.

Yes… it’s sort of a sad time, you know, to see what the legislative process has fallen to.

The Politic: Do you think that the deal is going to get passed tonight?

I think so. I have just received the language of the deal in an e-mail, and it’s great that the Senate has now passed it. I think that we’ll have a chance to vote on it in the House later tonight. And by “it,” I mean something that will extend the debt ceiling until sometime in February, and keep the continuing resolution out there to keep the government operating until some time in January. So those two big crises are put off. There are a couple of conditions that are in the legislation. One of these is that there has to be a House-Senate budget conference, and that’s certainly something that most of us have been asking and voting for repeatedly over some months. That’s fine. And then they want to put on some minor condition to make sure that people don’t get government help with their healthcare premiums outside of the income limits, and that’s okay. (I think that it’s probably unnecessary, and might scare some people away who deserve help with their healthcare.) But, in any case, it’s good that we’re going to raise the debt ceiling and open the government again.

But it’s a shame that we’ve wasted weeks and weeks of time and scarred the world financial community, and all for no good reason. It’s not as though this were a substantive debate between two parties with equally justifiable positions. No, this was a hostage-taking situation where the hostage takers didn’t even know why they were holding the government hostage. For a while, it was because of the healthcare act. Then, it was social insurance. And for a while, it was demanding budget talks and austerity cuts. Some damage has been done during the period, and not just lost opportunities – certainly that, things that government should’ve been doing to help people over the last two weeks – but also some real economic downturn as a result of the scare tactics.

The Politic: It’s pretty depressing from the outside, so I can’t even imagine what’s it like to witness it from the inside. And the problems which caused the shutdown seem like they could be solved with methods of scientific thinking, which you discussed with the The Politic last May. Would you reiterate your advice, in light of the shutdown?

I think that the activity that has taken place – and I don’t want to dignify it with the term “debate,” because debate suggests that there are two equal sides that put their ideas up against each other – was just a mission of self-destruction where one side commandeered the train and drove it toward the cliff. And it would help, as in so many things, if people based their discussions and actions on evidence. Policy should be based on evidence. Fiscal policy and economics can be based on evidence – it’s true that it’s hard to do controlled, well-fashioned experiments in economics, but it can be an empirical discipline where you actually look at evidence and see whether your findings support your theories, and then you can modify your theories accordingly and subject your findings to evidentiary tests. This kind of process would really help in this situation.

For example, take the idea that Obamacare is really costly to society. You actually could conduct some measurements and see whether it really is costly. And so far, the parts of the healthcare act that have been implemented aren’t particularly costly to society, and actually seem to be economically beneficial – bringing tens of thousands of people into full healthcare coverage, instead of locking them out of the system. That has the prospect of being economically beneficial. So let’s wait and see, instead of having a temper tantrum and saying, “We’re sure this won’t work.” I think that if people were more closely tied to evidence, they’d have been (1) more reasonable in places where there is evidence, and (2) more patient in areas where the evidence has yet to be collected.

In addition, as I’ve said with previous interviews with The Politic, thinking like a scientist doesn’t mean that everyone has to be a scientist; it means asking questions that can be answered empirically and verifiably, which is something that everyone can do. It means making inquiries where your answers can be tested against the evidence, and where your answers can be subject to refutation by other people, rather than just insisting that you’re right, or insisting to yourself that you’re right, which is, of course, the most dangerous thing to do. And we wouldn’t be in this position now – where they shut down the government for no constituent reason – if people adopted this method of inquiry and debate. One of the justifications for shutting down the government (the reason was different at different times) was that healthcare reform wasn’t working. Well, let’s look at the evidence before you shut down the government.

And as for the idea that we have to cut spending and we can’t have revenue, that austerity is economically beneficial, well, again, let’s look at evidence: austerity has been tried in Europe, as recently as in the past year or two. And the reasonably strong – though not irrefutable – evidence says that austerity doesn’t work, and that making people suffer doesn’t make an economy stronger. That seems to be true in this case, too.

The Politic: This mindset, of testing whether something will work with empirical evidence, could be a good one to adopt so that we can move past short-term crises and start looking at long-term issues.

Well, that’s another point… this last month, which was taken up by one side throwing temper tantrums and threatening to close the government, and then closing the government, then threatening to default on our obligations, that have been incurred, in many cases, by them, could’ve been spent on solving both immediate, looming problems and long-term ones, whether systemic or imposed.

For that reason, an issue like climate change, which is slow-acting but of enormous importance, is something that legislators have trouble thinking about and dealing with. It just doesn’t fit the time scales that are usually debated in Congress. Instead of dealing with anticipated problems with the healthcare act that haven’t happened yet, we maybe could be dealing with very real, long-term problems, having to deal with healthcare, and having to deal with other things.

The Politic: It seems like climate change is probably the issue that will be impacted most by that mindset.

It’s certainly a particularly good current example of how we can do a better job in debating policy if we gained long-term perspective.

The Politic: Hypothetically – and unfortunately, this is only a hypothetical at this point – if climate change began to be debated in Congress, what, in your opinion, would be the ideal course of action to address the issue?

Well, there seem to be several causes of climate change. They are heat trapping by greenhouse gases, and changes in air and ocean currents that result from heat differentials. There’s a lot yet to be studied about exactly how this works, and there’s a lot to be done about public education about the existing effects, and the likely effects of short-term, medium-term, and long-term. But what we should be doing is moving ahead on controlling the identified cause, and it’s highly probable that the greenhouse gases, emitted by humans, are the source of the problems. So humans should immediately start to control those greenhouse gases.

We’ve shown that we can control these or another emissions, such as when we became concerned about chlorofluorocarbons affecting the ozone in the atmosphere and were able to control that. Controlling carbon dioxide emissions is harder because the emissions are so widespread, but we can do it, not just in principle but also through practice, so that’s where we should turn right away.

How do we control them? Well, there are different ways: cap and trade was something that Congress tried a while ago, but the Senate didn’t pick up on it. A carbon tax is a more direct and, I would think, a more efficient way of doing it, because you’ll have to pay for harmful emissions, and pretty soon they’ll emit less greenhouse gas into the atmosphere. And obviously, we need to study the economic effects of doing that. So what will that do to poor people? Well, it will probably mean that their commuting costs will be greater, so we’ll need to find some way to subsidize that, so that they’ll be able to get to work affordably. It would probably mean that home-heating and industrial processes using carbon fuels will be more expensive, so we’ll have to find more efficient ways to heat homes and to run our industries, either more efficiently with carbon, or getting away from carbon-based fuels entirely. We can do that, and policy-makers can help that along – again, a carbon tax is one way of helping that along, but there are other ways, and I think we should get on that.

The Politic: What are the political challenges for Congress to overcome to take such action?

You know, I don’t think we need to change the system. I don’t think the problem is the existence of the filibuster or the rules that the House of Representatives votes onto itself, or the separation of powers, or the checks and balances. Those have been shown to work pretty well over the last two centuries. There have always been some problems, but overall, they’ve worked pretty well.

I think that what’s missing is the goodwill that you need for the government to function. And there’s no change in the organization, in the regulations, in the parliamentary procedure that I see that would generate the goodwill that’s necessary to ensure the reverence for self-governance that this country has always had. We need to recapture [this] so that people will actually believe that each person has the responsibility to make the self-governing system work. There wouldn’t be such threats to shut down government if the Tea Party had the reverence for self-governance that they say they have.

Charlotte Finegold is a staff writer for The Politic from Highland Park, New Jersey. Contact her at charlotte.finegold@yale.edu. View more posts