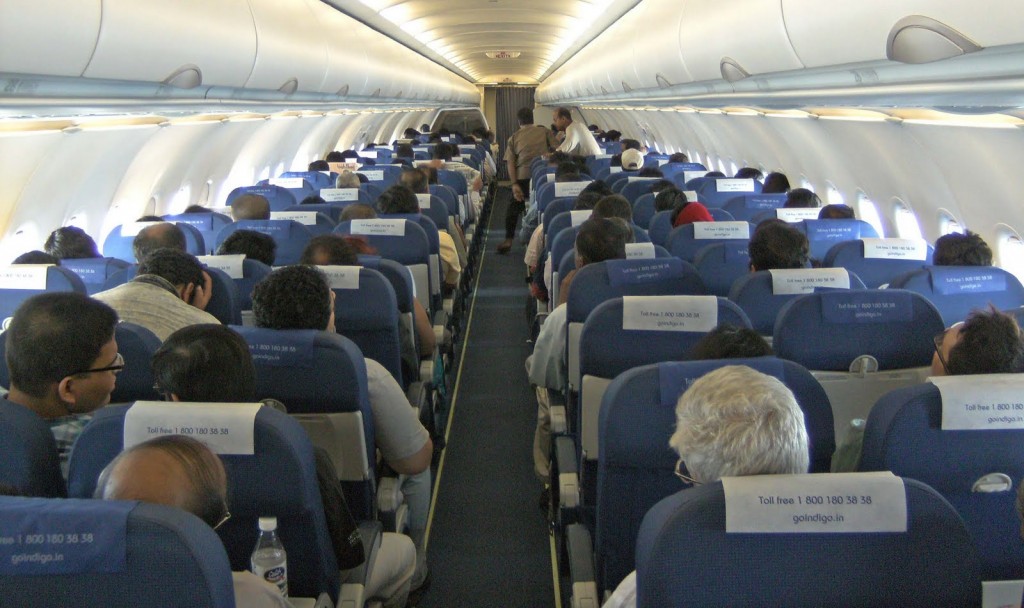 You begin to truly feel a sense of return as you queue up at your boarding gate. Lines, many and amorphous, have emerged well before the boarding time. Eventually, after the business class and the handicapped and the with-children folks have boarded, the economy class is addressed. “Passengers in seats 35-40 may now board.” In seconds, the queues are all swimming into each other. It takes you a moment, as all except those in 35-40 envelop the gate, to realize that it isn’t just your rugged physicality that is drawing so many people all over you.

You finally board the plane; you arrive at your aisle seat. As you look up to store your belongings, you find that the overhead bin is in danger: trembling under the weight of entire suitcases. So you traipse about, eventually securing space for your backpack and jacket in some other bin. You return to your seat and quietly open your book. After spending ten minutes on the same page, it strikes you that it isn’t the book that is the problem; the plane is booming with cacophony. A grand imperial game — who-will-grab-the-empty-seats — is underway. Machinations have been made, intrigues designed. As in all grand contests of wills, accidents are unavoidable. And so the blameless passenger trying to read his book must witness the collision of bodies… Oh sorry… tumbling of milk-bottles… Hai, dekho jaldi… inter-cabin whispering of instructions from mother to son… Checked all rows properly? Of course, the mother wanted to be sure. When everyone on the plane is in search of the elusive vacant row and the rare untaken exit seat, one has to check all rows, that too properly.

A second game is in procession. Another college student, in the row ahead of me, is made to jostle by a matronly lady. Can you please… if you don’t mind… seat 22c? My family, actually…. The kid nods, surrendering. With all such individual surrenders and all the compromises combined, soon a confused marathon is underway; passengers are shuffling from front to back, left to right. Men want to shift two window-seats closer to their elderly parents; mothers want to move a row nearer their daughters; fathers want to unite with their families. Soon, tension erupts. But there is noooo difference between this window seat and that middle seat; please you understand. Shake of a head. Airhostesses are summoned; deal making and brokering come to a halt. “Sir, what is your original seat? Please go back until the plane takes off.” What a cruel injunction. The guy’s original seat is hardly of any consequence now, when he’s made two or three switches with his fellow passenger-barterers. Eventually, an hour or so after its scheduled time, the plane takes off.

The journey is uneventful. You are only a little alarmed the two times you visit the restroom, finding napkins and soap and other… liquids splashed across the room.

You are landing. Just as you are re-orienting yourself to a world ten time zones away and just as the plane is touching Indian soil, clapping and hooting break out. A few seconds later as the flight pauses on the tarmac, one passenger stands up and begins to take out his luggage. Fifty others follow. Ooohff. The plane is taxiing again. “Ladies and gentlemen, please remain seated until the fasten seat belt sign is switched off.” But the people are already up; bags have been removed. Eventually the plane reaches its parking-slot and stops. The fasten seat belt sign is still on. Several people from rows well behind you wriggle ahead, navigating a path through others, through the bags. You’re home.

Two days later, the second time you’re driving your dad’s car, you realize you’re on third gear but have entirely forgotten to wear your seat belt. At this point, you know you are home.

For many of us in the U.S. — college students, young adults, entire families — the December trip back to India is an annual pilgrimage. But why, as we approach home, even as we congregate at our boarding gates in Los Angeles or Washington or New York, do we suddenly abandon the rules and customs we have begun to value? I, without doubt, am as much part of and as implicated in this phenomenon of neglect as all the others who were in my plane and in other such planes.

We are mindful of proprieties when in the U.S. We don’t like to embarrass ourselves, our nation, before others. We are even a little scared of them and so unquestioningly do the right thing. In that spirit, I have always buckled up when driving in the U.S. Most Indians traveling on a domestic flight in the U.S. do not, I imagine, stand up and scramble for their stored bags even as the plane is taxiing. At one point in my Air India JFK-Delhi flight, I noticed the guy two seats from me exploring his nostrils with his index finger. I’m certain he isn’t quite so adventurous in the Connecticut metro he takes every morning to his New York office.

So why this inconsistency in our behavior: between when we are with others and when we are leaving it for and are in India? Let me suggest three possible explanations.

One, our improprieties have few if any repercussions when we are around fellow Indians. If you stand up while the plane is taxiing in a domestic American flight, the airhostess is going to command you to sit down; if you don’t listen, she will later hand you over to law-enforcement authorities. No such thing is going to happen to you on a flight to or within India.

Two, I think when amidst our own, our behavior is motivated by a sense of resignation and expeditiousness. As much as many of us, individually, would like to patiently stand in a line, our professionalism seems to hold little value when everyone else is squirming ahead. So we, too, jostle on.

Three, I think we lose our sense of embarrassment when with fellow Indians. We tell ourselves that we are all equally slimy and feckless. And so we jettison our sense of professionalism. Things in America are different. But amongst our own people, everything goes; no one cares.

So what can we and what should we do about this phenomenon? Let me note that there is nothing necessarily always wrong with our rather unfettered behavior amongst our own people. Watching your compatriots make all the effort they make just to move two rows nearer their family is touching; all the hassle is ultimately grounded in love. Such emotionalism stands in contrast with the typically stiff western professionalism.

Yet, I would maintain that we cross the line between the endearing and the slovenly all too often. For instance, I know very well that the failure to buckle up can be fatal. Even so, I, and hundreds of others who go to the U.S. and then come back to India, consistently neglect to wear our seat belts.

We care about India; we seek to alter the status quo of frequent under-professionalism. Then why, at the very least, do we not do anything through our own actions? Back in New York, we are happy advocating for and wiring money to particular political parties back home. But why export all the problem-solving to them? Why muffle our own voices and actions?

None of this is to suggest that all bad things are native to India and all good ones to the U.S. It is simply to say that many objectively good practices — such as wearing a seat belt — are more prevalent in the U.S. than in India. And those of us who do spend considerable time in the U.S., and embrace these practices there, should not hesitate from applying them when back in India; they don’t become inapplicable once we’re back home! We have a distinct voice, shaped by our significant international experience. Drowning this voice amidst the clamor of India’s and Indians’ status quo is of little service to ourselves, to Indians, or to India.

More broadly, outside of just India and Indians, many of those who study and live in the U.S. still very much think and care about their places of origin outside the U.S. When they go back to these places — India or China, Egypt or Chile — abandoning the objectively good practices they become used to in the U.S. is of little good to anyone.

I, for one, will buckle up, and I don’t care if no one around me does so. Hopefully when I return to India on another New York-Delhi flight ten years from now, and get behind the wheel, a few others will be wearing their seat belts too. Then, I think I will feel more, not less, of a sense of return.

Abhimanyu Chandra is a staff writer for The Politic from Laurel, Mississippi. Contact him at abhimanyu.chandra@yale.edu. View more posts