Pollution, violence, corruption, Zika. Those are just a few buzzwords that have popped up in association with Rio and the 2016 Olympic Games. However, this negative outlook only gives a small snippet into the marvelous city of Rio de Janeiro. Media outlets worldwide have commonly spun an unflattering portrayal of Rio–one that fails to capture the natural beauty, cultural richness, and endearing people of A Cidade Maravilhosa.

After about twenty hours of door-to-door travel, I arrived at my hotel in the Copacabana region of the city’s southern zone. Before I could even think of settling in, there was only one thing on my mind: açaí. New York City’s illegitimate international food scene has managed to adopt acai into a mediocre, relatively tasteless bowl of instagrammable fruit, more useful for social media than your stomach. However, as I left for the corner cafe only a block away (as if one would ever have to travel more than a block in Rio for this treasure) I could see mirages of rich, sweet, purple deliciousness topped with fresh banana. After devouring my fairly priced treat, the rest of my first day consisted of much needed rest and relaxation. 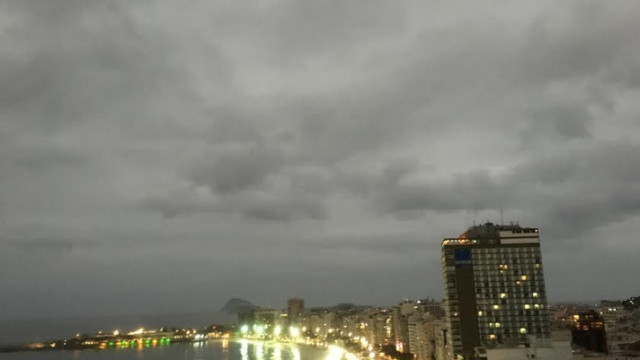 My next day, after a full nine hours of work (as a news runner/intern for NBC News), I figured it was time to practice my Portuguese. Apart from the mouthwatering fruit and gorgeous views, the people of Rio de Janeiro are affable and easygoing to say the least. I sparked up a conversation with a porteiro (doorman) about my preferred Brazilian soccer team–Fluminense–which happened to be his as well. I commented on the lack of Fluminense players on the Brazilian olympic team, yet he responded with hope for A Seleção inn the midst of a dismal few years for Brazilian soccer. Unfortunately, their Thursday draw with South Africa won’t help their chances. After a bit more “futebol” chatter, I bade him good bye, eager to get ready for dinner with my host family from last year’s Rio study abroad experience.

They treated me to a delicious meal alongside a view of the local horse track. We discussed eight-year-old Eduardo’s upcoming Judo match as well as the quest for moderacy in Brazilian politics. I’ll definitely be seeing them again.

Soon thereafter (well, several hours and a satisfying night of sleep later) I found myself observing a beautiful Rio morning atop one of the highest points in the city: Pão de Açucar–Sugar Loaf–with a few coworkers. While Maine’s Sugar Loaf ski resort is fun and all, this view has it beat. It was back to work after a few views, selfies, and help interpreting. My body was in the office but my mind on a sunny Sunday off on Ipanema beach. 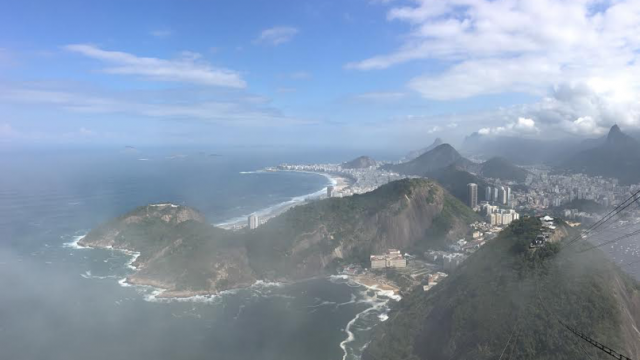 I turned in early Saturday, and joined a co-intern on a late morning walk (with açai in hand) to Ipanema. A day of sand and sun was ultimately made successful with one small piece of advice: não coma a camarao–don’t eat the shrimp. While the tempting skewered snack sold by beach vendors certainly caught our eye, the acai held us off for long enough. 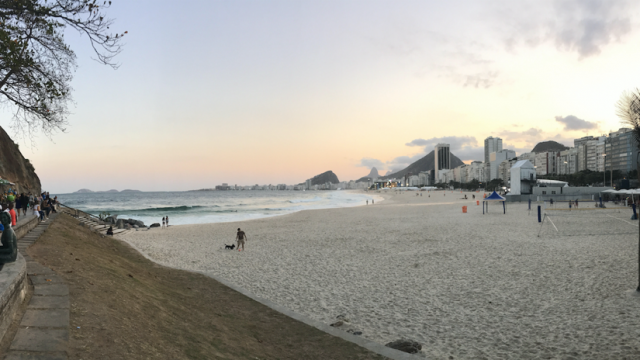 A long day at the beach made way for a full workweek–one that is soon coming to a close. However, after the opening ceremonies, it seems as if weeks will mesh into weekends, maybe even nights into days. I’ll let you know how I’m doing in a bit.