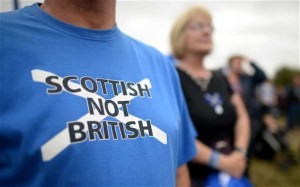 In seven months, Scots will go to the polls and answer a question that is centuries in the making: “Should Scotland be an independent country?” As the clock ticks, various controversies and arguments have arisen. Outside Scotland, it seems as though there is little support for succession. The time of threats is come.

The British Chancellor of the Exchequer, George Osborne, the equivalent of a minister of finance in other countries, sounded a tone of warning. “If Scotland walks away from the U.K. is walks away from the U.K. pound,” he said. Loosing the common currency would be a huge complication for independent Scots. Today England, Scotland and the rest of the U.K. benefit economically from a shared currency and a freer trade. Also, Gordon Brown, former British Prime Minister and a Scot, warned the Scottish people that if they become independent they will lose their state pensions.

Then José Manuel Barroso said that the chances that Scotland would be part of the European Union are very small, perhaps non-existent. He pointed out that for Scotland to be granted membership, the member countries would first have to vote on that decision and come to a unanimous acceptance of Scotland as a part of the EU. Some countries, and not only the U.K., would probably not back Scotland. Spain, fearing that a Scottish membership in the EU would only light up a spark and strengthen its own separatists, would surely vote against Scottish membership. It should be noted, however, that the exclusion of Scotland from the EU would lead to huge logistical, legal, and social problems. It would be the first time that a country would be “leaving” the European Union and the social and legal links between the Scots and the rest of the countries have been tight throughout all these years.

Some believe that these threats are nothing but bluffs and will not become reality. Angus Roxburgh, a writer and broadcaster for the Guardian, wrote two days ago: “Suddenly I feel we are the most loathed nation on earth. […] Let’s quit the scaremongering, and accept one thing: if the Scots democratically choose independence, then Brussels, London, and all global institutions will accept this and work to make it happen. Not for Scotland’s sake, but for their own. No one is going to throw us out.”

Interestingly enough, we cannot even be sure that Scots want to leave the U.K. Recent polls suggest that the Scottish population would prefer a greater devolution than total independence. According to Reuters, 55 percent of Scots are worried for the future of their nation if they become independent and 28 percent if they obtain devolution. “Dev max” would result in the Scottish Parliament, called Holyrood, having more power over Scottish affairs. Yesterday British ministers decided that the Scottish government will have the power to issue investment bonds, which will bring substantial financial benefits to the nation. Conservatives, Labour, and Liberal Democrats, three major British parties, are in support of Scotland remaining a part of the U.K. and promised to give more power to Scotland if it is not independent. As we can see, with threats come promises.

Not completely sure of itself, Scotland is planning on turning its back on the U.K., an act that would disrupt the islands, the European Union, and other supranational dynamics. Depending on how the Scots respond to the referendum on the 18th of September, Scotland might leave its family estate and walk bravely into the unknown, hoping that the costs of its rebellious self-confidence will not outgrow the benefits of its independence.