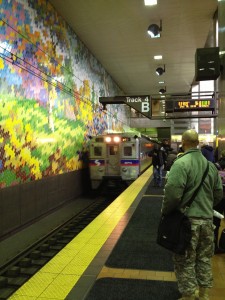 The US Senators and Representatives of the northeast are beginning to fight back in defense of mass transit.

At the end of last month, a tax credit expired that helped commuters who ride public transit to work afford their travel expenses. Now, in 2014, commuters who drive on their own can set aside $250 per month from their salary in a tax-free flexible spending account to cover parking costs associated with commuting. But for those who ride public transit, the amount that can be set aside has been slashed to $130 a month from last year’s $245. In essence, the federal government has incentivized driving to work over taking public transit.

For commuters who rely on trains and buses to get to work, this means over a thousand dollars less per year that they can put toward commuting costs.

“We should be making it easier for people to get to work not harder, particularly during these still-challenging economic times,” said Senator Cory Booker (D-NJ) in a statement to the Politic. “This tax credit is vital for many people in the northeastern region who rely on it to commute to work. Commuters should be incentivized to use mass transit not just because it is cost effective, but because it is the environmentally responsible thing to do. The expiration of this tax credit would disincentivize commuters from taking mass transit and is likely to increase congestion on already overcrowded roads.”

Senator Chris Murphy (D-CT) also came out swinging on behalf of the tax credit. In a statement to the Politic, he called the failure to extend the benefit “a terrible product of Congress’ continued dysfunction.”

“Since we increased the transit benefit to equal the parking benefit in 2009, it’s been an annual struggle to keep it from expiring as each year comes to a close,” he said. “That shouldn’t happen, and I look forward to voting for its renewal.”

In June, 2013 Senator Schumer (D-NY) introduced S.1116, The Consumer Benefits Equity Act of 2013, to permanently equalize the parking benefits with the public transit benefits. Aside from being introduced and referred to the Finance Committee, no action has been taken on the bill. Of its ten co-sponsors, only one (Senator Brian Schatz, D-HI) represents a state outside Amtrak’s northeast corridor. All of the co-sponsors are Democrats.

While Connecticut’s Senator Richard Blumenthal has signed on as a co-sponsor, Senator Murphy has not.

One of the bill’s co-sponsors, Senator Chris Coons (D-DE) released a statement to the Politic saying he will “continue to support and encourage the expanded use of public transit.” Along with co-sponsoring S.1116, Senator Coons sent a letter in December to the leaders of the Senate Finance Committee calling on them to extend clean energy tax incentives, including the public transit benefit.

But not all of the Senators in the northeast are clamoring to help public transit. In early December, the General Manager of the Southeastern Pennsylvania Transit Authority, or SEPTA, sent a letter to Senator Bob Casey (D-PA) asking for congressional action to extend the tax benefit. Senator Casey has not co-sponsored the extension bill.

Not all of Pennsylvania’s congressional delegation is standing by so quietly. On December 4, 2013, a delegation of six members of the House of Representatives from the Greater Philadelphia area, both Democrats and Republicans, sent a letter to Speaker John Boehner (R-OH) and Minority Leader Nancy Pelosi (D-CA).

The letter said, in part: “A reduction in benefits will impact more than just family budgets. Employers will see their payroll and unemployment tax liabilities increase. Reducing benefits for public transportation will also encourage greater automobile use, resulting in congestion on our roads, increased air pollution, greater reliance on foreign oil, and even more strain on transit agency budgets.”

A bill similar to the Senate measure is languishing in the House. H.R. 2288 was introduced by Representative Michael Grimm (R-NY) back in June 2013. The bill has 66 co-sponsors. The co-sponsors of the House measure are a much more bipartisan and geographically diverse cohort. Representatives from Alaska to Oregon to Arizona have come out in favor of the bill.

Why no action has been taken remains a mystery.