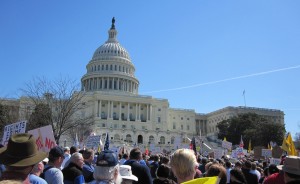 Despite Republican claims that the Affordable Heath Care Act, otherwise known as Obamacare, will end America as we know it, recent data shows that even before full implementation of the law kicks in, the number of Americans lacking health care dropped between 2011 and 2012.  Six-hundred thousand more Americans gained insurance, and this number has risen for the second year in a row.

Republicans are throwing Hail Marys as the implementation dates approach in October and January. This has preoccupied them for the last three years: since the 2010 passage of the law, House Republicans have voted to repeal this law 42 times. This month, however, this repeatedly symbolic yet futile effort has taken a more radical turn.

House Republicans, pressured by the extreme right and Tea Party activists, have decided to hold the government hostage if the Congress doesn’t agree to defund the ACA by September 30th.  They are ignoring the nation’s business – cutting the deficit, creating jobs—in a full-throttle attempt to block the law.  The fact that the policies underlying the act originally stemmed from conservative think-tanks magnify the irony of the situation, as, on Wednesday, the full Republican caucus vowed to shut down the government if the health care law isn’t repealed.

Americans have watched repeatedly as Republicans and Democrats have struggled over debt ceilings, budget cuts, fiscal, cliffs, and government shut downs. But the tone this week has turned more apocalyptic, and the inevitable posturing, stand-offs, and eleventh-hour dealings should obliterate any remaining percentage points of approval for the 113th Congress.