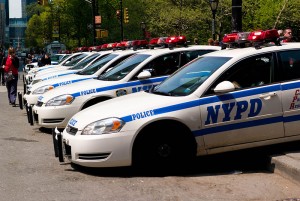 New York City Police Department Commissioner Ray Kelly probably isn’t used to being challenged by anyone – at least not face to face.

But when he visited Brown University this past Tuesday, Kelly was not just challenged, but practically swept away in a wave of anger by students protesting the controversial Stop and Frisk policy, implemented under the auspices of Kelly and Mayor Michael Bloomberg.

Kelly was invited to Brown to give a lecture titled Proactive Policing in America’s Biggest City. Protestors filled the hall with jeers, preventing him from speaking. In a video posted on YouTube, Kelly silently stands at the podium as university administrators plead for calm. In a conciliatory tone, an administrator says, “We’re asking that you let him speak.” To that, a voice replies, “We’re asking that you stop stopping and frisking people.” The audience cheers. Kelly’s scheduled lecture is then derailed beyond the point of no return. The national media has picked up on the story, with reports of Kelly being “booed off the stage” in publications as diverse as The Atlantic, Los Angeles Times, and Wall Street Journal.

The explanation of why these students were so incensed is pretty simple. Stop and Frisk has been a reality of New York policing for the past decade. In 2011 alone, over 680,000 New Yorkers were deemed suspicious enough to be stopped and searched by the NYPD. 92% were male and 87% were African-American or Latino.

Stop and think about those demographics for a second. In a city as diverse as New York, the vast majority of people who looked like they could possibly be suspected of wrongdoing come from historically marginalized groups. 25.5% of New Yorkers are African-American and 28.6% are Latino. 47.5% of them are men. What does your life become when knowing that the way you look makes you a constant target of police suspicion? When you can be stopped and searched at nothing more than the whim of one police officer?

That brings us back to Commissioner Kelly and his ill-fated lecture. The protestors got what they wanted – Kelly was disrupted and the national media is all over it. But given the long tradition of free speech as the core of the university, should we be applauding the tactics taken by the Brown protestors? Silencing Ray Kelly on the stage of an Ivy League university does not get us any closer to eliminating the prejudices of Stop and Frisk. Silencing Ray Kelly will not lend a voice to the people who have had to live under Stop and Frisk. Silencing Ray Kelly puts mostly just gives more attention to Ray Kelly.

The most viable way of modifying Stop and Frisk comes when those who live under it take a stand. In August, a federal judge ruled the policy unconstitutional after people who felt unfairly targeted brought it to court under a class-action lawsuit. That is progress. These are the type of efforts that deserve our energy.