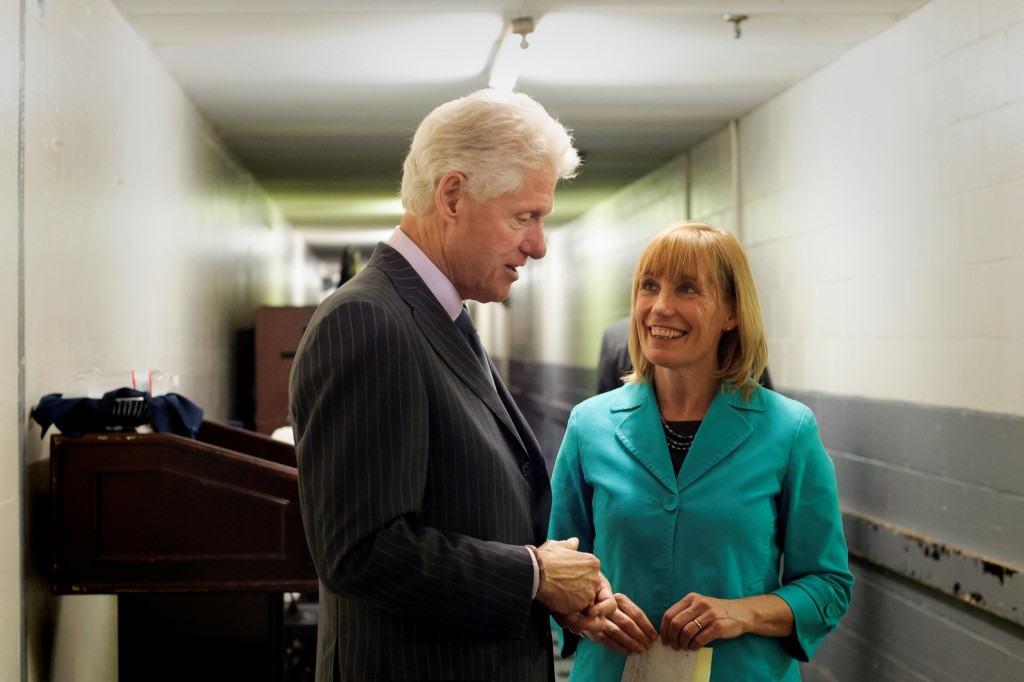 Maggie Hassan is the current governor-elect of New Hampshire. She will be the nation’s only Democratic female governor when she takes office on Jan. 2, 2013. Before running in the 2012 gubernatorial elections, she was the majority leader in the New Hampshire Senate from 2008 to 2010. From 2005 to 2010, she represented the 23rd district of New Hampshire.

The Politic: Governor-elect, the entire New Hampshire national delegation is female — the first time this has happened in any state in this nation’s history. Why do you think this happened?

The reason that the all-female delegation result of New Hampshire’s long history and culture of citizen participation at all levels of community and government. There are lots and lots of opportunities for women to participate. We have a long tradition of volunteerism where everyone is welcome to participate, as long as you’re willing to work hard and be a part of a team. That’s given lots of opportunities for women.

The Politic: How do you feel being part of such history?

It feels really wonderful and exciting. It also reminds me and makes me hopeful for a time when it will not be remarkable at all that a state has an all-female delegation.

The Politic: In five of the last six presidential elections, New Hampshire — traditionally a swing state — has voted for the Democratic presidential candidate. Why is that so?

We have a swing state of problem solvers. We have a large population of independents, Republicans, and Democrats who really want the country to move forward. There are many people who are also progressive. The national Democratic candidates have usually been a good match because they’ve generally wanted to solve problems and move the country forward — and that’s the attitude the voters want when they go to the ballot box.

The Politic: Before the 2010 mid-term elections, the New Hampshire House of Representatives had 216 Democrats and 174 Republicans. After the midterms, the breakdown shifted to 298 Republicans and 102 Democrats. The 2012 election will result in at least a 115-seat swing to the Democrats, returning them to control of the chamber. What do you think these dramatic swings say about New Hampshire and the state of national politics?

2010 was a unique set of circumstances, both nationally and at the state level. Voters were very, very frustrated with the pace of economic recovery. The 2010 election cycle was one in which voters a new team of lawmakers; these lawmakers had run for jobs at the economy but ended up promoting a much more radical agenda than voters thought they were voting for.

What we saw during this past November in New Hampshire was a return to a much more balanced body politic in the state. We now have a majority of Democrats in the New Hampshire House again — a relatively slender ma- jority — and we see a slender Republican majority in the Senate, and we see a Democrat continue in the governor’s people of this state want their government to be balanced, constructive, and for their representatives to come together to compromise and move forward.

The Politic: You’ve spent a lot of time during your political career in the state Senate. What lessons did you learn there that you will keep in mind as governor?

That every elected official was sent here to do the people’s work. If they are willing to build relationships and listen to each other, then they can find solutions and move forward.

The Politic: Like virtually every candidate who has run in New Hampshire, you pledged not to impose income or sales taxes during your term. Why did you take that pledge? Do you think it may unnecessarily confine you in terms of ways to raise revenue?

I pledged not to impose a sales or income Hampshire that is built around not having income or sales tax. We have an economy that has done better than most, nationally; we’ve had one of the lowest unemployment rates in the country and also done things like cut our school dropout rate in half, expanded universal kindergarten statewide, and more. It’s important to keep what works and focus on solving our problems without an income or sales tax — we’ve done that in the past, and we’ll continue to do that.

The Politic: Your husband, Tom Has- san, is the principal of Phillips Exeter Academy, one of the most prestigious high schools in the nation. What have you learned from him that will help you deal with the education reform in New Hampshire?

I am really proud of the work Tom does as an educator, and I am really proud of the institution he leads, which continues to attract people from around the world. First and foremost, I learned from Tom that every student and every family matters, and that we need to move forward to make sure that every student in New Hampshire has access to quality education and can afford college. I’ve developed an innovation plan that really focuses on how we can strengthen our public universities and college system. In the last legislative session, the Tea Party legislature voted to cut university tuition reduction by 50 percent. I will find wats to restore that funding. I will also focus on improving our K-12 standard public education system, especially in the areas of science, technology, engineering, and math — because one of my goals for New Hampshire as part of the innovation plan is to have the best workforce in the country, and to do that, we will have to improve public education, particularly in those areas.

The Politic: In your victory speech on election night, you mentioned “jobs” and “businesses” multiple times. What is the economic outlook for New Hampshire, and how do you intend to improve it?

The economic outlook for New Hampshire is good. We have challenges like any other state, but we are generally one of the best in terms of unemployment rate and or tax burden. Moving forward, my innovation plan will make make sure we have tax credits for research and development, tax credits for businesses to get to the next level. We also want to make sure we have technical assistance available for businesses, especially in the form of strategic partnerships.We also need to make sure that we have strong infrastructure and bring our health care costs down.

The Politic: Speaking about health care, how has New Hampshire readied itself for implementation of Obamacare?

We have been challenged in the last two years because the legislature and the executive council, dominated by far-right lawmakers, passed a law that didn’t allow us to set up our own exchange. We are evaluating what our options are in in partnership with the federal government, or any other opportunities to set of course, federal law says that we will is not my top choice because I’d rather New Hampshire design and control its own exchange.

The Politic: As you have seen with Hurricane Sandy, climate change is a huge issue. We often think of clean energy and battling climate change as a federal issue, but do you think states themselves could do more? What could New Hampshire, for example, do to help?

One of the things I supported in the state Senate and continue to support program called the RGGI, or the Regional Greenhouse Gas Initiative. New Hampshire joined that Northeast initiative, and I want to make sure we continue to strengthen that program. I also want to make sure we have the right incentives in place to extract alternative and homegrown energy to New Hampshire. We also need to be prepared, on an emergency basis, for any kind of extreme storm we may experience. That’s something we need to be as prepared for as we can.

Geng Ngarmboonanant is a sophomore in Silliman College.