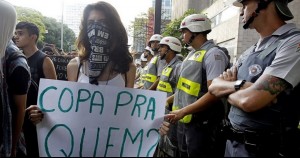 Or so they say.

When I was seventeen years old, I taught English after school for my district’s public school arts center. One day, one of my most assiduous students didn’t show up to class. In a very matter-of-fact tone (I swear she could’ve been discussing the weather), the center’s director informed me that he had been murdered after class the previous day. When I started punching the wall in rage and sobbing in the middle of her office, she told me to calm down because if I wanted to keep volunteering there, I would have to understand that this was a pretty common occurrence: “don’t attach yourself to the students, we can’t do much for them.”

Our government seems to have no money to spend reforming the public education system and the jobs market to guarantee that students stay in school with a job prospect in the future. In public schools, students work side jobs as avião (literally “airplane”)—drug delivery boys—rather than study. It is common to have fouth to eighth grade grouped together in the same classroom because there are not enough teachers for the district. The tale of the bright-eyed young child who manages to rise in a public school in god-forsaken lands and find education in a hopeless place is, simply put, a tale. There is no “Brazilian Dream.” Having no choice but a public education is a condemnation to virtually no education at all. The Brazilian government does not offer much money to improve what is the hallmark of society: equal access to good education for all. But the billions spent on soccer stadiums that won’t ever be used after the World Cup (Manaus and Brasilia, two World Cup host cities, don’t even have local soccer teams) are not a problem. Many of the protesters at schools held signs that said “Dilma, me chama de Copa e investe em mim:” “Dilma [our president], call me World Cup and invest in me.”

Brazil’s education system is not the only public entity that is deeply flawed. Our public transportation system does not run on time, with comfort, or with security. Just last week my mom called me to tell me that someone pulled out a gun next to her and demanded that every passenger forfeit their belongings. But neither one of us was particularly surprised. Salvador, my city, has one of the highest global averages for crimes committed on buses every day. Every single day. With millions of Brazilians depending on the public transportation system for dear life because they have no other option, one would think our government would give some thought to improving it. Instead, violence increases, the buses get older and rattier, but the price continues to hike. And last year, when yet another hike occurred with absolutely no improvement to be seen, the protests started kicking in. But as we chanted during the protest, it wasn’t nor is about the 0.20 centavos. It’s about a government that allows violence to occur unchecked, allows the population to be exploited, and does not try to stop extorting yet more money from honest workers taking the bus every day. Spending billions on a World Cup stadium, though—why not?

Brazil’s health system, too, is notorious, as hundreds, thousands, millions of Brazilians are stuck waiting in line because there simply aren’t enough doctors. Hundreds of thousands die during the wait. In less than three weeks, two hundred would-be patients in Rio de Janeiro ran out of time. The rate of hospital deaths, clinic acquired-illnesses for lack of hygiene and inspection, and delays in surgery procedures are appalling. Health insurance, however, is an expensive commodity—one that very few people are able to afford. The government offers no security when it comes to health.

While spending 1.6 billion reais (roughly $700 million) on the Mané Garrincha stadium in Brasilia is outrageous, people seem to misunderstand that the World Cup is merely a drop in the ocean when it comes to the atrocities that politicians have committed against our country. First of all, those billions were not the actual cost of the stadiums. The initial prediction for the Mané Garrincha stadium was less than half than what it cost, and in Brazil construction and public operations is precisely where politicians make money. Let’s say a stadium actually cost R$ 300 million to build; a backhanded deal will write the official figure as R$ 600 million, and then the extra R$ 300 million—all from public spending—is divided between politicians and construction company owners. Our taxes, instead of improving hospitals, creating better schools, paying teacher fairer wages, or increasing police patrolling, quite literally go to fund someone’s private jet. This happens every time there is public spending. The World Cup was just the last straw we could handle.

Just like the protests last June were never about the 0.20 centavos price hike in public transit fares, this has never been about the World Cup. Rather, it is about the absurd corruption that runs rampant in our country. I am exhausted and embittered about Brazilian politics and its lack of accountability. Presidential elections are coming up in October and everyone, frankly, sucks. The 2010 elections in Sao Paulo saw a clown named Tiririca elected to the National Congress with over 1.3 million votes. I don’t mean clown as a euphemism for a silly person: he is a literal clown. It is hard to take politics seriously anymore. A “real” politician, senator Renan Calheiros, used an official military airplane to go to a party in Porto Seguro. When he was caught, he apologized for breaking the law. Then, a short while later, he booked the military plane again to take him to Rio de Janeiro for a hair implant appointment.

As a Brazilian, I sometimes feel like I’m wearing a sign smacked onto my face that says “I am really, really stupid.” How else do these politicians feel entitled to act like the population does not have brains?

This brings us to the 2013 manifestations. Once I heard that the stadiums were costing upwards of billions of dollars, all while the entire public system, which we pay exorbitant taxes towards, remained broken because of “lack of funds,” I and thousands of other Brazilians got angry. So we went to the streets.

On June 20, 2013, I dodged rubber bullets. Thankfully, they were rubber—painful and potentially lethal, but less dangerous. Other Brazilians were not so “lucky.” While I ran five kilometers uphill away from the bullets and tear gas—my eyes burning red, my arms sore from an officer who tried to grab me—I replayed all the crimes I had committed in my life. I think I bit a classmate when I was five; I snuck into a club in Salvador when I was 17; I’ve cut my fair share of lunch lines; and I’ve lied to my mom a couple of times about eating veggies before dessert. Oh, and I sang songs about peace and the Brazilian anthem while I walked around my city in a large group, carrying a sign that said, “It’s not about the 0.20 centavos.” These are my grand crimes.

Salvador’s manifestation was peaceful from the protestor’s side: no hidden artifacts for the police, no homemade explosives, no weapons, no nothing. Only songs about peace. So while I ran up a hill in Salvador away from the police, against traffic, praying to the heavens that no one would shoot me again, that a car wouldn’t run over me, and that I would still have a life by the end of the madness, I kept wondering what exactly I’ve done in my life that merits the police force treating me like the Brazilian version of a terrorist.

The crackdowns on the civilian populations happened because never in recent history did the population take the streets like the June 2013 protests. The government was especially terrified of us, because young people in Brazil are largely considered apathetic. The catch is that we aren’t apathetic because we don’t care about the ridiculous crimes committed; rather, we become apathetic because these ridiculous crimes go unpunished. And we love our soccer. We really love our soccer. So when the government used the one thing that keeps this country together (we often hear that the only time there is nationalism in Brazil is every four years for the Cup) to further destroy it—to further divert public funds for personal use like those military airplanes, special senator credit cards, and other mismanagements—we were angry.

It is probable that some people will forget about the protests once the World Cup begins on June 12. But we won’t really have forgotten; it will just become one more thing in the long laundry list of “back of memory” issues that we store because there are too many awful issues to keep accounted. Like the rising homicide rates with over 40 murders per weekend in Salvador, and the deteriorating health and education systems. Like my student who was shot outside of school when he was seven.

I am tired of forgetting and ignoring. There is no magical formula to erase the deeply entrenched corruption in Brazil. As you watch the World Cup games, though, take some time—just a minute of your time—to reflect on what it has cost us.