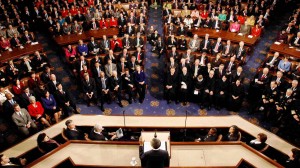 Tomorrow night, President Barack Obama will address the country in the annual State of the Union Address.  He is expected to talk mainly about the progress of his hallmark healthcare bill and about measures to combat rising income inequality. With three million people enrolled through the now-running Healthcare.gov website, and ten states raising their minimum wage this year, these are relevant topics, and a good starting point for Obama. But, more important, President Obama has a chance to set the tone of political rhetoric for the upcoming year. By focusing not on name-calling or puffery and instead on attainable policy goals and accession, Obama can transcend the partisanship that has become commonplace in Washington, and hopefully lawmakers across the aisle will return the favor.

With the healthcare.gov website finally up and running, we can expect to hear a lot about the status of the law’s implementation. With three million people already signed up, and many receiving healthcare for the first time in their lives, Obama has successes that he can talk about. Rather than trying to hide the shortcomings the program has faced in the past few months, he should address them with a mature poise in order to show that he can move on and learn from his mistakes.

Even Republicans have begun to take up the equality issue in recent months, so Obama should have little difficulty talking about it tonight.  However, instead of making the issue one of class warfare, as he is often prone to do, he can gain a leg up in negotiations by explaining the economic benefits of a higher minimum wage for everyone, not just for those working for the minimum wage. Any talk of executive orders that he can push through without Congress’s approval, which have been rumored, will only reduce his stature and provide fodder for his detractors.

While viewer interest in the State of the Union has been slowly declining—last year’s address had the second-lowest ratings in the last 20 years—the address is still one of the only times a single politician has the nation’s attention in today’s 24/7 news sphere. If President Obama can use that time to send an introspective and thoughtful message, rather than a political one, perhaps 2014 will be known as the beginning of the end of the extreme partisanship of the 2000s.  It will be a political risk, but it is one worth taking.