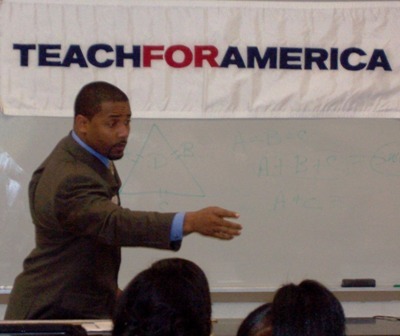 It’s Tuesday morning and Lauren Koster ’12 is awake well before the sun has risen. She tries to scarf down a breakfast substantial enough to carry her through her workday at a well-respected magnet school in downtown New Haven. At the L.W. Beecher Museum School of Arts and Sciences, Koster teaches fourth graders subjects ranging from mathematics to English grammar. Her elementary school teaching responsibilities present far greater challenges than her late nights in Yale University’s Sterling Memorial Library just a few months prior. When she began teaching seven months ago, Koster struggled through what felt like longer days, unaccustomed to her new job’s substantial workload. As she worked to gain the respect of her students in the classroom, calls of “Boola Boola” echoed long in the past.

Koster is a Fellow for Teach for America (TFA), a nonprofit organization founded in 1989 that employs college graduates to teach high school and elementary school students in underprivileged or low-income areas. The conditions are not ideal and the hours are long. Like other TFA teachers who spoke with The Politic, Koster described her work as “one of the most difficult things I have done in my entire life.”

Although classes officially start at 9:30 a.m., Koster arrives at school at least two hours before the opening bell to prepare for the day ahead. Breaks in the school day are opportunities to refine afternoon lesson plans or lighten her evening workload by grading papers. By the time her students finish class at 3:40 p.m., Koster’s day is still far from over.

Her evenings are often spent at the gym, a routine she sees as essential for clearing her mind after the fever pitch of school. In the evenings, she grades her students’ assignments and tracks their results so that she can adjust her lesson plans accordingly. After burning the midnight oil, Koster finally heads to bed to fit in some sleep before repeating the routine again the next morning. Preparation for her teaching certification and discussions with her TFA adviser will have to wait for the weekend.

In 2012, Koster and 5,800 other college graduates were selected from approximately 45,000 applicants nationwide to join the TFA corps for a two year tour. TFA recruiters have relied on Yalies and other talented college graduates to improve education services in under-resourced schools in poor neighborhoods. In 2012, Yale sent 35 graduates to public schools across the country and was ranked eleventh out of medium-sized colleges in the number of students sent to the TFA corps.

Lanch McCormick, Yale’s Associate Director for Counseling Programs at the Undergraduate Career Services, believes that TFA’s commitment to serving underprivileged communities helps explain the high volume of Yale applicants. According to the Dwight Hall Center for Public Service website, each year 3,500 students, or approximately two-thirds of Yale undergraduates, engage in some type of service or social justice activity through Dwight Hall.

“Yale students are incredibly civic-minded and seek to engage in opportunities where they can make contributions and make a difference,” said McCormick. “With TFA, they have the opportunity to do that directly and effect change, and I believe the organization’s mission resonates greatly with Yale students.”

In the midst of an economic downturn, Yalies have increasingly gravitated towards TFA and other jobs in the education sector. With the promise of job security and professional flexibility, the two-year program attracts college graduates who can take solace in its significant, though far from career-determining, commitment. As TFA attracts record-high interest, the application process is becoming as competitive as the hiring processes at top consulting firms and investment banks.

Shanaz Chowdhery ’13, who will teach high school level mathematics at a Washington, D.C. public school next fall, first considered TFA during the second semester of her freshman year. She explained that her initial interest stemmed from her experience growing up in a low-income household.

“What better way to give back than teaching kids?” asked Chowdhery. “I thought that if I could go to an underprivileged community and take the resources that were bestowed upon me and distribute those, then that would be a great opportunity for me.”

It is this type of mindset, Koster argued, that TFA representatives look for during the recruitment process. “The work is challenging, so you have to internalize the mission – to understand what is behind Teach for America.” Before teaching in underdeveloped and sometimes dangerous communities, Bulldogs must first bid farewell to the ivory tower.

After four years of toasting at Mory’s, chasing society taps, and focusing primarily on personal development, Yalies must quickly flip the switch. As a part of TFA, these recent college graduates are responsible for at least 30 others and must recognize that each action they take and every word they say plays a crucial role in students’ development.

Victoria Perez ’11, who is currently finishing her second year teaching at a charter school in Bridgeport, CT, said things became easier after her first year. But she admits that nothing could have prepared her for this experience. Among the most trying challenges, Perez said, is teaching her young pupils “how to be people.”

“In first grade, they have to focus on how to read, but you also have to teach them how to have a conversation and how to share,” she explained. Teaching in Bridgeport, where a majority of students come from troubled backgrounds with “very sad stories,” Perez has to focus on what she can control. “There’s nothing I can do as a teacher to change what has happened to these kids before the first grade, but I can change how someone has a great day at school. Their stories are very unfortunate, but [the stories] don’t have to have an effect on their learning.”

Koster believes her first year in the corps has given her an opportunity to build on the foundations she developed at Yale.“This experience very much matures you, gives you an incredible amount of focus and perspective and [allows you] to make a very positive impact on the lives of others.”

Despite the immense challenges she faces on a daily basis, Koster believes Yale students can thrive in the TFA environment because their years as undergraduates have forced them to learn quickly, think critically, and adapt to difficult situations with ease.

While Koster and many TFA corps members have embraced their time in the organization, others point out its flaws. One critique shared by several TFA fellows interviewed was that the organization does not devote enough attention to professional development. Each teacher has only one mentor, who is in charge of thirty different teacher-fellows. As a result, some corps members feel they receive insufficient guidance.

“That first year is mostly about keeping your head above water,” says Perez. “I think, just like the first time you do anything, it’s figuring out your strengths and weaknesses. Going into the second year, you get a handle of teaching—the kids are easier to handle and kids are getting things quicker.” Perez did say she wished TFA held its corps members to a higher standard of professionalism, noting that teachers are not always held accountable to the organization’s basic requirements such as meeting deadlines.

While many involved in the organization relish their time teaching, Perez explained that corps members have a wide range of experiences, making it difficult to pinpoint a “typical” teaching experience. Considering that corps members lead high-need classrooms in a diverse range of neighborhoods in 36 different states, some teachers ultimately do not have positive experiences.

One Yale graduate and current TFA corps member, who asked to remain anonymous, said she can’t wait to be done with her two-year stint with the organization. “These have been the most excruciating years of my life and no one really prepares you for that,” she said. “People talk your ear off about how meaningful the experience is and how adorable the kids are, but they tend to leave out the sleepless nights and the constant berating.”

While some corps members stay involved in teaching or education policy, others move on to different career fields after their two-year stint. This has raised crucial questions about TFA’s effectiveness and its role in education reform at large. In Perez’s class of Yale corps members, half plan to stay in the classroom, while the rest will pursue other career opportunities. Perez also noted that students’ decisions to spend additional years teaching depends on the region in which they taught. A high percentage of those in the Mississippi Delta area stay on for a third year, while few California teachers continue teaching.

Right now, Perez is undecided, but leaning toward teaching another year. When TFA recruiters pitch the organization, they explain that after two years one can move on to graduate school. Perez said that when she joined the organization she didn’t know what career path she wanted to pursue. Although she has had a great core faculty group at her school, she “doesn’t see [herself] in the classroom forever.”

Carissa Youse ‘13, who did not apply to the TFA program but plans to become a full time teacher, said she felt that many corps members did not maintain strong commitments to teaching. This lack of commitment, Youse said, hurts the students with whom corps members work.

Although she believes TFA teachers are noble, Youse, who plans to pursue a higher degree in education, has ideological problems with the program. “TFA tries to identify people who can become leaders in teaching, but ultimately identifies people who aren’t going to continue teaching,” she explained. “They’re selecting idealistic people with very different backgrounds from the places they’re going into, and placing them in some of the most difficult teaching situations with little support.”

Conflicting attitudes towards the organization notwithstanding, it seems many Yalies will continue to apply to the organization — whether to launch their teaching careers, heed the call to public service, bridge the gap to graduate school, build future career opportunities, or simply to pad their resumes. Many Yale students not interested in teaching careers often look to the TFA experience as a leadership challenge to embrace.

TFA is not the silver bullet to solving the nation’s education problems or improving teacher quality. Perhaps the program’s most substantial impact is providing future leaders in diverse professions with firsthand experience in low-income schools. “The experience that one has in the classroom carries into so many other fields, because these fields touch on the same issues one faces in the classroom,” Koster said. “The thousands of alumni who have been a part of TFA who have then gone into different fields serve as a testament to these experiences being ones that you carry with you no matter what.”