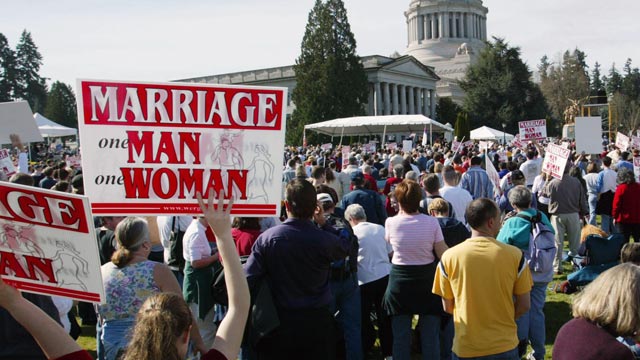 On the morning of June 26, 2013, cheers erupted outside the Supreme Court building in Washington, D.C. News of the Court’s decision in United States v. Windsor rippled through the crowds. Same-sex marriage supporters brandished posters, waved rainbow flags, and shared hugs, tears, and kisses with loved ones. Chants of “DOMA is dead!” emerged from the din.

The 5-4 ruling struck down a major section of the Defense of Marriage Act, opening up hundreds of federal benefits to married same-sex couples. Less than an hour later, media “runners” sprinted down the steps again to announce a 5-4 dismissal of Hollingsworth v. Perry, clearing the way for same-sex couples to marry in California. Both decisions were hailed by gay rights activists as major steps in the right direction. Supporters proclaimed their vision of a day when same-sex marriage would be legal in all fifty states.

Their optimism was understandable. National polls indicate that support for marriage equality has gained momentum in the past two decades, especially among younger generations. Same-sex marriage is now legal in sixteen states and counting. A poll conducted by the Pew Research Center two weeks before the Supreme Court decisions showed that a slight majority of Americans favor same-sex marriage for the first time. Moreover, significant majorities on both sides of the issue feel that legal recognition of same-sex marriage has become “inevitable,” destined to make a lasting mark on modern America.

Yet while same-sex marriage supporters celebrated the June 26 decisions, three academics were busy at work preparing a response. Sherif Girgis, Ryan T. Anderson, and Robert P. George — authors of “What is Marriage?,” an influential essay and book of the same name — posted a blog entry in The Public Discourse the following day, imploring readers to “keep up our witness to the truth about marriage, by word and deed, until it is safely beyond judicial overreach.”

Girgis, Anderson, and George rose to prominence in the same-sex marriage debate following the publication of “What is Marriage?” in the winter 2011 issue of the Harvard Journal of Law and Public Policy. The essay, which made a secular case for defining marriage as between a man and a woman, became the most downloaded paper on the Social Science Research Network in 2012. That year, Girgis, Anderson, and George expanded the paper into the book, What is Marriage?: Man and Woman: A Defense.

The authors’ backgrounds are almost as surprising as their arguments. Girgis, Anderson, and George — Ivy League academics with secular inclinations — are unexpected proponents of a viewpoint that is often characterized as religious and anti-intellectual. Moreover, despite the fact that same-sex marriage is largely considered a “generational issue,” Girgis and Anderson are both below the age of 32.

“What is Marriage?” originated from private conversations about matrimony among the three authors. They began by reframing the question behind the same-same marriage debate. “We came to see that the real question is not ‘Who can marry whom?’ but rather ‘What is marriage?’” explained George, a professor at Princeton University. They decided that addressing the latter question was essential to answering the former.

While surveying conceptions of marriage, Girgis, Anderson, and George noticed two conflicting beliefs. Same-sex marriage proponents appeared to understand marriage as an “emotional bond” fulfilled by consent — a conception George felt was “radically at odds” with its historical meaning. The authors instead see marriage as a conjugal relationship fulfilled by bearing and rearing children, defined by George as the “comprehensive sharing of life… founded upon the bodily union made possible by the sexual-reproductive complementarity of man and woman.”

From these beginnings, Girgis, Anderson, and George constructed an argument against legal recognition of same-sex marriage. They defended their conception of marriage on moral and practical grounds, responding to key objections along the way, such as “If not same-sex marriages, why infertile ones?” as well as, “Why does the state have an interest in regulating some relationships?” and,“Isn’t marriage just whatever we say it is?”

Stunned by how much attention their article received, the authors expanded their argument to widen its readership and address key critiques. While recognizing its ultimate lack of success in the Windsor decision, George credited the argument with influencing Justice Samuel Alito’s dissenting opinion. Outside the legal system, George believes that their work has helped those opposed to same-sex marriage better understand their beliefs. “We frequently hear from Catholics, Evangelicals, Latter-Day Saints, Orthodox Jews, and more recently Muslims, who tell us that they had not really understood the basis of their belief in marriage… until they read our book,” he said. To an admittedly lesser extent, they were able to convince some same-sex marriage supporters to switch sides.

Unsurprisingly, “What is Marriage?” has attracted a number of vocal critics. Joseph Fischel, a professor in the Women’s, Gender, and Sexuality Studies (WGSS) department at Yale, challenged the authors on several fronts. Noting the authors’ failure to “engage in any serious way with scholarship by historians of marriage,” Fischel countered their central claim that a true purpose of marriage exists, defined by monogamous permanence and the possibility of procreation.

“That love or monogamy has anything to do with marriage is an invention of modernity and certainly not universal,” he said. “To neglect political power and property transfer as enduring (but also historically contingent) properties of marriage is tendentious.”

Fischel questioned their moral and pragmatic arguments, citing a contradiction in their definition of conjugal marriage. “[They] want to argue that marriage is a good unto itself independent of procreation, but then at other times insist that goodness of the marriage relies upon sexual complementarity and its moral product: the child. You cannot have it both ways.” He also criticized the practical consequences that their view of marriage would have on same-sex couples already raising children. Denying them marriage would result in a loss of the stability, benefits, and protections conferred by legal recognition.

“So much for the child,” Fischel remarked.

According to Fischel and other proponents of same-sex marriage, the underlying premise of their argument also threatens single parents, unmarried parents, and other legal guardians. “What truly underpins their defense of man-woman marriage is not sexual exclusivity, durable intimacy, or even procreation, but nostalgia for a normative order that never was,” he pointed out. Although Fischel doesn’t think that Girgis, George, and Anderson are bigots, he characterized their argument as “absurd and ahistorical at best, and disingenuous and eugenicist at worst.”

Maria Trumpler, Director of Yale’s Office of LGBTQ Resources and a lecturer in the WGSS department, agreed with some of Fischel’s critiques. Her research as a social historian suggests that marriage is an “ever-changing thing that people create for the purposes that they deem to be important,” she said. Outside of details about time, place, and procedure, she added, “there’s [no] absolute notion of what marriage should be.”

Despite his critiques, Fischel commended Girgis, George, and Anderson for “jumpstarting a needed conversation” among same-sex marriage supporters. “We cannot, without further qualification, base our moral arguments for marital inclusion exclusively on either love or consent,” he conceded, stressing the importance of using other normative tools for the movement’s advancement.

Trumpler expressed hope that the debate will finally be resolved in order to shift focus to other LGBTQ issues that are perhaps more pressing, such as discrimination in the workplace and military. “There’s a concern within the LGBTQ community with the amount of energy, time, and money [advocating for same-sex marriage] has taken,” she noted.

In any case, Girgis, George, and Anderson have succeeded in galvanizing a nationwide debate about the nature of marriage. For George and others, the idea of marriage — conjugal or otherwise — had been “simply taken for granted.” While this is no longer the case, the full impact of their argument in the legal or social realm remains to be seen.