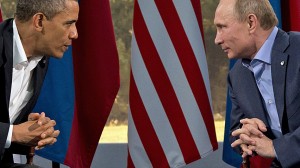 Though the “reset” pursued by President Obama in 2009 has yielded some productive results—most notably the New START treaty, signed in 2010—it was a commitment to cooperate more effectively in areas of mutual interest, rather than to fundamentally shift either party’s attitude towards issues in which major disagreements exist. It seems the increasing polarization over a greater number of hot-button issues will jeopardize any real collaboration between Russia and the United States, especially as a rising tide of resentment sweeps the population of both countries. While President Obama is under greater pressure to appear strong in the face of perceived Russian aggression and defiance of international law, President Putin is being spurred on by his desire to see Russia restored to its former prominence on the geopolitical stage, his sizable popularity, and the knowledge that in the post-Iraq-War era the West is weary of confrontation.

The two leaders are set in deep opposition to each other, and that, combined with an apparent mutual personal dislike of one another, makes it highly unlikely that cooperation between the two nations will be possible in the near future, and especially improbable if President Putin continues to pursue an expansionist agenda.