The Yale University Art Gallery (YUAG) frequently switches out its pieces on display. It’s a common practice for all galleries that are so lucky as to have a stored collection. But it’s still jolting for me to return and find a particularly beloved painting or sculpture suddenly absent from display, especially when it provides a traditionally underrepresented voice or perspective.

On my last visit to the YUAG, I found such an absence on the third floor, in the section of Modern and Contemporary Art. I was wandering around familiar haunts, admiring both new pieces and old, but after turning the corner, I froze. A self-portrait had been taken down and was replaced with an abstract piece. 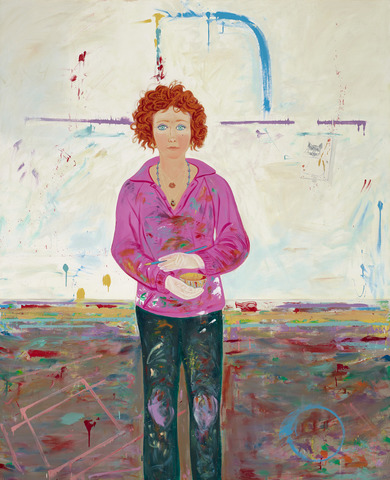 Nothing too shocking in that itself, but the portrait was of Joan Brown, titled “Self-Portrait in the Studio”. It was one of the few paintings by a woman in that wing; certainly the only self-portrait by a woman. It is a grand piece, both in skill and scale, stretching across most of the wall upon which it once hung. The vibrant colors, including Brown’s fiery red hair and pink jacket, stand out with a vengeance against a paint-splattered, messy background. This area of the gallery felt somewhat quieter, somewhat sadder with her absence.

Her portrait stands out not only because Joan Brown is a talented artist but because women depicting themselves through art is such a rare form of empowerment. Brown’s piece is also distinct in that she creates her place in her own studio, therefore claiming her right to be an artist. The idea of being able to paint oneself, to see oneself without considering the eyes of others, is radically powerful.

Why don’t more women paint self-portraits? Why doesn’t the YUAG display more of them? Perhaps it is because women are taught to see themselves through the eyes of others, whether they be men or children or even other women. Women are taught to think about how they appear but are not encouraged to dwell on who they actually are. We purchase flattering clothing, invest in quality concealer from a young age, research how to best remove our stretch marks and under-eye bags. We dye our gray hairs, we wear Spanx under our dresses, and we smile at all times to hide the pain caused by the blisters of our damn high heels. To paint a self-portrait requires hours, possibly hundreds of hours, of confronting one’s own image without any of these crutches or lies. The self-portrait of a woman, therefore stands in defiance to a culture of self-abnegation. It’s the act of reclaiming bodies that we have been taught to cede to others and declaring that we are worthy to be the subject of art as opposed to its object.

The central point of focus in “Self-Portrait in the Studio” is not on Brown’s face or her body: it is on her hands, as they cup some unseen, beautiful force in front of her, as if she is about to summon something out of thin air. Her hands glow almost white, drawing the eyes to her power of creation.

I understand the practice of switching out pieces on display. But I do miss Joan Brown being there to remind me that a woman can see herself not just as a woman, but as an artist. More than that: a woman has the right to paint herself and therefore immortalize herself as such.