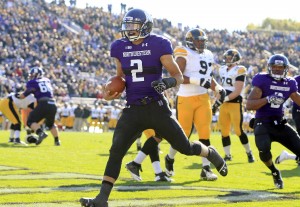 Last Wednesday, the National Labor Relations Board granted members of the Northwestern University football team the right to unionize. Peter Sung Ohr, the NLRB director who handed down the ruling, gestured towards the quasi-professional responsibilities of the players. During the season, he wrote, they are held accountable for up to fifty hours of football activities per week, including travel, and during the offseason, they remain obligated for up to twenty hours per week. The Northwestern Athletic Department holds purview over football players’ housing options, outside employment, personal cars, and social media accounts. If a player wishes to take a class that conflicts with practice, the latter engagement takes precedence.

The National Collegiate Athletic Association, better known as the NCAA, is worried that the decision could have far-reaching implications on college sports, particularly if other teams follow suit. By enforcing the amateur status of college athletes, the NCAA has enriched itself in an era of billion-dollar TV contracts, million-dollar coaching salaries, and luxurious sports facilities. The players’ attempt to unionize should be viewed more as a symptom of the commercialization of college sports than as a direct cause.

However, the players’ triumph would only further exacerbate this trend. Although at this stage the Northwestern players are not seeking payment, that eventuality seems just around the corner, and paying college athletes would not only add to divisions between these athletes and their student peers but also further focus athletic resources on sports that can be monetized (effectively, football and men’s basketball) and away from sports that cannot be. While we may maintain some nostalgia for the days when college sports were truly amateur and “student-athlete” was not an oxymoron, the NLRB’s decision reflects the modern college sports landscape and the direction in which it is heading.