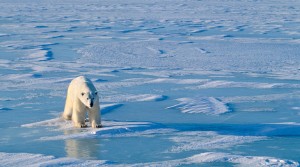 The Intergovernmental Panel on Climate Change (IPCC) issued a frightening, yet unsurprising, report on Monday declaring the profound effects that climate change is having on our planet. Ice caps are melting at dramatic rates, extreme weather is increasingly frequent (from mega-storms to the “polar vortex”), and the loss of biodiversity is rampant. These consequences will touch every corner of the globe, but, alas, will most heavily impact the world’s poorest regions, exacerbating their unrelenting poverty trap. The sobering account also made it clear that if we remain on our current course, we are destined for far worse.

Climate change may be the greatest challenge our generation faces, yet our own government appears largely disengaged from the global problem solving that this issue requires. The oil and gas industry and a small cast of wealthy individuals—including the Koch Brothers and Rupert Murdoch—hold a powerful grip on our politicians through billions of dollars of combined lobbying and campaign contributions. These powerful interests are responsible for the contrived pseudo-debate about the “science” of climate change, and for successfully keeping action to address climate change off of the policy agenda.

We must, however, also fault our political representatives for not standing up to these powerful interests, even as we continue to witness catastrophe after catastrophe. Aside from fragmented pieces of executive action, President Obama’s administration has yet to put forward to the American people a single comprehensive and long-term energy strategy. The president needs to take action, assume leadership, and illuminate a powerful vision of how we can practically transition to a low-carbon economy in conjunction with other global leaders, including China and India. Thankfully, in recent weeks Secretary of State John Kerry has shown a deeper commitment to addressing climate change; hopefully this marks a reawakening of leadership in preparation for the next big international agreement, tentatively set to be signed in December of 2015. Unfortunately we do not have a single moment to waste.

Hannah Sachs is a writer for The Politic from New York, NY. Contact her at hannah.sachs@yale.edu. View more posts