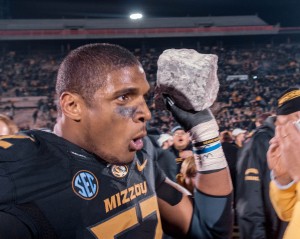 Tears streaming from his eyes, Michael Sam picked up his phone to receive news that the Saint Louis Rams drafted him with the 249th pick of the NFL draft. Upon hearing the good news, Michael Sam embraced his boyfriend, and the two shared a kiss on national television.

In an ordinary draft season, no one would talk about a seventh round pick, let alone a late seventh round pick. But Michael Sam is different; he is the first openly gay athlete to ever be drafted into the National Football League. The momentous occasion continues to garner widespread media coverage as the Michael Sam story is declared a victory for the greater gay rights movement.

President Barack Obama released a statement congratulating “Michael Sam, the Rams, and the NFL for taking an important step forward in our Nation’s journey.”

While much of the publicized attention surrounding Michael Sam has been positive, a malicious aura of animosity towards the LGBTQ community has surfaced.

Miami Dolphins safety Don Jones tweeted “OMG” and “horrible” in response to Michael Sam’s kiss with his boyfriend, and Derrick Ward, a former Giants running back, tweeted “I’m sorry but that Michael Sam is no bueno for doing that on national tv” and “Man U got little kids lookin’ at the draft. I can’t believe ESPN even allowed that to happen.”

Although Don Jones later apologized for his spiteful remarks, his initial reaction suggests that NFL officials must actively work to make the league more tolerant and accepting of the LGTBQ community. However, the overwhelming support for Michael Sam from other football players and fans who have already purchased Michael Sam jerseys en masse signals that the NFL is headed in the right direction.