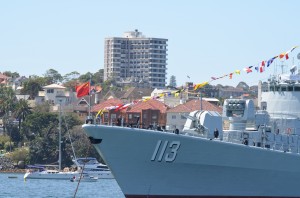 The 1700s were dominated — politically, economically, militarily — by France.  The 1800s gave way to Great Britain.  The 1900s belonged to the United States.  The 2000s, however, may ultimately be remembered as the century of a country from a very different part of the world: China.

The Asian nation’s rise to global power has been impossible to ignore. Over the last 30 years, it has become the world’s fastest-growing major economy, and its real per capita income has ballooned by more than 1,300 percent. China is now the world’s largest exporter and manufacturing economy, as well as its second largest importer.

China, along with other countries, has struggled to redefine its place within the new global order created by its climbing power. Yet in this age of rapid change and globalization, when the China and the other BRIC countries occupy the spotlight, how are countries out of the world’s focus faring? In particular, Australia — the middleman and middling power of the Pacific region — has a far harder task than other many nations in finding its new place. Indeed, it must redefine itself amidst its own shifting relationships with other nations.

In recent years, Australia has found itself on one end of a rich economic relationship with China. The exchange of goods and services streaming both ways between these mammoth nations is nearly twice as large as the flow between Australia and Japan, its second largest trade relationship, and even larger than that between Australia and the United States. “Australia is one of our closest allies, and it is definitely one of our three closest friendships,” Jeff Bleich, the U.S. Ambassador to Australia, said in an interview with The Politic. The Cold War-era political and military alliance, after all, was powerful enough to persuade Australia to join the coalition invasion of Iraq in 2003. Moreover, Kevin Rudd and Tony Abbott – the two most recent candidates for Prime Minister – strongly advocated a robust Australia-America partnership.

Nevertheless, Australia’s relations with China are poised to eclipse those with the U.S.

The status quo is indeed changing. China has redefined its political interactions with Australia by shifting away from its traditionally laissez faire doctrine of diplomacy and announcing a “strategic partnership” between the two countries in April. China’s President Xi Jinping asserted his continued commitment to this partnership in a call to Prime Minister Tony Abbott. “I also firmly believe that as important nations in the Asia-Pacific region, China and Australia entering into closer cooperation not only serves common interests but will also add positive attitude to the region and also peace and development of the whole world,” Xi said.

As rapid as China’s rise on the world stage may seem, its decision to establish a strategic partnership was no sudden move; the plan was painstakingly negotiated over the last two years. In 2010, Xi – then Vice President and a member of China’s immensely powerful Politburo Standing Committee — visited every state and territory in Australia, and he even developed an affection for aboriginal art. Less than a year before that, Li Keqiang — then Vice Premier and now the Premier of China (the second most powerful individual on the Politburo Standing Committee) — visited Australia as well. That China’s two most influential government members visited Australia while being groomed to take office demonstrates the importance China places on the bilateral political relationship.

Official state visits hardly scratch the surface of Chinese attempts to move closer to Australia. The countries engage in high-level dialogue on a regular basis. They have discussed defense for over fifteen years, but recently, China has put effort into transforming conversations into action. The People’s Liberation Army of China has commenced exercises with the Australian military. This past April, the two countries dedicated themselves to carrying out an annual dialogue — a diplomatic honor China reserves for only a few countries. It is evident, as Dr. Bates Gill of the United States Studies Center states, that “China takes Australia to be a key partner.”

Professor Andrew MacIntyre, Dean of Australia National University’s College of Asia and the Pacific points to even more progress, adding, “While this strategic partnership is very much the news item, there’s been an evolution of cooperation” — it now expands beyond foreign and trade ministries to other areas of governance, including cooperation in education, tourism, and environmental issues.

“Continually, over many years, Australian and Chinese policymakers have been looking at ways of enhancing cooperation, ranging from educational cooperation to policing cooperation, including health, transportation, monetary exchange,” MacIntyre noted.

China is so dedicated to building the relationship that its efforts have extended into the realm of pure diplomacy, reaching beyond the practical matters of functional governance and economic development. Just weeks ago, on October 4, a Chinese warship sailed into the Sydney harbor as part of an international celebration of the Royal Australian Navy’s centennial. Such a demonstration may be light on substance, Gill argues, but Chinese participation is undoubtedly a sign of its pursuit of enhanced Sino-Australian relations.

On what he would likely consider the more substantive side of matters, Gill adds, “I think another place to look would be long-term supply contracts that China signs with Australia companies, like [those for] gas, ore, agricultural products like cotton, [and] mutton,” Gill said. “China sees Australia has a reliable long-term source of imports for the Chinese economy.” Furthermore, “There does seem to have been in the last four to five years an increased part on China in its relationship with Australia. There have been a number of factors over the last few years going into this.” These factors — the growing importance of Australia’s resources, the increasingly pivotal role Australia plays in the Pacific region, and the allure of courting a traditional American ally — “have helped raised the prominence of Australia in the minds of the Chinese foreign policy [makers],” says Gill.

China’s cautious shift from a purely economic relationship to a much deeper, diplomatic one has its own advantages. Experts note that slow, organic, and grassroots actions help build a lasting change while not threatening the established regional order. A more aggressive shift in the relationship would almost certainly have been met with a backlash from Australia, much like the U.S. responded to China’s rise with a “shift to the Pacific.” As Gill comments, “The peak of [Chinese] aggressiveness was in 2010, and I think that the Chinese leadership has realized that overstepping undermines its own strategy… If China wants to continue the benefits it has today, it will have to proceed cautiously as it grows stronger.”

Nothing Special At All?

Of course, Australia is not the only partner China is courting; the Asian nation’s foreign policy as a whole is undergoing a massive evolution. MacIntyre suggested that this larger shift derives from an increasing desire to pursue cooperation globally, and to reap the benefits from the resulting partnerships. “[The broadening of the Australian-Chinese relationship] is a continuation and extension of where things have been under Hu Jintao. It’s in nobody’s best interest for less cooperation and collaboration,” explains MacIntyre. “More is better.” Additionally, he continues, China has realized aggressive actions over the past few years have tarnished its reputation. Therefore, the shift in Chinese foreign policy is an element of a broader Chinese push to connect with nations in the Pacific region.

“Because China has grown so large, it has grown so much faster, and because its political system is so different from everyone in the region, it’s affected everyone. And China is aware of that,” MacIntyre explains. Gill agrees: “The number one priority for China is economic development,” he says. Chinese foreign policy has long centered around economic gain, and more alliances – whether with Australia or other with nations in the region — will lead to more potential partners in trade.

Professor Miles Kahler – currently teaching at University of California at San Diego’s School of International Relations and Pacific Studies – affirms that China is eager to reap the benefits of cooperation. “[Over the past few decades] China actively pursued regional cooperation through institutions, from the Shanghai Cooperation Organization to ASEAN Plus Three and numerous preferential trade agreements,” Kahler notes. “Those policies have not changed as Chinese regional military power has grown.” As China builds its presence in Australia, then, it simultaneously builds links with even more states.

The rich and varied interactions make it seem as if China were eager to dive into cooperation on virtually any front – yet in reality, it constructs its interactions with Australia strategically. According to Professor Geoffrey Garrett, of the University of New South Wales and United States Study Centre, this is due to Australia’s strong connection to the U.S. Although China is particularly attracted to Australian natural resources, argues Garrett, “Australia is rich and a U.S. ally — so the approach has to be very different.”

MacIntyre echoed Garrett’s sentiments, explaining that Chinese foreign policy, like any foreign policy, is based on the audience. “The way that China relates to Thailand or Australia is different from the way it relates to Korea or Vietnam,” he says.

The Kangaroo and The Dragon

Australia is neither China’s dearest ally nor its most threatening rival. By no means does China act as Australia’s best ally either. Nevertheless, the two nations’ relationship steadily broadens with each tentative yet groundbreaking action between the two states.

This relationship is important for the region, where Australia serves as an important power broker. It enjoys influence, wealth, and American support. China is universally recognized as a great power and a potential superpower – perhaps even a rival to the United States. Therefore, the Sino-Australian relationship has the potential to completely upend geopolitics in the region.

The debate over how close China and Australia should be, and what this partnership means to the international community, will not end anytime soon, for relationship-building is a slow science. The two nations started off increasing interactions through trade and grassroots efforts. But the interactions are becoming more complex and official: from Chinese government members visiting their neighbor down under, to the Chinese war ship making a celebratory appearance at Sydney harbor, events marking cooperation have risen to an unprecedented level. Surely, these displays of friendship and desire to collaborate will bring the two nations closer together.

How exactly this redefined relationship will affect the future of the region, however, is anything but certain.