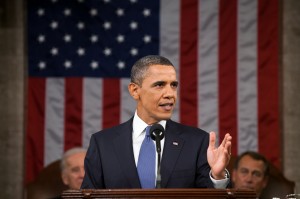 For us politics nerds (and Politic nerds), the State of the Union night is practically a holiday. But instead of good tidings and merriment, there’s live tweeting, live blogging, and all the snark you could ever want.

For the past few years, it’s been hard to reign in the snark. The House Sargeant-at-Arms would bellow “Ladies and Gentlemen, the President of the United States,” to much cheering and applause. President Obama would make his way down the aisle, flashing that million-watt smile, and, with the spotlight all to himself, he’d give the big speech. But after the shindig was over, after his motorcade left and ninety-nine percent of Congress faded back into obscurity, little change occurred. All the pomp and circumstance faded into the same inertia.

A year ago, Obama promised delights like comprehensive tax reform, infrastructure legislation, a bipartisan climate change bill, immigration reform, a gun control bill, and more. Yet, yesterday we were reminded that inclusion in the big speech doesn’t predict action. Immigration and gun control were anchors of the 2013 speech, but only received brief mentions in the 2014 speech. Congress didn’t tackle global warming last year, and this year Obama acknowledged that reality, pledging to use his executive authority to reduce carbon pollution.

The threat of executive authority was the thread that ran through the address. Pundits called 2013 the lost year or Obama’s own annus horriblus because there was little sense of momentum. Apparently, the White House solution is to throw Congress under the bus and keep moving.

“America does not stand still, and neither will I,” the President said last night. “Wherever and whenever I can take steps without legislation to expand opportunity for more American families, that’s what I’m going to do.”

At this, there was much applause. This is despite the fact that members of Congress, as a result of their own inertia, are seeing their own relevance disappear before their very eyes. Will this be the story of 2014—a subdued Congress and a re-invigorated executive branch? For Obama’s sake, I would hope so.