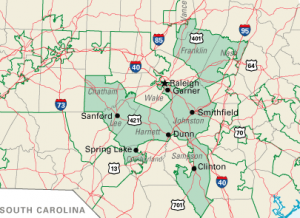 Things have gone from weird to weirder down in North Carolina’s 2nd Congressional district.

The race first gained national attention when performer Clay Aiken, the second place finisher on American Idol’s 2003 season, announced he would seek the Democratic nomination for the seat in a heartfelt campaign ad that touted his North Carolina roots.

Despite his celebrity status, however, Aiken’s path to the nomination was far from certain. By the time of qualifying, he had drawn tough primary challenges from former state Commerce Secretary Keith Crisco and family counselor Toni Morris.

In fact, the race proved so close that a May 6th primary turned up inconclusive. Though Aiken appeared to have a slight edge over Cristo by only a few hundred votes, election officials that night declared the race was too close to call.

But as both candidates waited for the Board of Elections to count absentee and provisional ballots, 71-year-old Cristo suddenly died from an apparent freak accident less than a week after the primary after slipping and falling at his home in Asheboro.

Upon hearing the jarring news, Aiken immediately suspended all campaign activity and posted a black page to his website praising Cristo as “a gentleman, a good and honorable man and an extraordinary public servant.”

Then, less than 24 hours after Cristo’s death became public, the Board of Elections officially declared Aiken the winner of the Democratic primary over his now-deceased rival with 40.9% of the vote—enough to avoid a runoff, according to North Carolina law.

But as Aiken knows well from his Idol days, the show must go on. Aiken, an openly gay man running in a conservative district, will face incumbent Renee Ellmers (R) in a November general election.