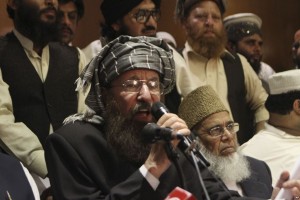 To say that Pakistan was in a state of heated debate, of dreadful anticipation, of palpable anxiety on March 26, 2014, would be an understatement. The international media, perennially abuzz with political gossip, too often hitch their stars to sensational theories in order to answer that oft-repeated question always swirling around Pakistan’s negotiations with the Taliban: “Will this time be different?”

This March, however, when that tired old question was rehashed once again, it resonated louder than ever before. It was no longer just part of the daily banter of political talk shows, or the standard dinner conversation initiated when there is nothing else left to discuss. When a group of Pakistani government officials flew a helicopter to an undisclosed location in the country’s tumultuous tribal belt on March 26 for the first of a series of direct talks with the Tehrik-e-Taliban Pakistan (TTP), an umbrella organization of the Taliban groups found in Pakistan, the question “Will this time be different?” meant something entirely new — and rightly so.

On March 1, Pakistan’s government had entered into a month-long ceasefire with the TTP as a starting point for the talks. Pakistan had agreed to suspend airstrikes against the Taliban, and the Taliban had in turn agreed to cease all acts of violence. For many hopeful onlookers, the bloodshed that has over the years claimed the lives of tens of thousands of Pakistanis looked to be drawing to an orderly halt. “If you actually want to find a solution to the problem, you have to talk to the actors that are part of the political equation,” said Jolyon Howorth, a visiting professor of Political Science and International Affairs, in an interview with The Politic. “You can’t exclude them; you can’t ignore them; you can’t get away from them. They are there, and they are part of the problem. Therefore, they have to be part of the solution. We have seen this time and time again, in South Africa, in India, and in Vietnam.”

On March 3, two days after the preliminary negotiations, a splinter group of the TTP called Ahrar-ul-Hind carried out an attack upon the capital more devastating than anything the city had experienced in the past five years. From the perspective of many onlookers, the attack called into question the sincerity of the TTP’s intentions to negotiate. Elizabeth Hanson, who has taught the course “World Politics in South Asia” at Yale since the early 1990s, wondered whether “the only reason [the Taliban is] negotiating is to give themselves time to regroup.” In addition, many harbored concerns that the TTP was assisting the Ahrar-ul-Hind in conducting an attack that was perhaps too well-organized for the little-known splinter group.

General Stanley McChrystal, Senior Fellow at Yale’s Jackson Institute of Global Affairs and former Commander of ISAF and U.S. Forces in Afghanistan, explained to The Politic, “The problem with the TTP is that if you are a TTP leader and you negotiate, to a certain part of your organization, you have now sold out. A part of your organization simply decides that ‘I am not going to abide by that.’” If Hanson’s and McChrystal’s concerns are correct, the talks would be largely stripped of their purpose, their moral legitimacy, and the promise of stability they offered  because they are relying on reasoning with a group of militants that is unwilling to end the violence that has roiled Pakistan.

While critics have voiced similar concerns during past negotiations between the Pakistani government and militants, more was at stake this time than just the duration of the ceasefire, the fates of the people who died in Islamabad, or the dozen TTP prisoners released by the government as part of the talks. This time, a make-or-break election loomed just across the border in Afghanistan. As Hanson pointed out, “There is concern that the TTP wants the ceasefire so they can go over the border and cause trouble for the elections in Afghanistan.” Nevertheless, Pakistan’s government eagerly embraced the March 26 negotiations. With the Pakistani armed forces vocally advocating military action instead of talks, with the aforementioned concerns left unaddressed, and with a government-in-the-making in Afghanistan, will this time be different?

“I would be cautious,” McChrystal said of the negotiations. “There is not a great history of them. The negotiations from 2004 to 2009 were a series of frustrations.” In 2004, the Taliban violated the Shakai agreement — which granted the militants amnesty, promises of prisoners’ release, and compensation for their casualties — within days of signing the accord. In 2005, the Sargodha peace deal made similar promises, but Baitullah Mehsud, then the leader of the TTP, never adhered to its terms. He was killed in a drone strike when the state realized it had no options other than military action.

McChrystal said that the government of Pakistan had sometimes been guilty of shortsightedness. “Honestly, I don’t think the government of Pakistan has ever gone into the negotiations with a completely realistic approach,” he said. “I think they have taken an approach that in some cases was expedient — ‘We’ll try and cut this deal, and then we’ll move forward’ — and I don’t think it was truly realistic because the problem was bigger than they assessed.”

In 2008, the two sides concluded another deal in Khyber Agency (one of Pakistan’s eight tribal regions), but again the military eventually had no choice but to act. Just one year later, an agreement was signed with the TTP in Swat, a district in the north-west tribal areas of Pakistan, which led to the military’s withdrawal from the territory. But the TTP quickly violated the terms by annexing the surrounding territories of Buner and Shangla and rejecting the constitution. It came as no surprise, in light of this history, that a terrorist attack this April came on the heels of the March 26 attempt at negotiations.

The TTP’s violations of the negotiated agreements indicate to experts that they are not negotiating for the sake of ceasing violence or submitting to the state. “People don’t negotiate because they like you and want to talk to you,” McChrystal said. “This is the real world. They negotiate because they think that’s the best way for them to get as much as they can possibly get.” In each instance of broken accords, TTP leaders likely believed that acts of violence could help advance their cause more than simple adherence to the terms of agreement. “The only way they will negotiate reliably is if they believe that the best outcome comes from negotiation and there is not another way to pressure the government and get a little more,” McChrystal said. Therefore, he reasoned, the Taliban would take the talks seriously only if its leaders were convinced that opposing the government was a dangerous road, and if they believed that there were significant economic and social advantages to negotiating instead.

“As things stand, the militants have not been convinced of the advantages and they haven’t been convinced of the threat. If I were the TTP, I’d come to the table and I’d wait to see how things were playing out,” McChrystal said. “If Pakistan’s relationship with the U.S. goes completely badly, I would say, ‘Well, Pakistan is likely to be in a more difficult position.’” He added, “The government of Pakistan is perceived by the tribal groups to be weaker than the government of Pakistan may want to be perceived. What’s likely is that it’s going to take military action by the government — effective military action — which convinces the tribal elements and makes them say, ‘This is not going to work, let’s cut a deal.’ As long as they believe that the government is incapable of doing that effectively, there’s no reason to negotiate.”

Dr. Hassan Askari, a journalist and an influential political and military analyst in Pakistan, said that transparency was an issue in evaluating the negotiations. “It is difficult to say what the talks will achieve because the government doesn’t disclose its demands and objectives to us,” he said in an interview. Still, he said that the TTP is highly unlikely to submit to the constitution of Pakistan and will almost certainly demand control over the frontier regions instead. According to Askari, “The talks seem to be headed nowhere. And right now, the government appears to be in a weaker position than the TTP. While this sort of indefinite negotiation process could be given a shot for a week or two,” the military will ultimately have to be engaged.

Saadia Saeed, who has lived and learned in Pakistan and currently works at Yale researching Pakistani nationalism, voiced a similarly skeptical view. “Negotiations are a short-term solution, but in the long run, they are going to create more problems because they are going to legitimize non-state actors in the political discourse of Pakistan,” she said. “They are going to empower them culturally to not just be an authority on this issue, but to then make other claims on other social matters in the future. The roots of conservatism in Pakistan are already very deep, and I think legitimizing these actors will worsen the problem.”

So will this time be different? History seems to have provided a resounding answer to that central question: probably not. Moreover, holding talks in their current form, unsupported by any tangible military threat, is not the way to engender substantive change. Pakistan, experts contend, should not bend to the whims of a group unwilling to ratify its constitution and unhesitant to kill its people. The purpose of the talks, after all, is to facilitate the surrender of the enemy — not to showcase the surrender of the state.