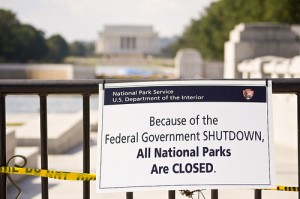 ity. But, today, we find the minority in no such danger of obliteration.

The Tea Party has in fact hijacked the functioning of the federal government.  Our democracy works because when elected officials defy the will of the people, in the words of Heidi Klum, “you’re out.” Across the country, gerrymandering has violated this system of ensured political turnover. Our senators and representatives (looking at you, House Republicans) don’t have to worry about effective legislation and simple things, like, for example, making sure the government is up and running everyday, because solid blocks of one-color electorates will keep them in office.

When representatives of the people can’t be voted out – or in – necessary, annual pieces of legislation (budgets!) get caught up in partisan policy battles while the National Institute of Health turns children with cancer away from clinical trials, 800,000 federal employees are out of work, and America embarrasses itself on an international scale as the President cancels a trip to Southeast Asia.

The Republican period of self-reflection and party reevaluation that followed its ideological and electoral defeats in the 2012 election cycle seems like a lost cause. While the gerrymandered districts ensure the short-term stability of these politicians, the Republican party might want to check out a health insurance plan that covers life-support in our newly up and running health care exchanges.