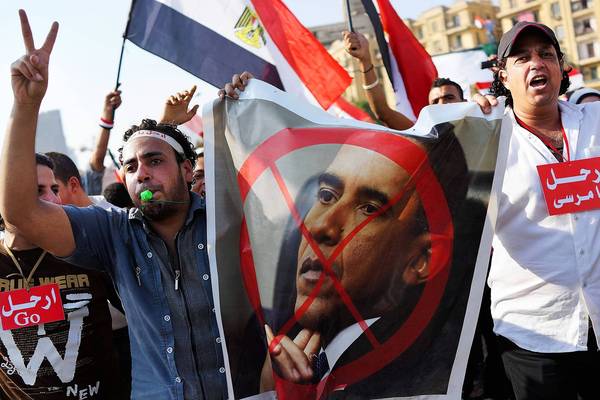 Although the dysfunction gripping Washington these days is nothing short of theatrical, its ramifications are anything but. As our nation’s leaders gripe, grumble, and pander to the cameras, one could be forgiven for thinking that events in the rest of the world stopped along with the American government. After all, with most headlines focused on speculating about John Boehner’s future, who might know that Egypt is teetering on the verge of civil war?

A crucial ally both historically and strategically, Egypt is vital in determining the future of the Middle East. Yet the extent to which the country has been overshadowed by the big egos and sharp elbows in Washington is cause for concern.

Last month, President Obama announced the partial suspension of aid to Egypt as a result of increased violence within the country. The response among the American political class was mostly muted. In fact, the strongest reaction came from those excited at the chance to punish what they see as an illegitimate Egyptian government. Contrast that with the distinctly anti-American sentiment that Obama’s actions generated within Egypt, and one gets the sense that the U.S. is playing a risky game in failing to fully stand by its Middle Eastern ally.

Egypt, the most populous Arab nation, is a regional leader and a crucial bridge between the West and the Arab world. Most visions for Middle Eastern peace also hinge on assumptions of a stable Cairo. Yet by cutting aid to Egypt, the U.S. risks undermining the fragile balance currently holding the country together.

Egypt’s economy has taken some hits as of late. Tourism, which brings in nearly $11 billion in annual revenue, has failed to pick back up since its decline following the 2011 revolution. The June ouster of Mohammed Morsi and the ensuing political chaos have also contributed to crippling market instability.

As things currently stand, Egypt has been heavily reliant on foreign aid to help meet its obligations and keep its economy from further collapse. The 1.3 billion dollars given to Egypt by the U.S. annually equates to about 0.25% of Egypt’s GDP, meaning that its complete removal will have more than a negligible impact on the Egyptian economy. This in part contributed to the anger following President Obama’s announcement.

Dangerous economic implications aside, aid cuts and associated rhetoric also carry profound implications for the way the U.S. is perceived across the Middle East. For months, critics have argued that aid to the Egyptian government should be stopped on principle, because the U.S. should not support corrupt regimes. In this case, however, to say that Morsi’s opponents were unjustified in seeking his removal is really to write them off by saying that they were unjustified in defending their own democracy.

The current arguments against the Egyptian military miss the broader point that Mohammed Morsi was acting as anything but democratic at the time of his ouster. For months leading up to his removal, Morsi systematically weakened democratic institutions throughout Egypt, seeking to bolster the Muslim Brotherhood at the expense of true electoral competition. Egyptians realized this and rose against him en masse. In this sense, Morsi’s ouster was not a blatant power grab by a power-hungry army. Rather, it was the voices of 33 million Egyptians stepping into the streets to defend the democratic gains of a mere two years prior.

Granted, Egypt’s path to democracy remains unclear. Much hinges on the military’s willingness to give up power for a second time. What role can the U.S. play? For starters, it can restore full aid and begin to show committed support for Egypt. Yes, the violence in the country is terrible. And yes, the military is increasingly unresponsive to U.S. demands, as epitomized by crackdowns on civilian protests. But tensions have soured in no small part because of strong initial U.S. support for Morsi—in the eyes of Egyptians, a seemingly undemocratic stance for a nation that proclaims itself the beacon of democracy. Re-committing to stand by Egypt would be the opening step in the critical process of reconciliation.

The outcome of the Egyptian crisis is not clear to anyone involved. But the decisions going forward will be critical to the future of the Middle East, and neither Cairo nor Washington should overlook their importance. The impact of whatever steps are taken will affect global politics for years to come, and any effects will linger long after the latest Washington drama has been forgotten.