It was the children’s protest that got me. Strollers parked in a circle around a banner that read, “I am a Child.” Crayons strewn about the marble floor of the Hart Senate Office Building, scattered on top of signs that I was sure would be hung on fridges or displayed on kitchen counters. 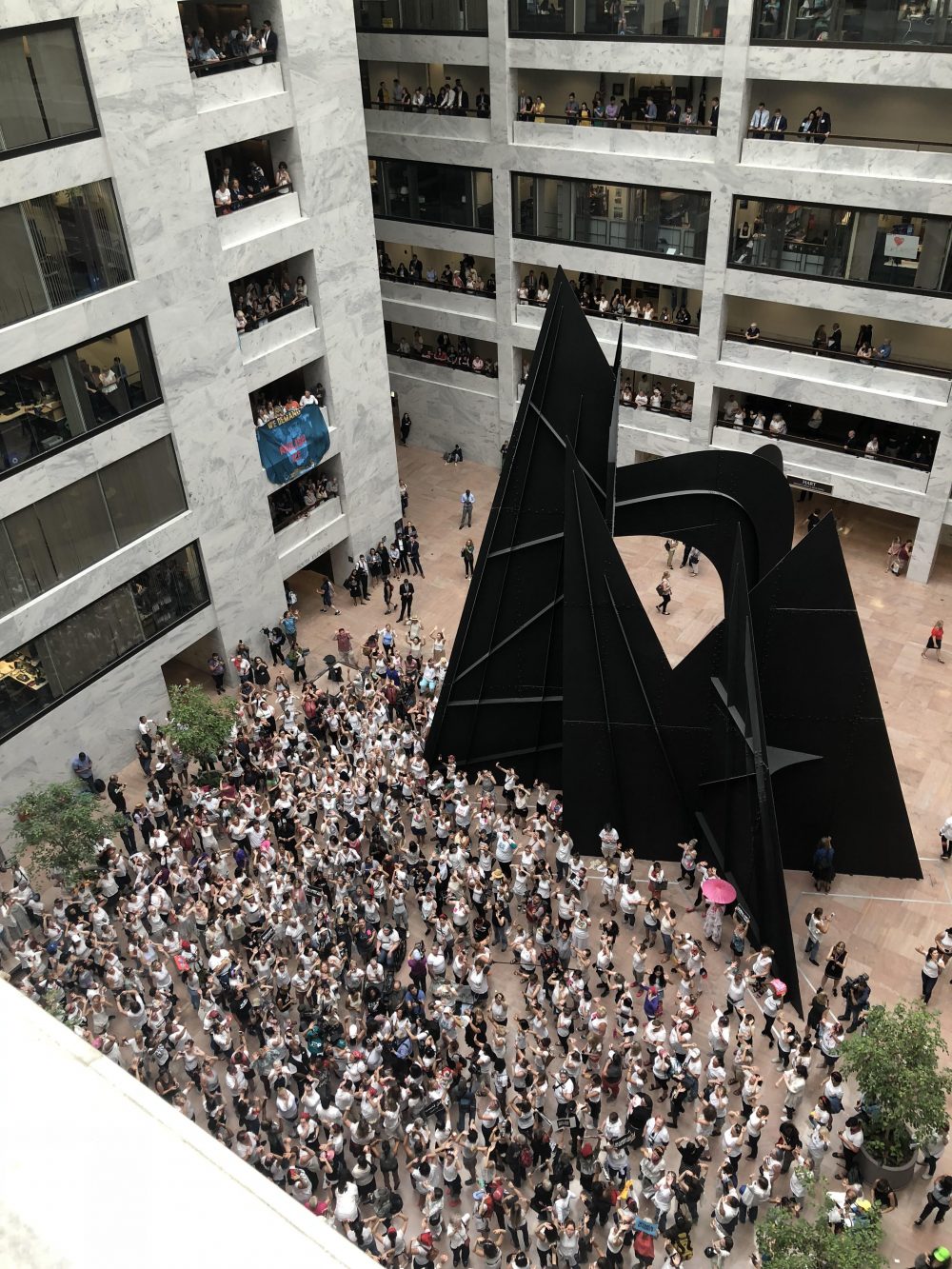 On July 26th, I ditched my intern post at the front desk to run downstairs, where a small crowd had gathered. It was the day of a court-appointed deadline given to the Trump Administration to reunite all families separated at the Southern border. A protest in a Senate office building is commonplace; a protest of children, however, seemed a novelty even to the senior staffers. An original rendition of “Happy and You Know It” bounced off the walls, filling the building with an earnestness particular to the children’s demands:

If you’re fired and you know it, stomp your feet.

If you’re fired and you know it, raise your fist.

If you’re fired and you know it and you really wanna show it,

If you’re fired and you know it, raise your fist.

A woman perched on her knees led the crowd through a call and response; from their mothers’ laps, toddlers and kindergarteners called for an end to injustice. They clapped and thrusted their hands into the air — small, tightly clenched fists not much different from the ones seen banging on tinted windows down south.

A month before, Michael Barbaro’s coverage for The Daily on June 25th was titled, “What Migrants Are Fleeing.” But the headlines the next day had already moved on to Trump v. Hawaii and Anthony Kennedy’s retirement. And, ironically, a scrappy second-gen immigrant won the New York primary for the 14th congressional district — an upset victory hailed by news media as possibly the biggest since 2016.

I watched the world go by through C-SPAN coverage of the Senate floor while the calls kept flooding in. Tell your Senator to shut her goddamn trap. You hear me? I don’t care about the damn kids at the border. I spent hours fielding legal recitations from angry Americans quoting the Immigration and Nationality Act; I listened, mhmed, and nodded. Thank you for calling. I’ll be sure to relay your message.

Before long, the words Abolish ICE were floating up past the marble walls, at first soft and singular but soon enough a crowd, loud enough to pull the staffers from their desks. The demonstrators, dressed in white, had lifted their hands above their heads, and even from the top floor of the Senate Hart Building, their banners were clearly visible: #familiesbelongtogether, End All Detention Camps, Abolish ICE.

We care, we care, we care, we care, they chanted, jolting their arms on every down beat before seating themselves on the ground. They huddled, wrapped in Mylar blankets like the ones given to detained refugee children. Their songs shook the building as the Capitol Police begin arresting older women, the grownups of #womendisobey — the protest against family separation led by the organizers of the Women’s March. The women marched out of the lobby in a single file line as if the whole thing had been planned, and now the children could stay and continue singing for justice.

I wanted to join them in their songs, clap my hands to the rhythm of their ferocious beating hearts, but instead, I took out my phone and began recording the moment: the Capitol police lifting thermal blankets with their boots, in case the teenage girls and their moms were hiding weapons under the crinkle of symbolism. “I love young people,” a middle-aged staffer with graying hair and ruddy cheeks muttered mildly before returning to his desk. 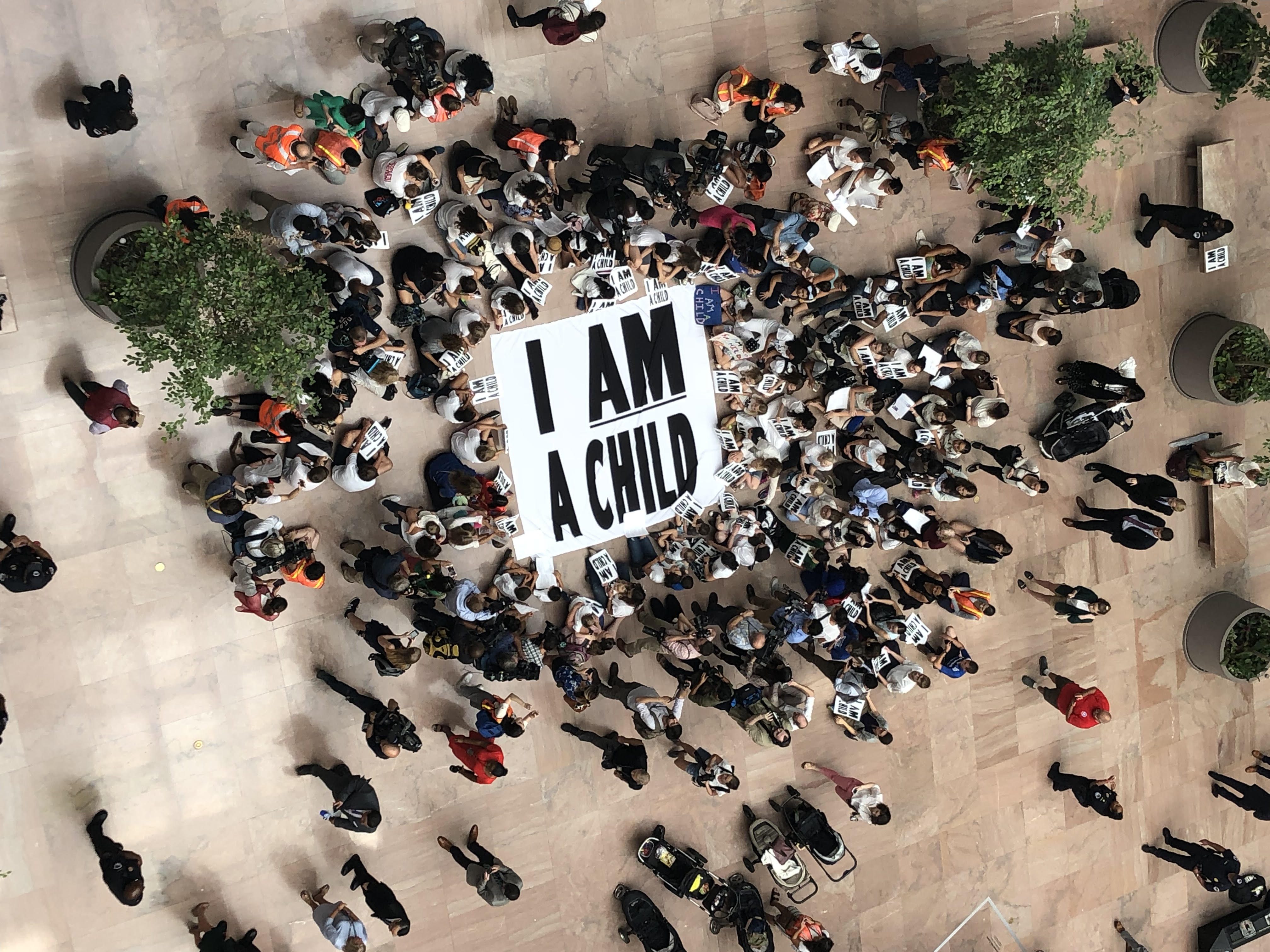 The protestors seemed to grow younger with time. Last Tuesday, at the #familiesbelongtogether protest against the Administration’s failure to meet its court mandates, I followed a ten-year-old named Luz on her way to meet with Kamala Harris. “It’s kind of frightening,” she told me. “They come here, they look for protection, asylum, and then all these policies say that they are violating the law. Just by coming here. I think that’s pretty ridiculous because they aren’t trying to harm you. They aren’t trying to cause any trouble. They’re just trying to find a place where they can fit in.” She paused, searching for the right words. “America was pretty great. Now America is, you know, down in the dumps.”

Weaving through busily coloring children, I approached the organizer, a slim woman in a midi-skirt and black cat-eye glasses. “Are you press?” she asked incredulously. I shook my head, tucking the green intern badge into my shirt. “Actually, I’m an intern. I came down because I heard the protest. But I’d still love to speak with you—I write for a student publication.” I swallowed the tremor in my voice and nudged my iPhone towards her. It was only after I returned home that I realized she was Ai-Jen Poo, award-winning activist and the director of the National Domestic Workers Alliance.

“The campaign is called Families Belong Together,” she told me, “and it’s protesting the Trump Administration’s policy of separating children from their parents and prosecuting parents who arrive at our border for seeking safety for their children.”

She was tolerant, making time for me as reporters with real badges awaited her attention. “We think that it’s morally atrocious what’s happening. We’re deeply, deeply worried about the children, many of whom have been traumatized. They’ve been separated from their parents for months and months. Children as young as 18 months old who, when they’re being reunited, don’t recognize their parents any longer.”

“What gave you the idea to bring children out here?” I asked.

In the morning, I woke up to the news of a dead child — a detained toddler who passed away shortly after her release. Through a moment of shock, I remembered Ai-Jen Poo’s departing words: “We’re just here to say that families and the people of this country are not going to stop protesting, are not going to stop paying attention. This is something we care about, and we’re going to keep fighting until all the families are reunited, all the children are safe and free, and children get to be children”