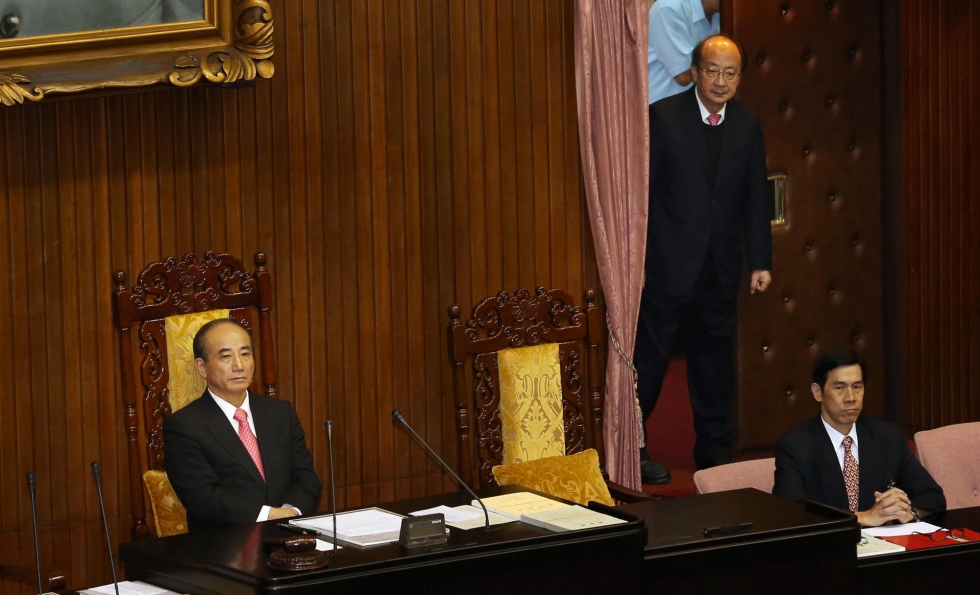 In June of last year, Ker Chien-Ming, a high-ranking Taiwanese politician in the Democratic Progressive Party (DPP), was charged with embezzlement. The Taiwan High Court found Ker not guilty, but the prosecutors decided to appeal the decision. Upon hearing rumors of an appeal, Ker did what many of us would do: he asked a friend for help.

What Ker did not realize, however, was that the Special Investigative Division (SID) of the Supreme Prosecutors’ Office was investigating him at the time. As part of the investigation, the SID tapped Ker’s phone. Thus, when Wang Jin-Pyng — Ker’s friend as well as the Speaker of the Legislative Yuan (the Taiwanese equivalent of a national parliament) — received a call from Ker, the SID was listening closely.

According to SID officials, Ker asked Wang to use his substantial political influence to prevent the prosecutors from appealing the decision. Wang agreed, and no appeal was ever filed.

On September 6, the SID exposed Wang’s influence-peddling at a press conference. As soon as the scandal went public, Taiwanese President Ma Ying-Jeou condemned Wang’s actions, declaring that the Speaker had committed a “most serious infringement of Taiwan judicial independence.” Ma’s party, the Kuomintang (KMT), quickly stripped Wang of his power as Yuan Speaker and revoked his KMT membership.

Outraged, Wang filed a lawsuit against the KMT. On September 13, a Taipei District Court filed an injunction blocking the KMT from removing Wang from power. Although Ma filed a high-court appeal of the injunction, his attempt failed, and Wang retained his position. By the end of the month, the ordeal was known across Taiwan as the nation’s “September strife.”

On October 4, Ker filed suit against Ma and KMT officials. In an interview with the Taipei Times, Ker explained that he wished “to end the evil of governing by secret agents.” The Taiwanese government promptly denied Ker’s claims, insisting that all of the wiretapping had either been conducted by mistake or approved by a warrant. The government further emphasized that the wiretapping was not politically motivated, though this claim has faced mounting skepticism in recent months.

“The evidence at hand suggests that the SID was wiretapping for political purposes,” Jau-Yuan Hwang, a law professor at National Taiwan University, told The Politic.

According to Jerome Cohen YC ’51 LAW ’55, a law professor at NYU School of Law and scholar of Chinese legal studies, politics certainly appear to have motivated Wang’s influence-peddling back in June. As the Speaker of the Yuan, Wang is responsible for ensuring that the DPP and KMT are able to collaborate and compromise in order to pass legislation.

“That’s why [Wang, a KMT member] made that phone call,” Cohen suggested, referencing the Speaker’s actions to aid Ker. “That phone call wasn’t on behalf of a KMT person; it was on behalf of a DPP person. He might not have had to make it if [Ker] had been a KMT legislator.”

Yet for all of the turmoil currently gripping Taiwan, the international press have largely remained silent. Nevertheless, the “September strife” could have very real global consequences. The scandal threatens the legitimacy of Taiwan’s leading politicians, to be sure; but even more than that, it may threaten Taiwan’s legitimacy as a nation.

The alleged wiretapping, embezzlement, and influence-peddling could irrevocably devalue the Taiwanese constitution. Patent disregard for the constitution by Taiwanese politicians, experts contend, could make the international community skeptical of Taiwan’s democratic integrity. According to Frances Rosenbluth, a political science professor at Yale University, this pattern of corruption needs to end in order for Taiwan to secure its long-term development. “Ma needs to play a clean game,” she insisted.

Written in 1946, the relatively young Taiwanese constitution is both fragile and unwieldy. The most recent constitutional amendment, passed in 2005, made it significantly harder to amend the constitution in the future. According to Hwang, the Taiwanese law professor, the amendment “makes future changes practically impossible.”

A virtual inability to revise the standing constitution is a serious handicap for Taiwan’s political system, and it may make constitutional infringement by Taiwanese politicians especially damaging to the country’s legitimacy. However, some experts in Taiwanese government believe that the so-called constitutional crisis is far less serious than the media might suggest.

The wiretapping might have been legal under the Taiwanese constitution, and the issue is far from being resolved, Alan Romberg, Director of the East Asia program at the Stimson Center and former Principal Deputy Director for the State Department’s Policy Planning staff, told The Politic.

Others have also challenged the notion that the KMT’s actions pose a threat to the Taiwanese constitution. Shelley Rigger, a professor of  East Asian politics at Davidson College, maintained, “The idea that the KMT has been trying to shut down or reverse or undermine Taiwanese democracy is really an ahistorical and overly politicized judgment.”

Underlying the entire debate — and dominating the political conversation in Taiwan — is the issue of the nation’s relationship with China.

The ongoing feud between President Ma and Speaker Wang may have serious consequences for already-strained Taiwan-China relations. Wang, a relative moderate within the KMT, favors compromise with DPP legislators and often concedes on critical issues, much to the chagrin of other KMT officials. Ma has been working for months to pass a series of 18 trade agreements with the mainland, mostly by making unilateral decisions to sign these cross-strait agreements. Wang has been pushing for more legislative influence over the agreements, which could slow down the process dramatically.

Ma’s proposals are the “first formal comprehensive cross-strait trade agreements” between Taiwan and the mainland, noted Stephen Roach, a senior fellow at Yale University’s Jackson Institute of Global Affairs and a lecturer at the School of Management. The agreements are “hugely advantageous for Taiwan,” Roach added.

Though cooperation with China is critical to Taiwan’s economic well-being, the current series of economic deals runs the risk of increasing the mainland’s influence over Taiwan. Cohen, the NYU law professor, compared Ma’s navigation of his agreements with the mainland to steering a ship between the mythical Scylla and Charybdis: “How far can you go? What’s sensible? What’s still safe?” he asked.

Cohen observed that Ma’s reluctance to give the legislature more than marginal influence stems from his fear that increased involvement of the legislature will lead to blockages, compromises, and delays in the cross-strait agreements. “If these agreements have to be vetted article by article by the legislature, [it] may lead to failure to enact or obtain approval of all these provisions,” Cohen said.

According to Hwang, the National Taiwan University law professor, “Wang wanted to slow down the whole process and let the [Yuan] have a real discussion on the merits of the trade agreement.” Such a proceeding could have taken more than a year, he noted.

Despite the KMT’s majority in the legislature, even Ma’s most highly prioritized agenda items have had difficulty receiving approval, said Rigger, the Davidson College professor. “It’s not the case that he’s pushing things through without legislative approval. He’s not even getting things through with his own party in control.”

Considering the political rivalry between the KMT and the DPP, as well as the apparent importance of Taiwan-China trade relations, the dispute over cross-strait trade agreements may have been the real reason for which Ma tried to oust Wang from his position as Speaker of the Yuan. Yet now that Ma’s attempt to remove Wang has failed, the future of these agreements — and with them, Ma’s diplomatic legacy — is far from certain.

Hearings regarding the KMT’s actions against Wang began this past December and are scheduled to continue in March. The Taipei District Prosecutors Office indicted Prosecutor-General Huang Shih-Ming in October 2013 for wiretapping Ker and divulging the results of those taps to Ma and the public.

In spite of the scandal, China-Taiwan relations have grown increasingly warm since last autumn. This past February, the two countries held their first high-level talks since Taiwan’s split from the mainland in 1949.

“It seems that the crisis has ebbed but is not yet completely reined in,” observed T.J. Cheng, a professor of government studies at the College of William and Mary. The KMT appears to have realized its mistake and, in an attempt to rectify its relations with the DPP and with the public, is allowing the dust to settle.

Cohen, who spoke with Ma on his most recent visit to Taiwan, said that the President is “trying to focus on different things.”

As the 2016 presidential election approaches, Ma certainly needs the country move on from this crisis. His current approval ratings — between 9 and 13 percent — indicate that he is unlikely to win his reelection bid in 2016. Hwang affirmed that it would indeed be difficult for Ma to recover from this autumn’s scandal.

Although the DPP strongly opposes the current status quo — neither unification nor independence — many experts believe it seems to be the safest option for Taiwan. Cohen said that he is “already starting to worry” about the DPP nominating a radically pro-independence candidate for the 2016 presidential election. If the DPP rallies behind a candidate pushing for independence, underlying tensions with China could flare.

“The United States does not want to see a return to political power of someone like [former President of Taiwan] Chen Shui-Bian,” said Cohen. “A Taiwan independence leader becoming president again would create a crisis in U.S.-China relations and present an enormous risk to American security… We don’t want to have to go to war to defend Taiwan because somebody in Taiwan declared independence.”

Nevertheless, despite potentially severe economic and political ramifications, the global media have largely ignored these wiretapping allegations, embezzlement schemes and political feuds. This general silence, in fact, appears to discount the importance of Taiwan’s political incidents in the past year.

Ultimately, these events reveal that corruption and instability exist even in a relatively robust democracy like Taiwan’s, casting new doubt on its potency, legitimacy, and durability.