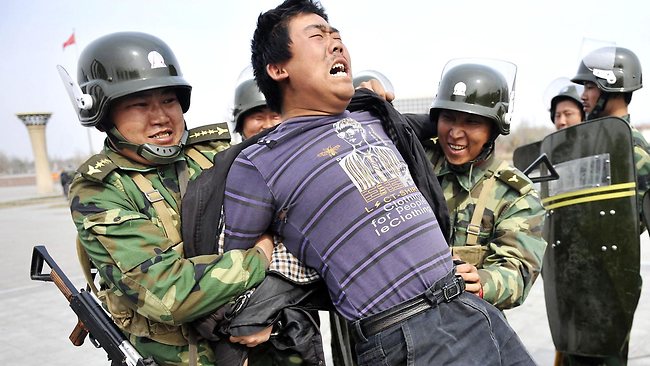 Xinjiang, China’s largest and westernmost province, is home to over eight million Uighurs, a Turkic-speaking, predominantly Muslim ethnic minority. The Uighurs have lived uneasily alongside China’s Han majority for centuries, ever since the Qing dynasty seized control over Xinjiang—which lies above Tibet and shares borders with many Central Asian countries—in the 1700s. There are now just slightly more Uighurs in the province than Han Chinese, who have migrated en masse to Xinjiang in recent decades.

Four Julys ago, a spate of ethnic violence rocked Urumqi, the regional capital of Xinjiang. Clashes between Uighurs and Han Chinese killed nearly 200 people and injured over 1,000, according to official estimates. The 2009 riots were a culmination of decades of Uighur-directed religious repression and economic discrimination—as well as a serious indication of deteriorating Han-Uighur relations.

It comes as no surprise, then, that in late June, shortly before the fourth anniversary of the riots, Xinjiang witnessed another major outbreak of violence. According to state media, “knife-wielding mobs” attacked police stations in Turpan prefecture, resulting in the deaths of 35 people. Just two days later, over one hundred rioters attacked a police station in Hotan Prefecture, although no fatalities were reported. These incidents came at the heels of aviolent confrontation between Uighurs and Chinese authorities this past April that left at least 21 people dead. Clearly, ethnic violence has long been the norm in Xinjiang.

Something else that has seen little, if any, change over the years has been the Chinese government’s response to Uighur-related unrest. Soon after the latest upsurge of violence, party leaders, including President Xi Jinping, pinned the blame on “ethnic separatist forces at home and abroad”—which has become the customary official response to any instability in Xinjiang, regardless of whether or not it has any basis in reality. The Chinese government has long linked violence in Xinjiang to militant groups seeking an independent homeland, such as the East Turkestan Islamic Movement (ETIM), which allegedly has ties to Al Qaeda and has been responsible for past terrorist attacks in China. A state-run newspaper went so far as to attribute the recent violence to Uighur militants who had been trained in Syria by fighting alongside rebel forces.

However, there is no evidence that recent incidents were the work of terrorist groups like ETIM. It is far more likely that they were spontaneous skirmishes provoked by Beijing’s increasingly repressive policies and security measures in Xinjiang, which have driven many ordinary Uighurs to a point of desperation. According to Reza Hasmath, a lecturer at the University of Oxford, the official narrative that Xinjiang’s ethnic violence is orchestrated by foreign actors allows the Chinese government to skirt the reality that much of the violence is homegrown and stems from prolonged religious repression and economic marginalization. By blaming domestic instability on foreign interference—as it also does whenever something happens in Tibet—the government is able to deflect attention away from deeply local sources of ethnic unrest.

A major culprit of Uighur resentment has been the government’s draconian restrictions on religious and cultural practices. For instance, children under the age of 18 are not permitted to worship in mosques or pray in schools, and Chinese officials are replacing the instruction of the Uighur language in schools with that of Putonghua, the standard Chinese language.

However, as Hasmath notes, the primary source behind Xinjiang’s ethnic violence is most likely socioeconomic in nature. Xinjiang is one of China’s poorest provinces and has high unemployment rates, especially among Uighurs. Those who do have jobs often work in low-paying sectors of the economy. The large-scale migration of educated, technically qualified Han Chinese to Xinjiang has produced severe economic inequalities and stoked Uighur resentment, as Han Chinese are disproportionately concentrated in professional and managerial occupations. This unequal access to the labor market, according to Hasmath, “creates and reinforces existing spatial divisions,” so that Uighurs and Han Chinese live in ethnic enclaves and rarely interact meaningfully with each other.

In May 2010, the Chinese government announced a stimulus package for Xinjiang aimed at raising the per-capita GDP in the province to the national average within five years. However, the stimulus package will likely only widen the economic disparity between Uighurs and Han Chinese. It primarily targets industry and communications, therefore benefitting more Han Chinese than Uighurs. Additionally, it invests heavily in bingtuan, a state-run organization that operates several Han-dominated, politically autonomous settlements in Xinjiang. Thebingtuan has its own militia force, courts, and schools; manages hundreds of enterprises; and produces almost one-sixth of Xinjiang’s GDP. Although the Chinese government intends thebingtuan to promote stability in Xinjiang, its exclusionary settlements seem to be doing exactly the opposite. The fact that bingtuan settlements are growing in size and spreading across the province certainly doesn’t bode well for future Uighur-Han relations.

Current state policy toward Xinjiang is only exacerbating ethnic tensions and making the possibility of future clashes more likely; the latest round of violence demonstrates just how ineffective the Chinese government’s heavy-handed policies have been in suppressing unrest. If party officials really want social stability in Xinjiang, they had best stop blaming the ethnic violence on overseas terrorists—and start paying attention to the many homegrown inequities in the province.