On January 6, hundreds of New Haven residents gathered on the corner of Grand and Ferry Streets, in the heart of the the Fair Haven neighborhood. Given the date, an onlooker might have assumed the event was a celebratory one marking the end of the winter holidays and the beginning of a new year. But anyone taking part in the gathering would say otherwise. The atmosphere there was not one of joy, but of fear.

Weeks earlier, those in the crowd—the immigrant community of New Haven—received a jolt in the form of a warning. On December 23, 2015, the Washington Post released confidential information it had received from a White House staffer, announcing that the Department of Homeland Security had “begun preparing for a series of raids,” with the ultimate goal of deporting “hundreds of families” who had entered the United States (U.S.) illegally since 2014. The Post reported that Immigration and Customs Enforcement (ICE) planned to target people who had already “been ordered removed from the United States by an immigration judge.”

According to Unidad Latina en Acción (ULA), 155 New Haven residents fit this description, and most of them are women and children who had fled gang violence in Honduras, El Salvador, and Guatemala. The leaked White House note also forebodingly stated that all adults and children found would be detained and deported, and that “hundreds” would be targeted.

Naturally, this set the nation’s undocumented immigrant community into a frenzy. For any resident of New Haven without legal status, the thought of facing an ICE agent can be debilitatingly frightening––frightening enough to make parents keep their children home from school, where ICE raids might possibly occur.

Karim Suarez, a community organizer working with ULA, told The Politic, “The superintendent will tell you there were more than 30 children missing from each school.” With rumors of ICE agents in their midst, many Latinx immigrant residents became apprehensive of New Haven police officers, whom they thought might potentially be cooperating with ICE.

“They thought, ‘If I go in and speak to some type of law enforcement they’re immediately going to turn me into immigration,’” said Suarez.

Ana María Rivera-Forastieri, Director of Advocacy and Program Development at Junta for Progressive Action, an NGO that offers programs and services in the aim of empowering Latinx and low income communities, said that this time bred “a sense of fear that you couldn’t get out of your house or continue with your regular daily activities because immigration might come and get you.”

These feelings may have been cultivated by the White House notice, but the seeds of the fear had been planted years before. In 2007, the immigrant community of New Haven experienced one of its first major convulsions.

Fair Haven, a neighborhood with a large population of Latinx immigrants, was the target of a series of unexpected ICE raids. “Out of nowhere they knocked down doors,” remembered Suarez. Thirty-two peo- ple were taken out of their homes and detained. “So this time,” said Suarez, “we wanted to prepare the community.”

It was to this end that so many people gathered on January 6, on Ferry and Grand Street: to prepare. Or at least, to hear information that might illuminate future prospects that at the time were so cloudy with uncertainty. The rally was organized by ULA in conjunction with Junta for Progressive Action and Connecticut Immigrant Rights Alliance (CIRA)–all organizations known for their long-term advocacy for the Latinx community in New Haven.

The goal of the rally was to empower Latinx immigrants in a time when many were feeling powerless. The main event was a dramatic reenactment of what an ICE agent coming to someone’s door demanding proof of legal status looks like. Fliers were distributed under the heading “Know Your Rights,” detailing how immigrants should act if placed in a defensive position against immigration control. For example, the fliers reminded people that they have the right to not open their doors to an ICE agent and to demand that the agent slide their search warrant under the door. 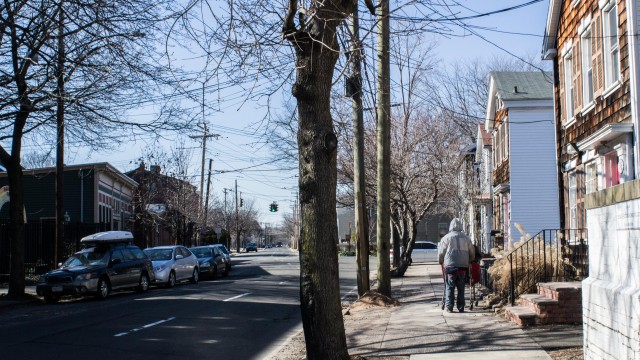 The flier also alerted people of their right to remain silent. Rivera-Forastieri confessed that even if passing out fliers and putting on skits cannot prevent an ICE raid from occurring, “At the very least it will give folks a little bit of guidance on what to do, who to call, and how to act, which we hope will prevent really bad things from happening.”

For a person outside of the undocumented immigrant community, it may be difficult to understand the panic that would cause parents to hold their children home from school, businesses to halt operations, and people to gather in Fair Haven. After all, one could say, the worst case scenario is that the targeted undocumented immigrants are sent back to their home countries, going back to where they started.

To this, Suarez said: “What many people don’t know is that many of these families are coming from very violent, very hostile environments… Many of our ULA members are running away from not just gang violence, but domestic violence and human trafficking.”

While some may come up North, enticed by the prospect of economic opportunities, many immigrants, especially those who came in the recent wave from Central America, come to seek asylum. However, a 2014 study by Syracuse University found that approximately half of people who apply for asylum are denied that status, leaving many of these refugees an ominous choice: either obey the law and go back to their home countries or protect themselves by remaining in the U.S.

As much as the Washington Post report shook immigrant residents in New Haven, community organizers said they were not surprised by the Obama administration’s authorization of the ICE raids. The timing of the announcement came as a shock, given its proximity to the holidays, but as Rivera-Forastieri commented, “The tactics are very similar to things they’ve done in the past, persecuting our families and our community.”

Suarez of ULA felt similarly: “I’m not surprised, because the Obama administration has been the administration to deport the most amount of families within his presidency…. He is the ‘deporter in chief.’”

This is a title President Obama has borne among immigrants’ rights advocates since 2013, when it became clear that his administration had deported more immigrants in the first five years of his presidency than the Bush administration had in its entire eight years. According to a recently published figure on the Immigration and Customs Enforcement website, ICE has deported 2,878,672 people since 2008.

Numbers like this do little to reassure community activists and the New Haven immigrant community. So if the fear among many immigrants is that they will be deported because of their lack of documentation, why do they not obtain these documents and apply for citizenship?

According to Rivera-Forastieri, “The reality is that for the majority of people there is no pathway to citizenship.” She added that, unless one has family ties in the U.S. or an employer that is willing to petition for them, the chances of being granted citizenship are very slim.

This is because of what the American Bar Association (ABA) calls “a nationwide due process crisis in our country’s immigration court system, a system that is already signi cantly overburdened and under-resourced.”

Rivera-Forastieri said, “Our immigration system is incredibly broken…. it’s very hard to become a citizen if there’s no kind of immigration reform on the books, and we know that that has been the case for quite some years now.”

Indeed, Congress has been stalled in the process of immigration reform since 2013, when the Senate and House of Representatives disagreed over comprehensive immigration control package. However, in 2012, one good thing happened: the Deferred Action for Childhood Arrivals (DACA) legislation passed.

According to the policy’s website, DACA is intended for youth who are “Americans in their hearts, in their minds, in every single way—except on paper.” DACA applies to undocumented immigrants between 15 and 35 years of age who came here before their 16th birthday, have graduated or are currently enrolled in high school (or are pursuing a GED), and who have not been convicted of a felony, among a number of other requirements. DACA allows those who are eligible to do things such as apply for a work permit, open a bank account, and apply for a credit card or a driver’s license; things they wouldn’t be allowed to do otherwise. In the present situation, however, DACA can do little to help. For the most part, the people that ICE is hoping to target do not fit under the category of DACA recipients.

So now, over a month after the initial scare, there is one question that is doubtlessly on many people’s minds: How badly will an ICE raid affect New Haven?

City leaders are determined to keep undocumented immigrants safe in this sanctuary city. At the January 6 rally, Mayor Harp, New Haven Police Department Chief Dean Esserman, and school superintendent Garth Harries all made an appearance and reassured the community that New Haven would not comply with ICE agents in an effort to help undocumented populations.

But until Secretary of Homeland Security Jeh Johnson, or someone else from the Obama administration, confirms that the raids have ended, community leaders must continue to work. “The phones have to be on 24/7” Suarez said, referring to ULA’s immigration hotline. “There are families who are still hearing about this….and they need lawyers and they need help.”

Rivera-Forastieri added, “I don’t know that I can speak about the likelihood of an ICE raid taking place in New Haven or not, but I do think that if there’s a city that is going to fight against something like that happening, it’s the city of New Haven.”