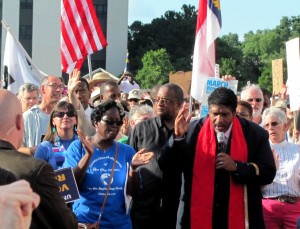 The 26th Amendment to the Constitution unequivocally states: “The right of citizens of the United States, who are 18 years of age or older, to vote, shall not be denied or abridged by the United States or any state on account of age.” So why are state legislatures across America trying to limit a right clearly inscribed in the Constitution? It’s simple: political gain.

Leaders of many Republican legislatures understand that students are a Democratic constituency; in the 2012 election, President Obama received 60 percent of the youth vote. Making it harder for students to vote will suppress the youth turnout, giving Republicans a better chance of retaining power. While many state legislatures have passed laws attempting to marginalize students, perhaps the most egregious example is North Carolina House Bill 589, also known as the North Carolina voter ID law.

HB 589 requires voters to present a government-issued photo ID at the polls – including a North Carolina driver’s license, a special ID for non-operators, a U.S. passport, a military or veteran ID card, or a tribal enrollment card. A voter can only present an out-of-state driver’s license if this individual registered to vote within 90 days of the election. This means that student IDs will no longer be accepted, which disproportionately affects out-of-state students. They will have to undergo the laborious process of applying for a voter ID at a North Carolina DMV in order to vote. Roughly 50,000 students attending school in North Carolina are originally from another state.

In order to receive a voting card, all 50,000 students will have to present proof of their age and identity, social security number, and residence – in the form of multiple documents, such as a social security card, driver’s license and vehicle registration, and U.S. passport. It would be a gross understatement to say that most college students do not have these necessary documents at their fingertips.

Moreover, students that apply for a voting license from the DMV must wait 10 to 20 days for their IDs to arrive. Those that register shortly before Election Day may not receive their IDs in time to vote.

Sadly, even in-state students do not escape the effects of NC HB 589. The address listed on most students’ drivers’ licenses is often their parents’ address and does not match their college residency, which can lead to disenfranchisement. Sonia Gill, an attorney for the Voting Rights Project – an initiative by the Lawyers’ Committee for Civil Rights Under Law to ensure fair, equal voting rights for U.S. citizens – observed that similar legislation in Ohio has produced “confusion among poll workers and highly reported problems.”

“Students are very transient,” she continued, “and so many of the addresses on their government IDs don’t match their registration address, causing many students to have to vote provisionally.”

Invalidating student IDs as a form of voting documentation is just one of the many provisions of NC HB 589 that will discourage youths from going to the polls. Previously, 16- and 17-year-olds in North Carolina could preregister to vote, so that when they turned 18, they would automatically be able to cast a ballot. The voter ID law eliminates the preregistration program.

“This sends a very clear message that the North Carolina General Assembly is not interested in encouraging youth involvement in democracy,” said Chris Brook, the legal director of the American Civil Liberties Union of North Carolina.

Supporters of the North Carolina voter ID law assert that requiring a government- issued photo ID reduces fraud and safeguards ballot authenticity. After signing the bill into law, Governor Pat McCrory declared that the reforms “will protect the integrity of one of the most precious rights guaranteed in our state constitution, the right to vote.” However, only 121 of the 7 million ballots cast in North Carolina in 2012 were alleged to be instances of voter fraud. This amounts to a staggeringly low .0017 percent of total ballots, disproving claims of endemic voter fraud.

Although HB 589 is especially restrictive, many other state legislatures have crafted similar laws. “While the North Carolina law charts new ground in the scope of voter laws, the idea of discouraging youth participation in voting is not new,” Brook of the ACLU points out. “For example, a hunting license serves as a valid photo ID in Texas, but a student ID does not.”

Tennessee also does not accept student IDs at the polls, and Wisconsin passed legislation in 2011 that required student IDs to be renewed every two years – a problem for undergraduates at four-year institutions. Nonetheless, these new laws have met resistance: the voter ID laws in Tennessee and Wisconsin have faced extensive legal battles, and the United States Justice Department recently sued both Texas and North Carolina over their new laws. Will the rulings favor college students across the U.S.? History casts doubt on this notion.

The 1979 Supreme Court decision Symm v. United States affirmed the 26th Amendment by granting all college students the right to vote in their college towns. While the voter ID laws in states like North Carolina and Texas do not explicitly bar students from voting, they impose heavy burdens that will effectively disenfranchise a large percentage of college students. U.S. Attorney General Eric Holder has promised to aggressively defend the right to vote, but if the lawsuits reach the Supreme Court, the Obama administration may not find a sympathetic ear. As demonstrated by the Shelby v. Holder ruling – which struck down the Voting Rights Act’s requirement that attempts to change voting qualification laws receive preclearance from the U.S. Department of Justice or the U.S. District Court for the District of Columbia– the Roberts Court has given states more autonomy in determining voting procedures.

Even without relief from the judicial branch, students can still try to protect themselves from the assault on their voting rights. By understanding and spreading awareness of the new voting requirements, students can reduce the impact of the voter ID laws. Gill of the Voting Rights Project has been impressed by how many students are “protesting against the new laws and mobilizing resources to increase youth registration.”

Indeed, opposing limits on student voting should not be a partisan issue: the new voter ID laws ensure that all students, whether Democrat or Republican, will face undue restrictions on rights that are clearly enshrined in the Constitution.