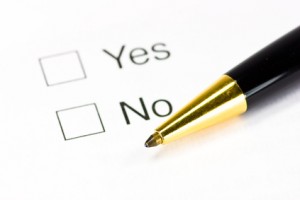 I was watching “The Daily Show” earlier, justifying it as I always do as “educational” and therefore a legitimate substitute for my homework, when Jon Stewart made a point that made me declare out loud to my empty room, “Yes!” He mercilessly mocked several news outlets (CNN bearing the brunt of his ire) for forcing false dichotomies on complex political situations. As usual, his countenance and delivery made for a hilarious segment. My laughter, raucous as it was, dislodged a thought I’ve been having for a while. All of a sudden I wasn’t laughing anymore.

How many polls have you seen in the past few months along the following lines:

“Do you think John Boehner should be replaced as Speaker of the House?”

“Are you concerned about your healthcare under Obamacare?”

“Do you agree that most of Congress doesn’t deserve re-election?”

Because why on earth are you encouraging me to condense my opinions about issues so complex into a meaningless sound-bite? Even more concerning are questions that oddly propose pseudo-solutions that in turn dominate our political discourse.

If you ask me whether John Boehner should be replaced, my but will be that the unbelievable influence of the Tea Party means that the next guy probably wouldn’t fare all that much better. If you ask me whether most of our congresspersons deserve to be replaced, my but will be that this solves little since they’d be replaced by individuals just as green, polarized, and with a disregard for the unspoken rules that keep (or kept) things civil in Congress. If you ask me if I’m concerned about healthcare, I’ll freely admit that my grasp on economics is imperfect and that I think access to affordable healthcare is a human right. The but will be that I want to learn more about what’s really happening right now, preferably without anyone yelling.

So what I want to know is, where are my questions on campaign finance reform? On domestic drug policy? On foreign interventions? I want a question that really makes me think, “hm, I’m not sure.” But the news media is having none of it.

In one episode of “The West Wing,” an aide to the President accidentally lets slip to the press that the President doesn’t like green beans. The Press Secretary panics, fearing that thousands of green bean farmers in the swing state of Oregon may punish the President at the polls. Charlie, the aide, tells her to chill out — why shouldn’t Oregonians be able to look past President Bartlet’s taste in vegetables and vote on his policies? They’re not stupid. The Press Secretary responds that everybody’s stupid in an election year. “No,” says Charlie. “Everybody gets treated stupid in an election year.”

It feels like every year is an election year, and I for one am tired of being treated stupid. Haven’t we had enough of poll questions that are intended only to further entrench us in our own views, highlight how fundamentally we disagree with our fellow Americans, and fail to encourage us to examine the inconsistencies and gaps in our own reasoning?

Admittedly the questions I’m after are a little harder to write, and I fully recognize the staggering pressure to keep up with other networks that are polling in the same way on all the same issues. But if you treat us stupid, we’ll be stupid. So, News Media, maybe you’ve just all got to agree to make a change at the same time. Maybe you’ve all got to agree to bring the but back to the table. [The but; an endangered species in today’s political climate.] The media can help us bring it back. Those who embrace equivocality, nuance, and complexity are far and few in between and the death of the but has resulted in the ear-covering, your-beliefs-are-the-antithesis-of-my-existence, la-la-la-I-can’t-hear-you culture we’re drowning in.

Let’s call on CNN, MSNBC, ABC, CBS, Fox and the rest to get it together and play an active role in seriously engaging all of us — Democrats, Republicans, Independents, die-hard news junkies, political virgins, and everyone in between. Ask us the real questions and see how it goes. I imagine, slowly and gently, you’ll acclimate us to issues we perhaps don’t know too much about but have been encouraged to scream our opinions on for far too long. And slowly but surely, we’ll start to have the right conversations in the right way — quieter, more civil conversations. Ones in which we get comfortable with shades of grey. And if we really and truly get to a place of appreciating nuance and deliberation, we’ll eventually elect men and woman who are equally nuanced and deliberate.

That’s one way to fix this mess.