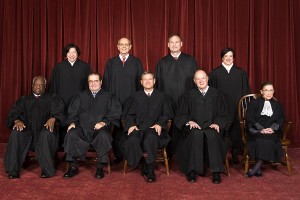 The Supreme Court’s decision in McCutcheon et al. vs. Federal Election Commission Wednesday, which abolished aggregate campaign giving limits by individuals, seemed to be the latest in a line of decisions to increase the reach of the mega-wealthy’s influence in American politics. Taken in the context of the Citizens United ruling, which prohibited the government from restricting corporations from giving to campaigns; the rise of the Super PAC; and the billion dollar presidential campaigns, this decision has been decried by many as a sign that America’s politics are inching ever closer to oligarchy and elitism. John Earnest, a White House spokesman, warned that the decision “eviscerates” campaign finance laws, and Senator Bernie Sanders (I-VT) tweeted, “To equate the ability of billionaires to buy elections with ‘freedom of speech’ is absurd.”

But the Supreme Court’s job is not to swing the tides of the political seas.  Its job is to rule on the constitutionality of laws, and Wednesday it did just that.

While the image of billionaires “buying elections” is surely a powerful one, that is fortunately not what this decision allowed. It did not change the individual campaign donation limit, which is $5,200 per campaign per election cycle ($2,600 for the primary and $2,600 for the general election), $5,000 to some PACs, or $10,000 to state parties. What it did was lift the ban on total donations one could make, which had previously been set at $48,600.

Logically, this argument should be easy to follow. If we have decided that a person can exercise his First Amendment rights to free speech by donating $2,600 to a political campaign without corrupting the political system, then there is no difference between his contributing to the first 17 campaigns and his contributing to the 18th. Perhaps there is an argument that campaigns should not be privately funded, or there should be a cap to the total amount of each campaign’s funding. But that is not the question the Supreme Court was asked to settle; they were merely asked whether, given the individual campaign limits, aggregate donations should exist. It is easy to see how this conclusion can be reached.

Granted, the ruling is not perfect in and of itself. One could conceivably see a loophole in which a donor is able to create multiple PACs, donate the $5,000 to each one, then have all of his PACs fund the same candidate’s campaign. This argument—that there were many loopholes in the law—was the thrust of the dissents in the Supreme Court. Yet it is hard to see how this decision necessarily creates significant loopholes that could not have also been circumvented before it was handed down. For the time being, this seems to be a decision that will have much less bearing on future elections than many would like to admit.